The history of the Lassen volcanic center then proceeds differently.

From there 310,000 years , the activity involves the north side of Tehama / Brokeoff volcano , where more silicic eruptions produce the Lassen dome field , a heart of dacitic domes, surrounded by an arc of hybrid andesitic flows The Lassen Peak on the left and in the foreground , Chaos Crags - photo Dan Dzurisin / USGS Dacite domes are divided into two sequences after the age of eruptions :
The Bumpass sequence, of 300,000 to 190,000 years , has produced a group of 15 dacitic to rhyodacitic lava domes in the southern part of the field.
Eagle Peak sequence , of 70,000 years to the present day , is the mother of more than seven dacitic to rhyodacitic lava domes, lava flows and pyroclastic deposits in the northern part of the field . This sequence includes the formation of two prominent structures: the Lassen Peak, 27,000 years old , and Chaos Crags 1,100 years old , and the products of the five oldest eruptions.

Similarly andesitic flows are divided into two groups: the older Twin Lakes sequence , dated from 315,000 to 240,000 years , and Twin Lakes youngest sequence , 90,000 years to the present day . Clustered cones and lava flows are located primarily on the central plateau of Lassen Volcanic Park and around the Lassen dome field .

It should be noted that these various sequences are characterized by a series of lava formed by a continuous process of magma mixing , producing variable rock units in composition and appearance. 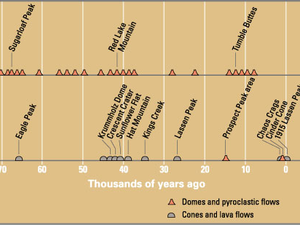 The two most recent marking the volcanic eruptions center :
- Around the year 1666, a period of activity of several hundred years built the complex Cinder Cone .
- The apical Lassen Peak eruptions from 1914 to 1917, are the latest episode of activity center.
They are considered part of the young sequence Twin Lakes. More in detail , the eruption of Chaos Crags :

The development of Chaos Crags happened during a typical basaltic volcanic cycle , dated there 1100 1000 years.
The initial activity formed a cinder cone , set up two pyroclastic flows and grows a dome that has corked the vent.

After an interval of about 70 years , the dome was pulverized by an explosion , which caused a pyroclastic flow and ash fall, visible in the drainages of Manzanita and Lost Creek located within 10 km. Chaos Crags.

This eruption was followed by the growth of five domes , three presented avalanches collapse of the dome. Chaos Jumbles was formed 700 years later when the domes collapsed in a series of three avalanches of blocks. (Wood & Kienle )
The morphology of the domes has hardly been modified by erosional processes. The eruption of Cinder cone :

Cinder Cone, 215 meters high , is located northeast of Lassen Peak.
Its eruption in 1666 is responsible for five lava basalto - andesitic and andesitic lava flows, forming two cinder cones and ash fallout over an area covering 200-300 km ² ... all this in a short time .

The remains of the original cone are still visible on the south side of the larger of the two cones currently present (see the lava flows map  ) .