Kilauea - more than five years of activity to Overlook crater. Kilauea - Crater Overlook 06/06/2014 - a slight degassing lets see the edges of the crater and the lava lake -. USGS-HVO Photo

More than five years of volcanic activity at Halema'uma'u summit crater ... a celebration at two speeds !

A long and nice activity :

The longest Kilauea summit eruption, since 1924, began in early March 2008

The contradictory warning signs were  intrigued volcanologists from November 2007. Tremor level above the normal suggested magma movements under ground, as an increase in SO2 emissions. By against, a deflationary phenomenon marked the summit of Kilauea.

On March 19, at 2:58, a crater, 35 m. wide, opens under the fume area and an explosive eruption projected incandescent fragments from the old floor and walls of the Halema'uma'u. A few days later, juvenile material is ejected from the new pit crater, now called " Crater Overlook ".  A helicopter flight on September 5 will confirm visually the presence of a lava lake located deep in the crater Overlook. 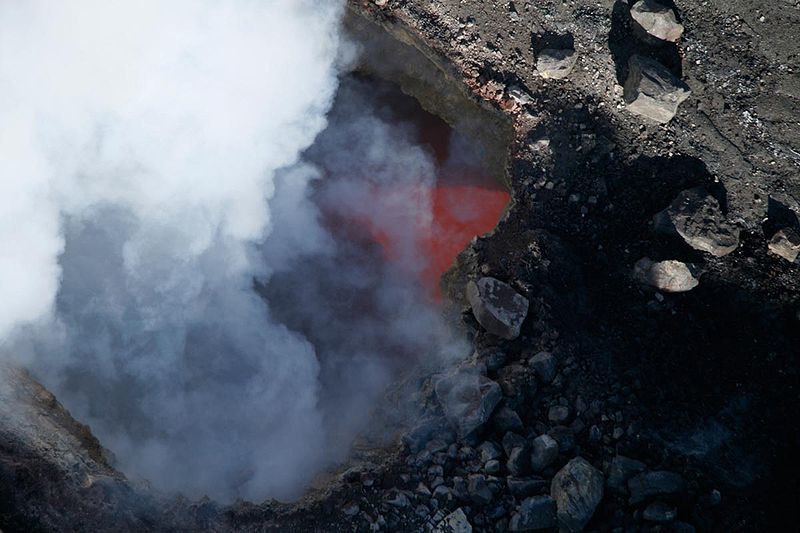 Despite fluctuations in level, the lava lake in the crater remains deeply, and is seen occasionally.

In mid-February 2010, the permanent lava lake in the crater appears in the Overlook crater, along with an inflation of the summit. It will persist until the end of 2013, with a brief interruption of a week in March 2011, following a depressurization of the magmatic system in relation to the eruption Kamoamoa. 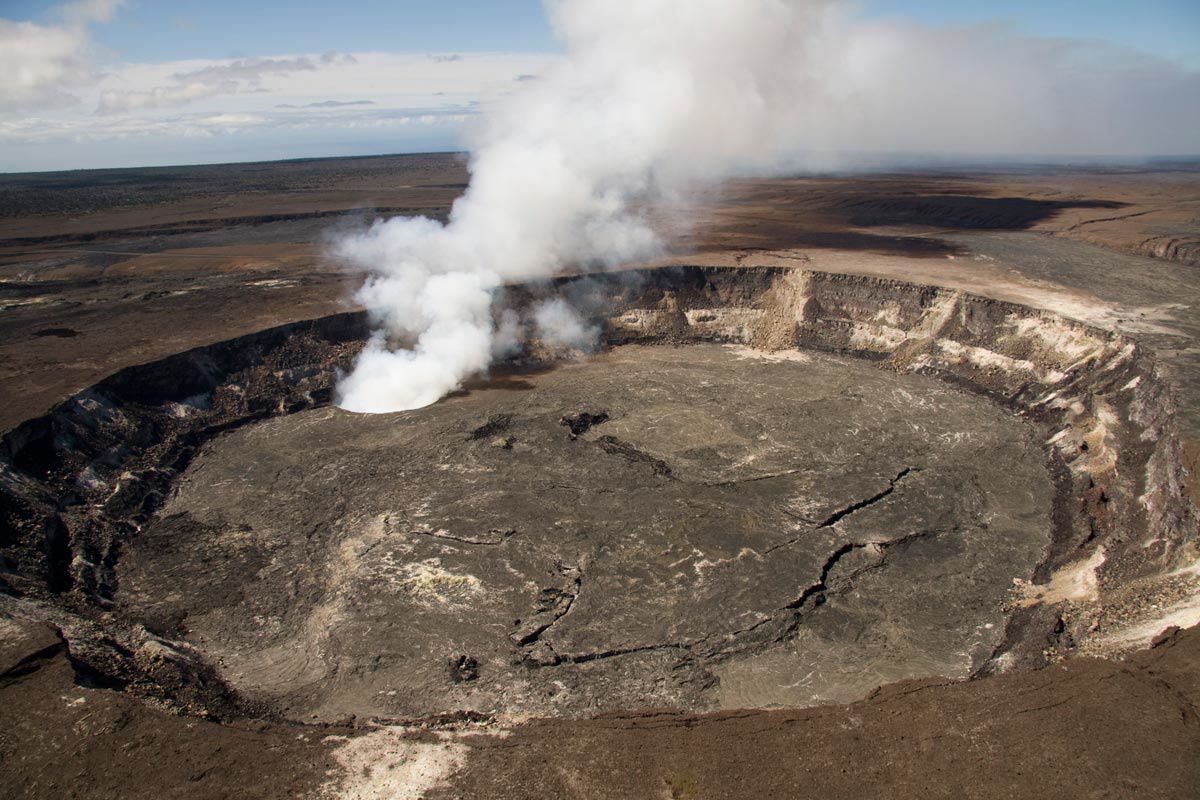 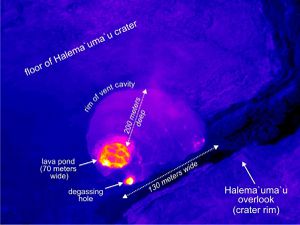 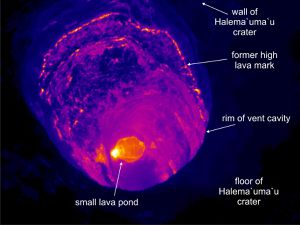 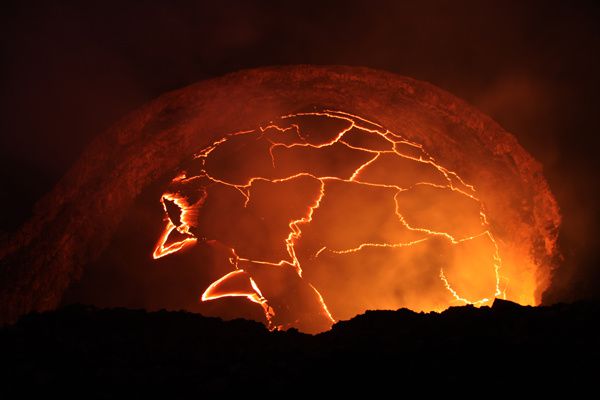 Fluctuations in the level of the lava lake are related to gas pushing the lava upwards, then escaping, with a falling of the lake levels. These cyclic oscillations let vary the level between 22 and 220 meters below the Overlook crater rim. The lake level also depends on the magma supply at the East rift zone and the eruption of Pu'u O'o.

The plumbing system of Kilauea, and feeding the lava lake summit and east rift zone in the start of a magma chamber in sub-surface - J. Johnson Scheme 2000 / USGS-HVO

The activity of the lava lake has weakened the walls of the pit crater and it has grown to reach in late 2013, following various collapses, the respectable dimensions : 160 x 215 meters. These wall failures generated episodes explosives, causing it to close the areas near the crater. Between these explosions, the continuous emission of a plume carries droplets of lava, that produce Pele's hair and tears, and ash.

The 500 to 5,000 tons of sulfur dioxide emitted into the atmosphere every day generate a VOG / a volcanic SMOG. This acid mist causes respiratory and eye irritation on the exposed areas of the west, and with the wind conditions, on other populated areas of Hawaii.

Acid rain degrade equipment and roofs around, may even be responsible for water contamination by lead released. Agricultural areas also record conséquences of VOG, which attack plants and crops, and damage fences and infrastructure. 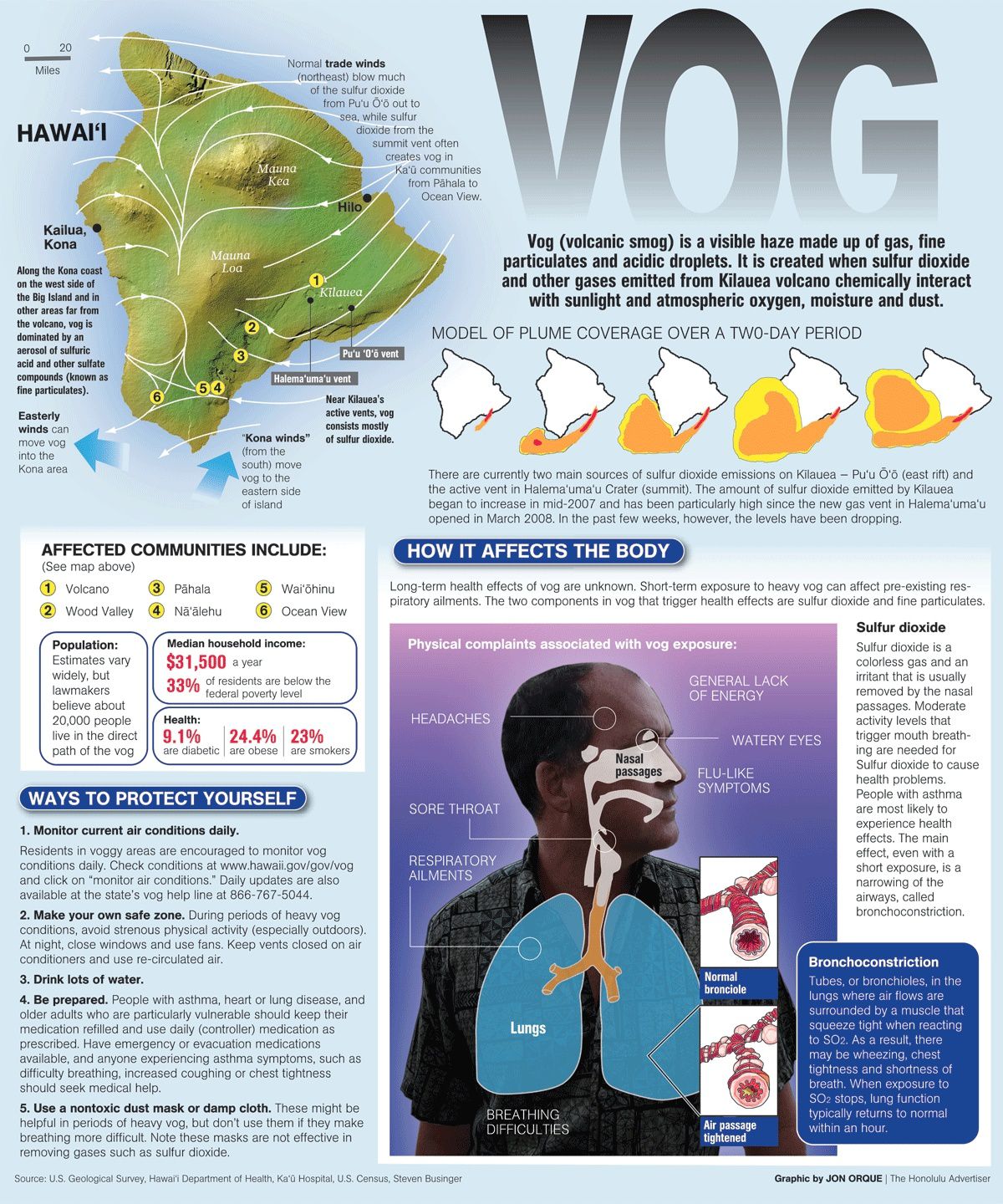 Informative displays of the USGS on the VOG - doc. Honoluluadvertiser