The 7th anniversary of the eruption longest Kilauea summit:
Signs of unusual activity began in 2007. In November, the tremor suggests magma movements and the end of December, sulfur dioxide emissions begin to rise. Deflation marks the summit of the volcano ... signs a bit contradictory, given the following events.

In early March 2008, tremor levels and SO22emissions are above normal, and on March 12, a high-temperature fumaroles area appears on the south wall of the crater of Kilauea Halema'uma'u and also night glow.

At 2:58 on March 19, 2008, a vent 35 meters wide opened, and an explosive eruption projected pieces of hot rock (old solidified magma) on the rims of the Halema'uma'u. A few days later, it's recent lava particles, young, and rich in gas that are ejected from the new pit crater called Overlook crater. The explosions and projections continue during the following months.

In September, a helicopter flight allow to distinguish a lava lake and spattering on the bottom of the crater Overlook ... first direct vision of molten lava at the summit of Kilauea from 1982. The lava will remain deep in the pit crater for a year and a half and is seen occasionally. Two major collapses mark the new crater in December 2008 and June 2009.

A permanent lava lake appears in mid-February 2010, together with inflation of the volcano summit. Apart drainage out of sight after the Kamoamoa eruption in March 2011 in the east rift zone, the lava lake continues until the end of March 2013. The circulation of lava is placid, rising north edge , cooling in black plates with zebra of incandescent cracks, before diving on the southern edge where a persistent spattering is found. 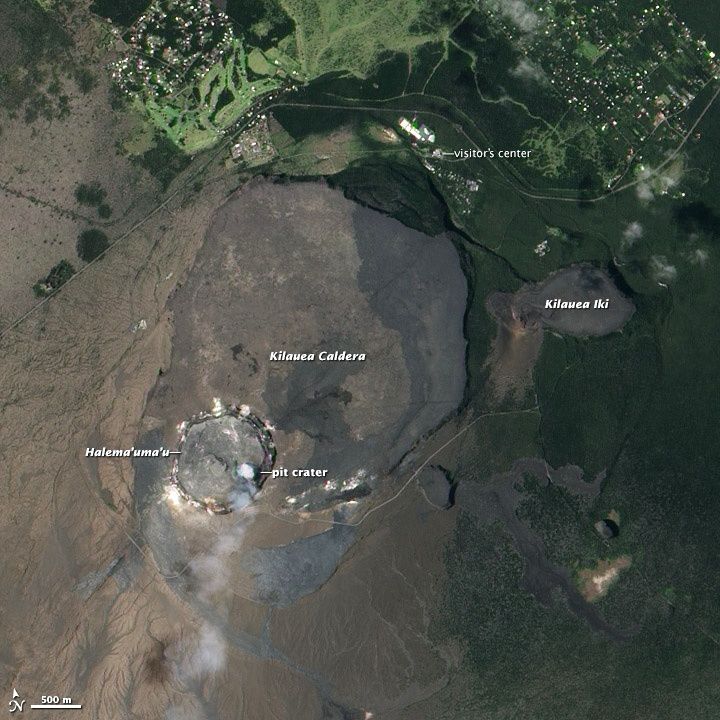 The summit of Kilauea Caldera and his nested craters Halema'uma'u and Overlook (pit crater), the 08/01/2013, by the NASA EO-1 satellite Ali / HVO

The fluctuations of the lava lake:

The level of the lava lake can fluctuate from hour to hour, and with a height difference of about twenty meters, following cycles of gas that rise, called "gas pistoning".

In addition, inflationary and deflationary cycles of the summit magma chamber can lower the level of the lava lake to 50 meters.

A third parameter is constituted by the pressure variations in the magma chamber.

Its lowest level is noted at 220 meters below the crater rim. In 2013, the average level was maintained between 20 and 50 meters below the rim of Crater Overlook.

April 23, 2015, the lake level has increased over the previous days, the level is 20 meters below the  Overlook crater rim ... the highest point measured from the ongoing eruption.

On 24 April, the level is only 14 meters below the edge, and different areas of spattering are active on its edges. Access is forbidden to the public because of the danger, and the surface of the lake is now visible from the Jaggar Viewpoint, always accessible. On April 25, its level rises again: it is between 10 and 7 meters below the edge.

On the morning of 26 April, the level is at its highest level: three meters below the rim of Crater Overlook.

Will it overflow and flood the floor of Halema'uma'u crater, as it had been covered with lava in the 1900s. It can be noted, however, that the level of the lava is lower than in the early 1900s, presumably because of the Pu'u O'o eruption, which also draws from the summit magma reservoir.