In Ecuador, an increase of emission tremor of Reventador volcano was observed on May 17, 2015 at 13h50 UTC / 8:50 loc., suggesting a lava flow, not directly visible because of cloud cover.
Thermal images of Reventador, located in the Copete sector, show the presence of a lava flow down its southern slopes.
On the image of 19.05, it forms a fan, ranging from SW to SE and is divided into three fronts, reaching a length of over 1,000 meters from the summit.
The ejecta related of the explosions are limited inside the caldera and do not threat to populated areas. In Colombia, the Nevado del Ruiz has been the site of ash emissions on 19 and 20 May 2015, visible on the webcam.
These programs follow a volcanic tremor episode began on May 13 to 3:08, associated with the first ash emissions, amounting to approximately 300 meters.
In late April, of such ash emissions were recorded by the Observatory of Manizales. 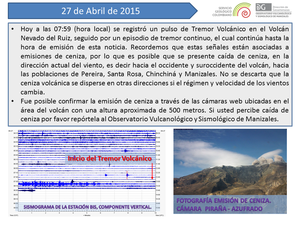 Nevado del Ruiz - Notice of ash emissions and tremor of April and May 2015 - Doc. SGC Manizales - one click to

An explosion marked the saddle between the Gunung Lokon and Gunung Empung, twin-volcanoes located on the Indonesian island of Sulawesi, on May 20, 2015 at 3:22 p.m. local. She was accompanied by an ash plume rising 1,500 meters above the presumed area of ​​Tompaluan crater, and a loud noise heard 5 km away.
The last eruption of Lokon-Empung date from Sept. 2012 to Sept. 2013 (GVP); three explosions were reported by the PVMBG on September 13, 2014, accompanied by white plumes rising 500 meters above the crater. This volcano is still on alert level 3 / Siaga since September 24, 2011, together with a closed area of ​​radius of 2.5 km.