The lava flow, located just over 3 km from the RN after descending the "Grandes Pentes", stopped at the flat area before the forest of Filaos. In an interview with Imazpress the volcanologist Philip Kowalski of OVPF reports that "the lava front has not moved for 48 hours. It leads me to believe that it will advance more. And if he does not advance while the lava continues to flow is that it thickens {...} Over a great part, the casting has solidified: in surface, it has cooled. - rocks were formed - but the lava flows still inside. Above the crust rises like a cake. But there is nothing visible or extraordinary to see. " The Observatory remains vigilant: "The magma can continue to push from below and another opening is possible," said Philippe Kowalski. Following the meeting of the departments concerned (Observatory, gendarmerie, NFB, national park, IRT and departmental and regional authorities) to the prefecture, it is not possible at this stage to reopen access to the Enclos, as the eruption is not stabilized, the march towards potential observation sites is difficult, and sulfur vapor are too risky for hikers, given the physical effort that walking requires.

The sulfur dioxide alert thresholds were exceeded in the night from Tuesday to Wednesday (more than 500μg / m³ / h for more than 3 hours at stations statements of Bourg Murat and Maïdo).

Last report by the OVPF 22.05 / 19h.
Since 30 hours, the tremor shows significant fluctuations with periods in which the level are multiplied by two. In the last 24 hours, 17 Volcano-tectonic earthquakes were identified and 3 collapses.
During the night between 21 and 22 May, observers report that large variations in activity were evident with particular on 3 am an increasing of the height of fountains (over 50 meters high), the collapse of part of the crater under construction, and the establishment of a new very fluid lava drain on the right bank of the main flow. Volcanic tremor is still registered since May 21 at Nevado del Ruiz. On the webcams, the ash plume is visible, rising to 350 meters, accompanied by ash fall on the west / northwest of the volcano, including Manizales. 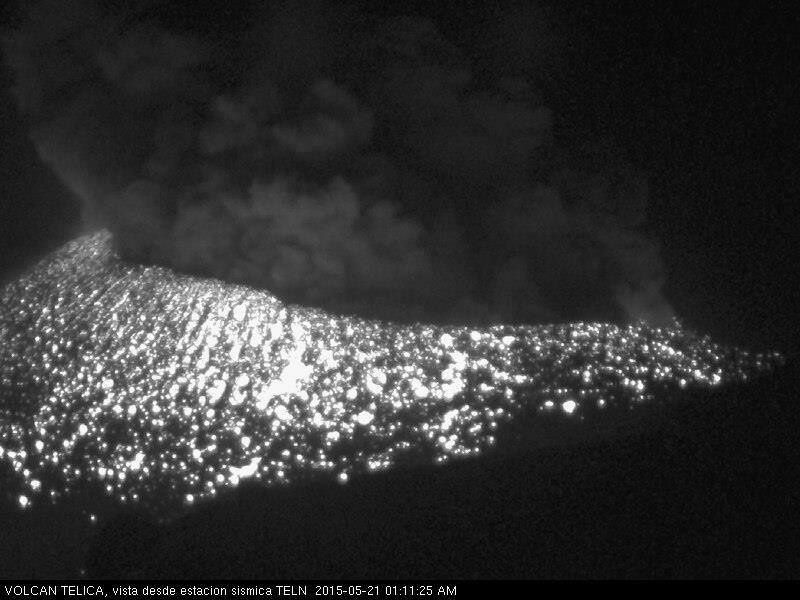 The Geospatial Information Authority of Japan speaks of inflation over 12 cm. between April 17 and May 15, based on an analysis of satellite data. / Via Japan Times 18.05.2015.

Inflation and fumerolian activity are linked to a risk of phreatic explosion, which has banned the active areas and raised the alert level to 2, on 6 May  ... To be continued.