The volcanic news are a little shaken at the moment with many eruptions and alerts. Among them, a brief overview, not exhaustive!

In Sicily, Etna resumed activity at the northeast crater with a small ash emission that on July 17 ... more to come ! The Raung, always active on the island of Java, no more disturbing the Airport of Denpasar / Bali ... the winds turned and the plume is moving from the 16 to the northwest, justifying the closure of airports in Surabaya and four other smaller, which Notohadinegoro, Blimbingsari and Abdurahman Saleh Airport on Malang.

According to the Jakarta Globe, Surabaya airport would open again on Friday. 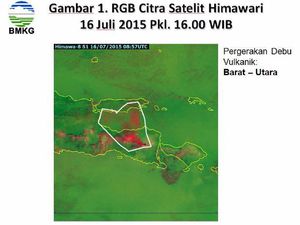 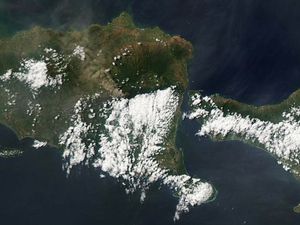 In Sinabung, new pyroclastic mark the southeast flank the 17 and 18 July. In Mexico, Popocatepetl issued an ash plume loaded this July 17 at 7:14.

Note that the decreasing of the activity of Colima has reduced the prohibited area from 12 to 8 km away, and allow the return of some families in their homes The Phivolcs reports a small ash eruption from Bulusan, registered as an eartquake explosive type  (??) for 11 minutes, July 17 1:10 p.m. to 1:21 p.m.. She was accompanied by a plume of gray ash amount only 200 meters high, before drifting towards the WNW. The volcano alert level remains at 1 / abnormal. Experts from the Volcanological Observatory INGEMMET / Peru climbed Sabancaya volcano, 5,960 meters high, on 9 and 10 July, to take and analyze the ash emitted by the volcano in recent weeks.

The ash is gray color and grains measuring less than 0.5 mm., revealing to observation the presence of plagioclase, biotite and amphibole (original silicate magmatic)

The presence in the ash of predominant juvenile fragments suggests that Sabancaya entered an new eruptive phase of magmatic origin, and may increase in intensity in the weeks or months.