The art on the way of fire - "Surtsey (Iceland 1964), virgin land, forbidden world", by Jocelyn Lardy.

In his series "The great volcanologists," our friend Jocelyn Lardy give us the scoop on his latest canvas ... As usual, he gives us the various stages of its completion, from the sketch to the finished work.

His inspiration comes, he tells us, from the first chapter "of water and fire ... the last wave" of the book of Guy De Saint Cyr, "From a volcano to another ... the adventures of a lava hunter ".

"I shared the canvas in a low third, two thirds up, very classic. In the bottom third, I want a somewhat turbulent sea, subject always exciting to paint. In the upper part, I want a very impressive volcanic cloud covering most of the top. My two main elements will be on each side, the boat and the island, in which I will insert a column of lava as described Guy de Saint Cyr. Then I will join the two elements with a scene where members of the trawler try to bring on board two people in a dinghy ... " 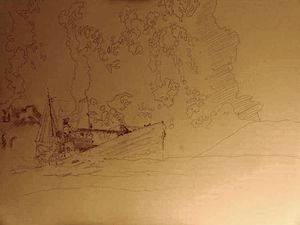 "Surtsey, virgin land, forbidden world": The work to his beginning in May 2015 - a click to enlarge - Photo © Jocelyn Lardy

His idea takes a few words from Guy: "... the trawler rears rises, sinks ... a huge cloud ... slowly rises above the crater ... with terrifying majesty. ..this is the first time a trawler is approaching also near the volcano .... a titanic fluid basalt vertical cylinder ... fuse to dizzying heights as a huge range of fire. " The viewer's eye goes, in a Dantesque atmosphere, from the boat buffeted in a rough seas to the volcano spewing his guts ... before seeing the little yellow boat and the drama that is being played.

Guy and Monique, his young wife, are on the verge of drowning, so they had to contemplate this volcanic eruption for two days. "... A rope is connected to the orange canoe, Monique can not swim, dramatic moments, I grab the rope ... Monique clinging to me, the dinghy, deforms (after puncture) ... we have water up to size ".

They were finally recovered just in time by the crew of the trawler. "Surtsey, virgin land, forbidden world" ... an entry in the canvas: "... a rope is connected to the orange canoe" - Photo © Jocelyn Lardy "Surtsey, virgin land, forbidden world" ... an entry in the canvas : "Monique clinging to me, the dinghy, deforms ... we have water up to the waist" .- Photo © Jocelyn Lardy

The impression of what happened to the couple Saint-Cyr traveled extensively, with various phases of the eruption, and acrobatic recovery of the  protagonists ... this canvas do not want to be a photo, it revives "an impossible epic" as the author says.

Written with four hands, by Jocelyn and Bernard.

The distribution of this canvas agrees with the news of the island of Surtsey:

Scientists measured a temperature rise of the soil of the island of 10 ° C compared to previous measurements made there are two or three years ago. They think Surtsey temperature began to rise after an earthquake occurred in the spring 2015. This temperature rise indicates that magma is moving in the volcanic system of Westman Islands ... of course too early to predict an eruption in thefollowing years.

At this time, there is nothing to suggest an eruption, volcanoes often warm in surface before cooling again. The biggest risk for the case of Surtsey would be the occurrence of a steam explosion ... incurred only by the birds and plants that live there in the summer. 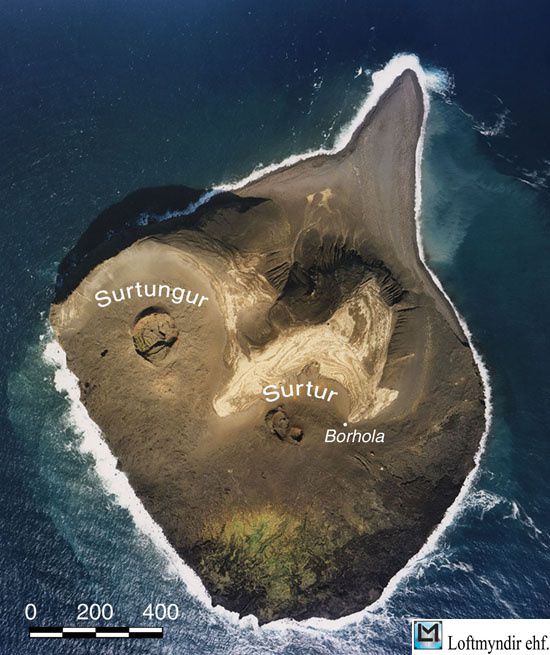 Aerial photo of Surtsey and craters in August 2002 - The Surtsey Research Society / http://www.surtsey.is/pp_ens/photo_map_3.htm