Roman exploitation of tuffs emitted by the eruption of Laacher See.

The eruption of the Laacher See volcano in the Eifel, 13,000 years ago, was one of the most powerful of the late Quaternary in central Europe.

"This is a classic example of a complex Plinian eruption type" according to Professor H.-U. Schmincke, "whose mechanism has radically changed during his brief evolution." The observation of the strata of the career of Wingertsberg allow to reconstruct the different phases of the eruption :
- The cleaning of the duct was made at the meeting of the magma and the aquifer
- Then a rising plume of ash and gas - of  Plinian type - was formed, amount to more than 30 km. altitude. Its collapse cause the deposits classified in LLST (Lower Laacher See Tephra) and a portion of the tuf ring present around the lake.
- Followed pyroclastic flows that are either pyroclastic flows, either breaking flows... according to the concentration in element : they form the layers MLST (Medium Laacher See Tephra) and ULST (Upper Laacher See Tephra). 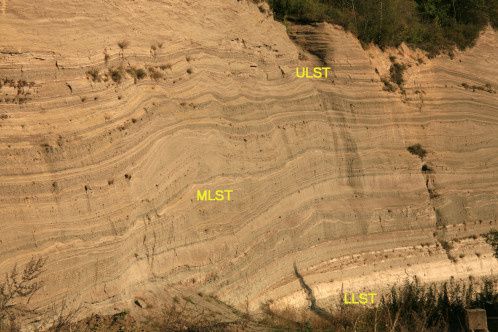 Laacher See Eruption -emision ratio in m³ / sec and height of the eruption column - according Volcanism of HU.Schmincke 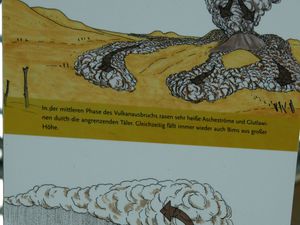 Römerbergwerk Meurin - photo left: above, the landscape formed by the eruptions which preceded that of the Laacher See - down, first phase of the eruption of Laacher See - - photo right: above, collapse of Plinian column - downstairs ash emissions at the end of eruption. - A clic to enlarge - photo of explanatory banners

The eruption called of the Laacher See has not only changed the area at the time, she also left an impressive amount of tuff and pumice.

These resources have been exploited since Roman times, here is some 2,000 years. The largest tuff mine north of the Alps, also known as Meurin career, is located Kretz: Das Römerbergwerk. 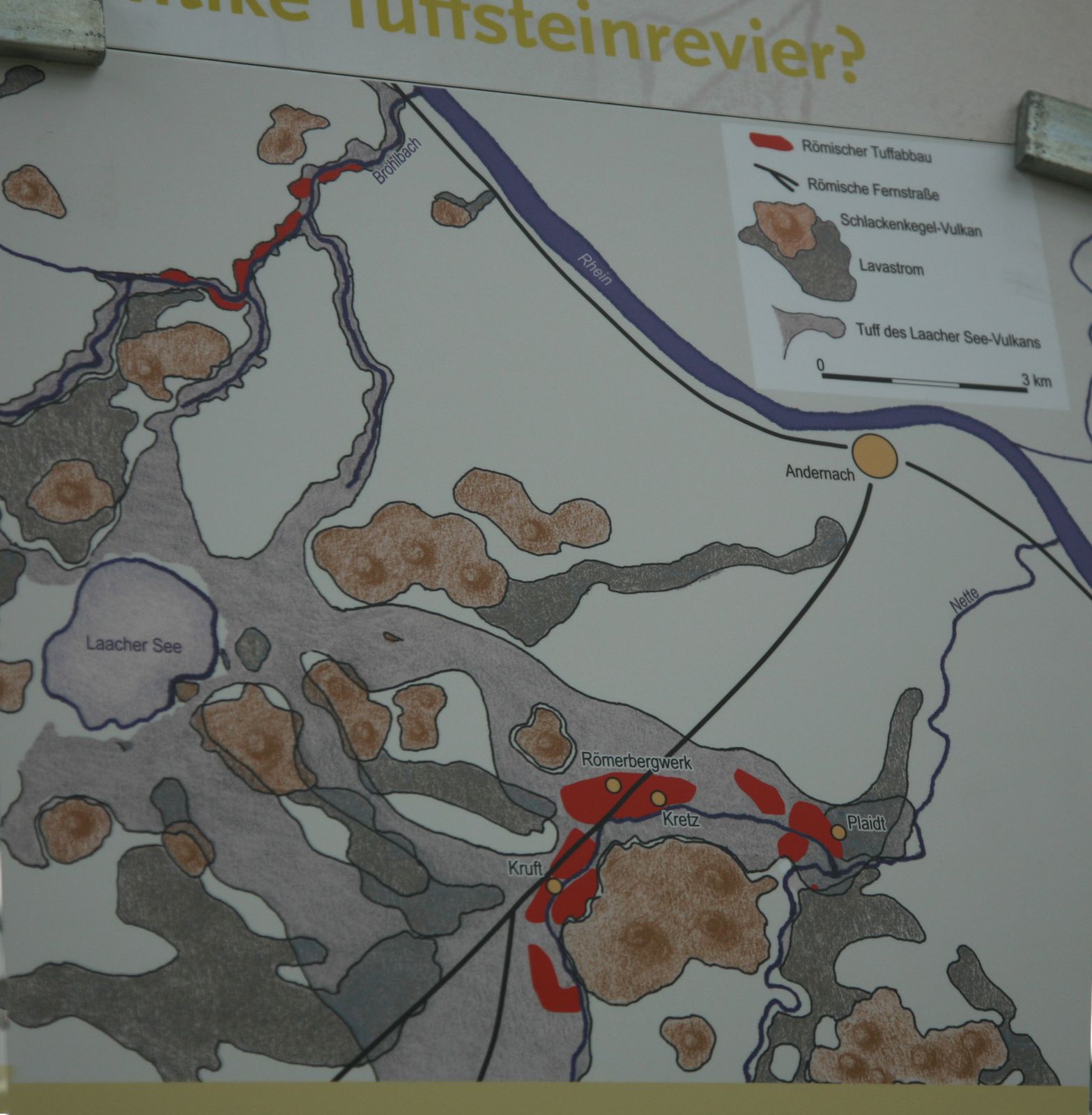 Location of Roman exploittions (in red areas) on the vast tuff areas issued by the Laacher See (light gray) - photo of an explanatory banner .

The tuff layer has a thickness of several meters. The Romans exploited it in dusty and dark underground tunnels.

Rooms have been dug, naturally supported by pillars left in place. Tuff blocks up to 2.5 meters high and 1.60 meters wide were hand cut on all four sides before being released using iron wedges. Pushed to a pit on logs, they came out with a crane.

The original operating area was two to three square kilometers; only a small portion, 45 meters of 55, was preserved in a futuristic museum, whose the steel cantilever dome protects from the elements. Corridors, stairs and wells explain the life in the mine in the past times ; ancient farming techniques and life of miners and Roman legionnaires are highlighted in a Archéosite. This material was used as building block for homes, for burial sites, sarcophagi, achieving fountains and altars.

He also became one of the Roman concrete constituents ; it was used in the area for the construction of the aqueduct carrying water over 95 km from the Eifel to Cologne / Colonia Claudia Ara Agrippinensum. It was built in 80 AD. 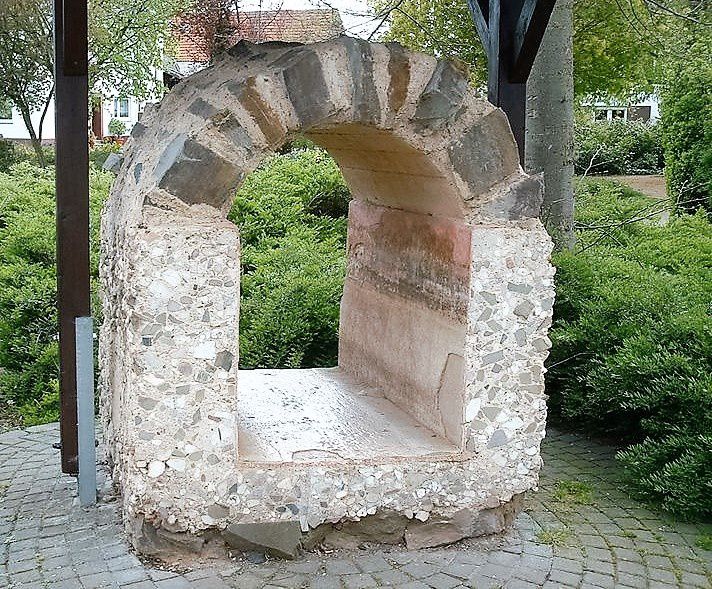 Roemerkanal Buschhoven - Eifel Aqueduct in Cologne: the Roman concrete is used for making the channel, the cover is made of cut stones - photo Matthias Abel

- Volcanism - chapter on the eruption of Laacher See - by H.-U. Schmincke - ed. Springer