"The eyes of the Eifel" - 5 - the Ulmenermaar & the Wallenborn brubbel. A little apart from the other maars, the Ulmener maar is the youngest maar of the volcanic area of ​​the Eifel.

Born about 2,000 years after the eruption of the Laacher See, her dating by dendrochronology makes up to 11,000 years old, while those by carbon-14 vary between 7.335 and 10.920 years. Volcanologists of the Smithsonian Institution see his activity between 8890 and 8590 BC.

This maar has an irregular shape, in pear shape, measuring 320 m. on 225. Its crater,60 meters deep, notch the underbody from Devonian. Professor H-U. Schmincke considered a wall 65 meters long, well exposed near the church.
There are eight units, differing in size and color, belonging to types of variables rocks.

In the lower part of the wall, he noticed over three meters high, three distinct layers, each measuring about one meter thick. Description panel of the wall of the Umener maar - a click to enlarge - Photo © Bernard Duyck 08. 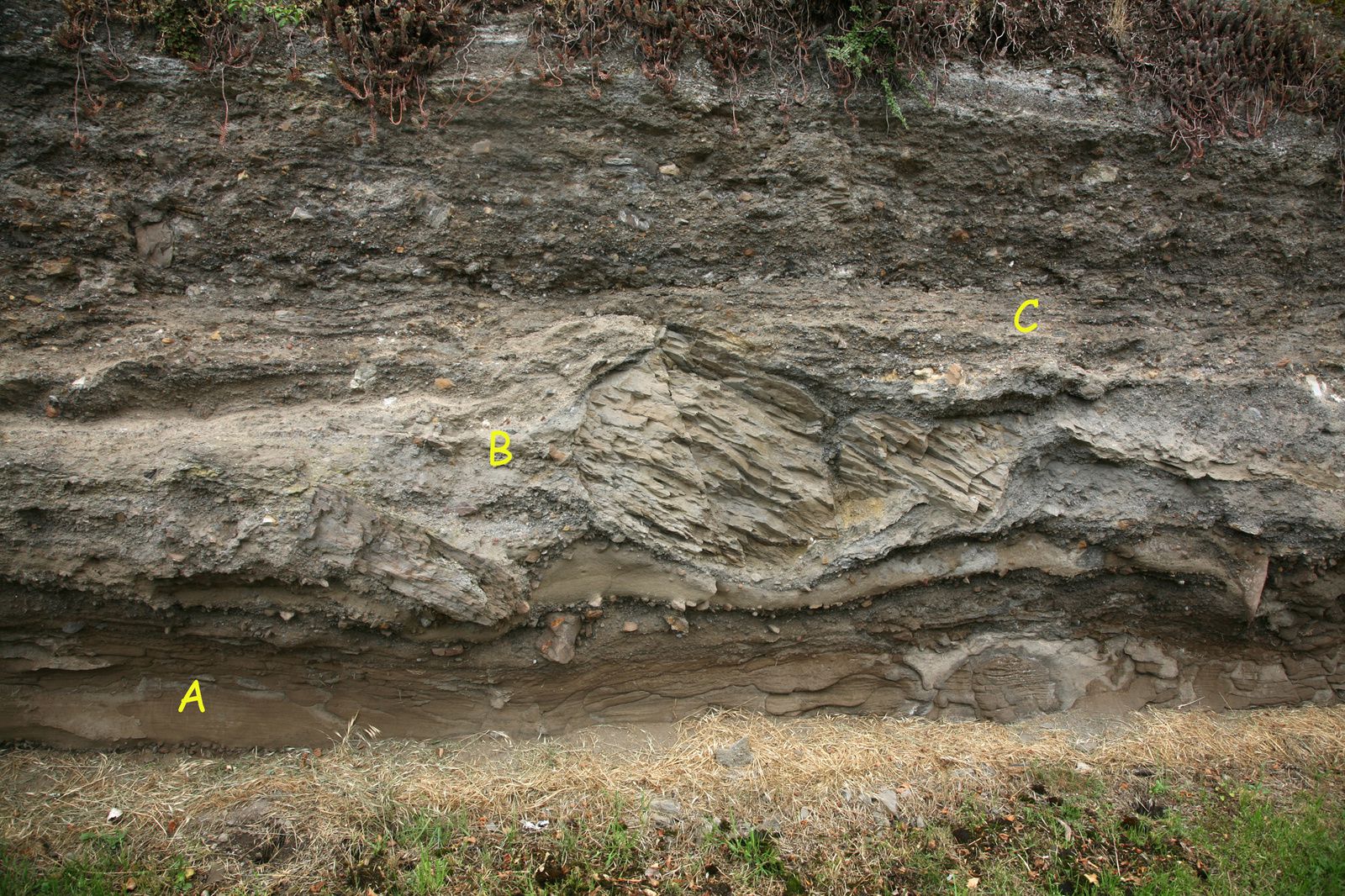 The lower layers of the wall of the Ulmener maar - Photo © Bernard Duyck 08.2015 The lowest layer (A on the didactic panel and on the photo) is characterized by a fine grain size of the thin layers, reflecting episodes of low energy of the eruption.

Layer B, surmounting, is rich in the base Devonian fragments, including a large block of about one meter in diameter, which impacted finer sediments, which hint at the direction of projection.

The C layer is slightly colored and contains many sandstone yellowish fragments that contrast with those of the layer B. The explosivity of the phreatomagmatic eruption is observed here by the absence of lava or deposits of hot spatters ... the tephra deposited have been cold and wet; they are much more chemically differentiated than in other maars of the Eifel and strongly cemented by carbonate.

Western Eifel can not be leave without mentioning "die Wallenborn brubbel"  ; this cold-water geyser is indirectly linked to the volcanism of Eifel . Following the intense activity, there 10-12000 years, large quantities of Carbon dioxide accumulated under the earth's surface. When the pressure is high enough, the water column gushes. With the emptying of the gas pocket, the phenomenon stops and the water flows back. 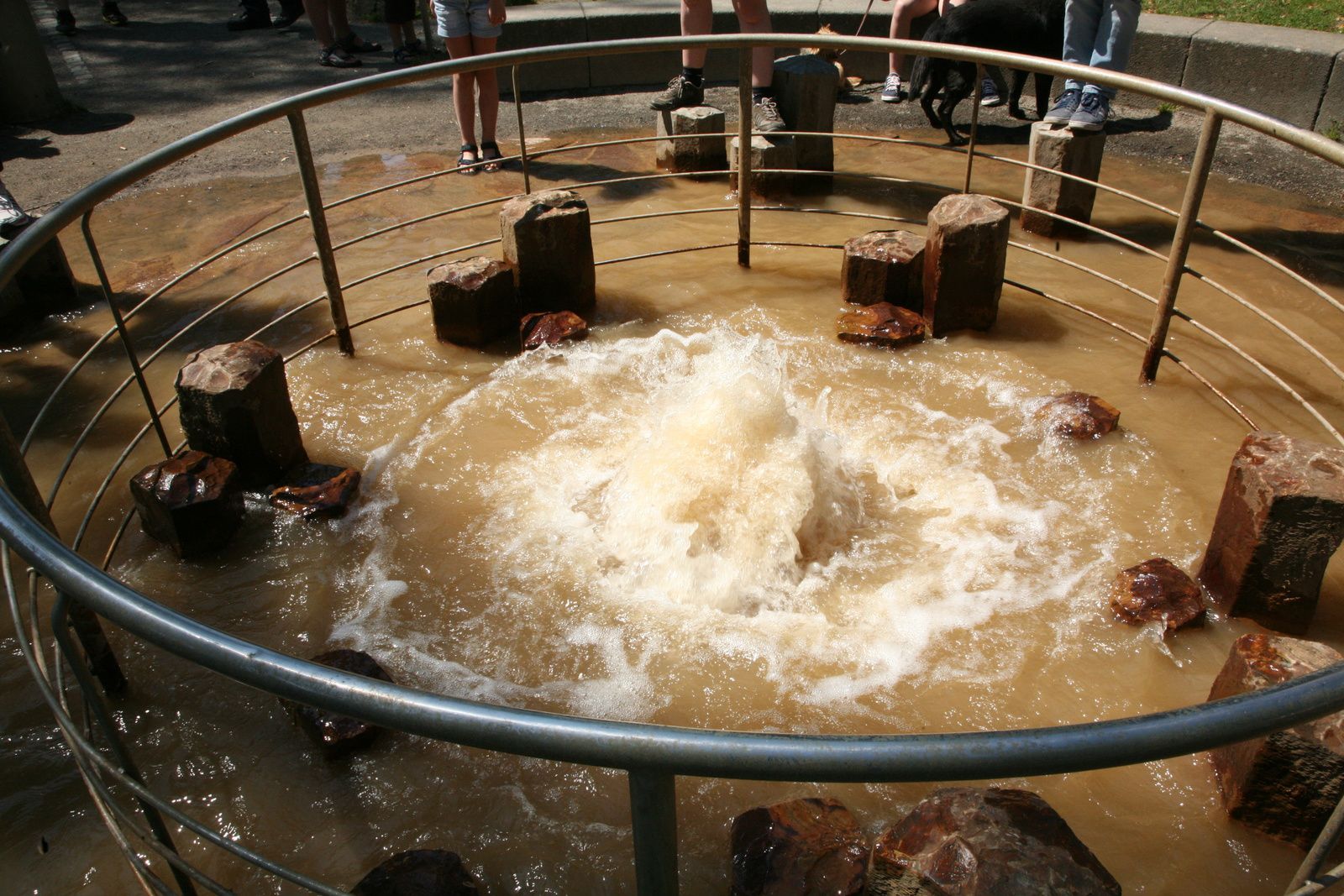 According to local chronicles, it is mentioned for the first time in the year 1225.
Until 1933, when the first drill, the place was only a source forming a small pond, fenced to prevent accidents related to carbon dioxide emissions.

The well was drilled to 38 m. depth ... for an industrial use of gas; it was quickly abandoned due to the aggressiveness of the mineral water and the rapid corrosion of pipes.
After World War II, there remained a piece of pipe; are regularly found dead birds, for trying to land a few moments there.

In 1975, a competition under "My village is beautiful", won by Wallenborn, allowed villagers helped by a local company to produce a structure making the site highlighted. The muddy pond was dredged, the bottom filled with gravel, an overflow was laid flowing towards the nearby stream and safety redesigned with the installation of a grid.

Since 1983, long-term agreements governing the source and environment.