The model proposed so far to explain the origin of volcanic hotspots was linked to that of hot rock rising plumes, rooted deep in the Earth's mantle.
A study by Scott W. French and Barbara Romanowicz, University of Berkeley, based on seismic imaging technique of the entire mantle, offering a new high-resolution map of the Earth's mantle, which shows not only the connections of most of the hot spots of the planet, but also reveals that at a depth of about 1000 km, the plumes are five times larger than what geologists thought, between 600 and 1000 km., and a temperature of 400 ° C higher than that of the surrounding rocks.
Communication between the lower mantle plumes and volcanic hot spots is not direct, because the top of the plumes unfolds as the delta of a river when they merge with the less viscous upper mantle rock.
According Romanowicz,"these columns are clearly separated in the lower mantle, and on their way to a depth nearby of 1,000 meters; then they begin to thin in the upper part of the mantle, they meander and deflect ... so that the tops of these plumes are associated with volcanic hot spots are not always underlying thereof vertically " The background map represents the relative Vs variations at 2,800 km in this model, with respect to the global average at that depth. We identify three categories of plumes. ‘Primary’ plumes are those for which δVs/Vs is lower than –1.5% for most of the depth interval 1,000–2,800 km. These 11 plumes also correspond to regions of the lower mantle where the average velocity reduction over the depth range 1,000–1,800 km is significant at the 2σ level (see, for example, Supplementary Figs 3 and 4). Clearly resolved plumes correspond to vertically continuous conduits with δVs/Vs greater than −0.5% in the depth range 1,000–2,800 km. Somewhat resolved plumes have vertically trending conduits with δVs/Vs greater than −0.5% for most of the depth range 1,000–2,800 km, albeit not as clearly continuous. Plumes are numbered as listed in Extended Data Table 1. Green dots represent the global hotspot distribution according to ref. 27. Note that none of the plumes detected falls within a region of faster-than-average velocity at the base of the mantle, and that long-wavelength structure in this model agrees with that of previous tomographic models (see, for example, Supplementary Fig. 10). - From Broad plumes rooted at the base of the Earth's mantle beneath major hotspots / Scott W. French & Barbara Romanowicz -

A new image shows that the basis of the plumes is anchored at the border of the mantle and the earth's core in two huge stains / drops of hot rocks, each 5,000 kilometers in diameter, seeming more dense than the surrounding rocks.

These two anchors, in opposite directions, one under Africa and one under the Pacific Ocean, formed a single set during 250 million years.
The study further notes that their size, five times larger than thought so far, suggests that a higher temperature is not solely responsible for the rise of plumes, but a chemical differentiaton compared to rocks if surrounding adds. Relative velocity perturbations compared to the world average at the depth of 410 km and position of volcanic islands in the Pacific - Doc Berkeley University - From Broad feathers rooted at the base of the Earth's mantle Beneath Major hotspots / Scott W. French & Barbara Romanow 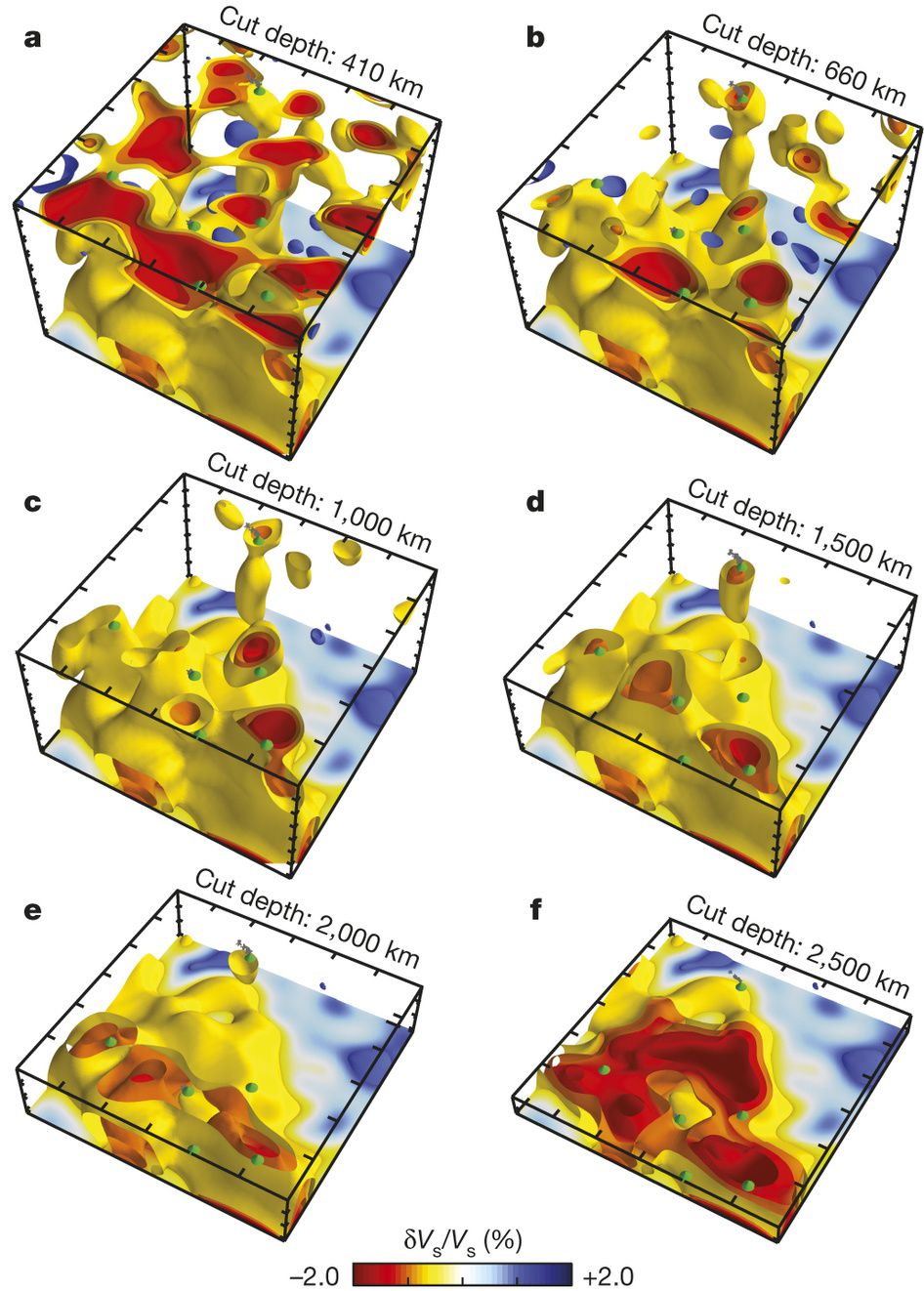 Relative velocity perturbations are shown with respect to the global average at each depth. For each panel, the location of the box is shown in the inset map ofFig. 1. The region is shown from above, with cuts at increasing depths: a, 410 km; b, 660 km; c, 1,000 km; d, 1,500 km; e, 2,000 km; f, 2,500 km. The following hotspot locations, projected down from the surface, are indicated by green cones in each box: Hawaii (top; north), Samoa (left; west), and the four Superswell hotspots: Tahiti, Pitcairn, Marquesas and MacDonald. Well defined vertically oriented conduits with central cores of velocity lower than −1.5% can be associated with each of the hotspots, particularly clearly in c and d. The low-velocity conduit beneath Hawaii stands out in b–d. In f, patches of much lower-than-average velocity start appearing within the Pacific LLSVP, continuing down to the CMB. On the other hand, at a depth of 410 km, the low-velocity conduits start spreading horizontally and merge into the depth range in which low-velocity fingers have previously been observed in the upper mantle21. From Broad plumes rooted at the base of the Earth's mantle beneath major hotspots / Scott W. French & Barbara Romanowicz

University of California, Berkeley, seismologists have produced for the first time a sharp, three-dimensional scan of Earth’s interior that conclusively connects plumes of hot rock rising through the mantle with surface hotspots that generate volcanic island chains like Hawaii, Samoa and Iceland.

More information on the sites "in Sources" ...

- Nature - Broad plumes rooted at the base of the Earth's mantle beneath major hotspots - By Scott W. French & Barbara Romanowicz