Piton de la Fournaise - fracture on the left of the picture and in the center, sliding of a portion of the sidewall allowing exhaust of lava - photo OVPF - IPGP 10/17/2015

On October 17, the OVPF reports that the sides of the active cone slide under their own weight and the pressure of the lava lake and its upheavals. Fractures on its western flank destabilize the walls, that in minutes slide under gravity, opening up a notch through which lava escapes in the form of flows.

On October 18, at 8:02, the tremor suddenly decreases to continue in sporadic flashes; air observations confirm that the lava has disappeared within the vent. This sudden changes, unexplained, will modify the pressure of the lava lake on the walls of the vulnerable spatter cone, which will collapse as can be seen to 8:19 on the webcam of Piton de Bert with a sucession of  brown color plume of ash.

We are waiting for clarification of the Observatory on the causes of the sudden disappearance of the lava lake, and a possible end of this very special eruption.

Great photos of Martel-François Asselin are visible on the Clicanoo Daily website by following the link: http://www.clicanoo.re/495555-photos-le-volcan-toujours-plus-beau.html 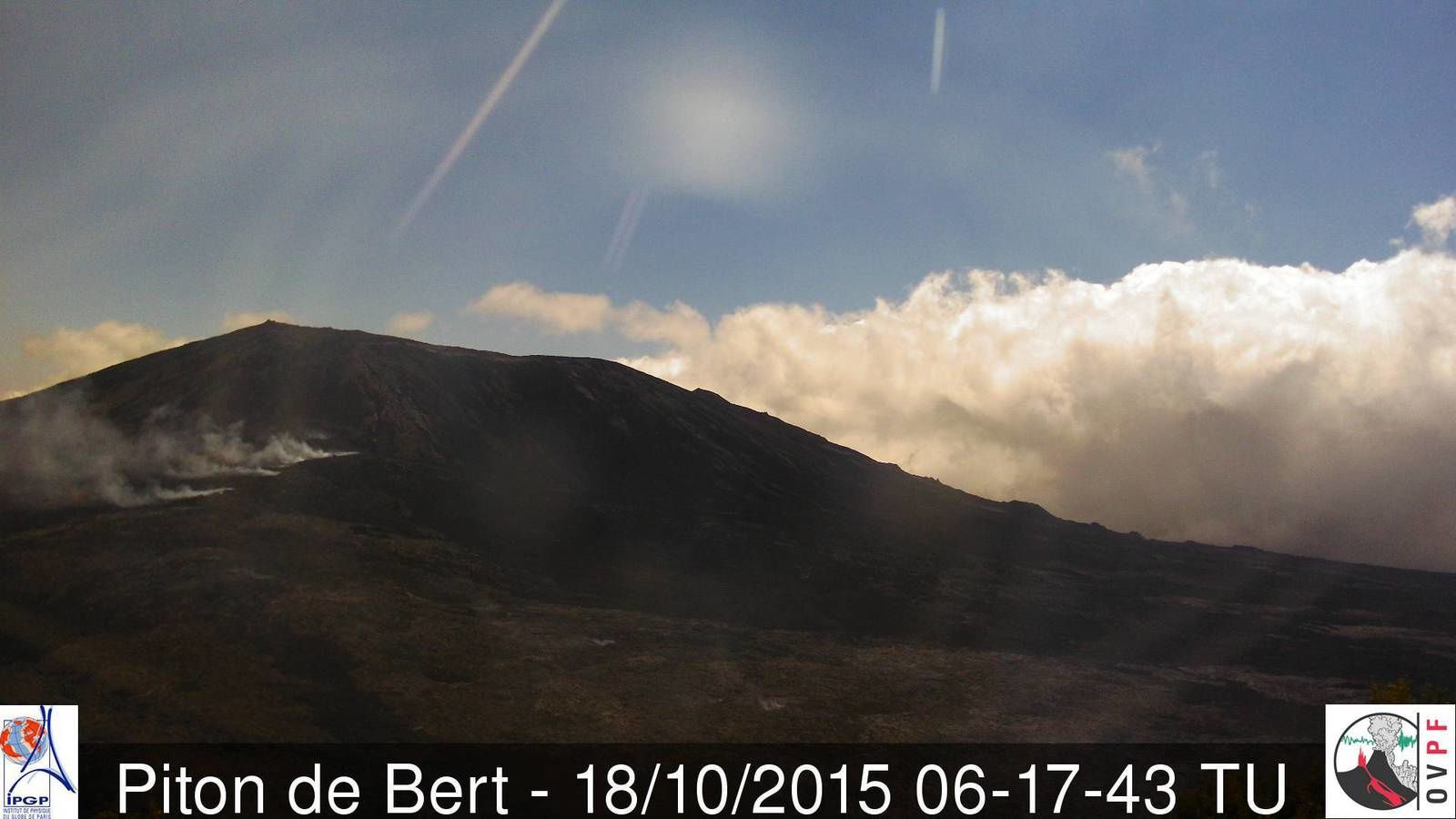 In Costa Rica, the activity marks the volcanoes Rincon de La Vieja, in the Guanacaste, and Turrialba in the Central Valley.

An overview of Rincon de La Vieja on October 17 in the morning by teams of Ovsicori revealed the presence at the top ash deposits following a recent phreatic eruption.

The main danger comes from possible landslides and flash floods ... the ash accumulated on the northern slope of the volcano and the rain caused several landslides and floods of the Pénjamo  river as well as damage to a bridge ; the approaches are not recommended. The National Park remains open, but the trail to the crater was closed to trekkers.
. At Turrialba, the intense rains of recent days have fed the water hydrothermal system, with subsequent production of steam emissions.

On October 16, seismographs recorded the tremor, and a small explosion at 5:49 p.m.; a very low frequency earthquake was associated with tremor during 270 seconds, and then a small explosion. The ashes have covered mostly the summit of the volcano, before dispersing to the northeast.

Saturday, October 17, the volcano deserved its name from Turrialba / "The White Tower" with an imposing white plume of steam and gas The Turrialba and his "white tower" of vapor in the day of October 17, 2015 - photo via Facebook

To Nishinoshima / Ogasawara Islands, the volcanic activity will continue without substantial changes.

The explosions follow one another at the pyroclastic cone every 3-5 minutes. The stack of lava flows made to raise the lava field and disappear any trace of an existing hornito. Discoloration of the water is still visible  within 4 km., Together with a notice of danger for coastal navigation. For your eyes only : "The auroral volcano "

a photo taken "at the time T" of an aurora over an Irish volcano.
The Slemish Mountain, historically Slieve Mish called, is actually a volcanic plug of an extinct volcano.

The Slemish Mountain is, according to legend, the first place of residence of Saint Patrick in Ireland. After his capture, there was brought as a slave and has resided there for 16-22 years, working as a shepherd on the Mount. He escaped before becoming a priest and to go back to try to convert his former master, and establish churches in Northern Ireland.