Evolution of the eruption at Piton de la Fournaise. The OVPF has posted its latest report:

"Since September 24, 2015, the seismicity moves upward. This trend is still present as shown in Figure 1 on the Station Rivals / below (10% increase). Note a slight drop early in the day (we'll look if it confirms what WE). The trend of increase is not as significant on Bory and Dolomieu South or even on other network stations.
The trend of low deflation observed since September 27 was confirmed both in summit area, at the base and at a greater distance. This trend is still quite sensitive. Here we measure the variation of distance (called baseline) between apical GNSS stations, stations at the base of the central cone and stations at a greater distance (sometimes outside the Yard). Deflation measured on the last 10 days is lower than 5 mm. RSAM (seismic intensity) recorded by the Station Rivals since the beginning of the eruption. 1-5 compartments are described in the bulletin of 24 September 2015. The red line is the date of the last full snow report issued by the OVPF. The compartment 6 is the increasing trend observed since September 24 that continues actuellement.- Doc. OVPF / IPGP

The gas flow measurements were possible with the return of warm weather (the weather limiting optical measurements).
After a period during which we recorded significant flows of CO2 in soil values ​​have decreased significantly since October 4th.
Flows remain constant SO2 in the plume and at the top.
We note a significant increase in water vapor at the top of the volcano.
Since the return of good weather we observed a peak flow of lava equal to 11 m³ / s on Oct. 4, then a return in the range of 5 to 10 m³ / s as before.

In summary, geophysical and geochemical indicators remain at a high level with a slight downward trend for those who are related to a pressurization of the building. The assumption made following this and a half months of eruption is that deep fluids (gas and magma) arrive in the upper part of the building and the surface (at least for the gas certainty) as flashes (cycles in the gas flow and in the strains). On the eruptive site:
Taking advantage of the return of fine weather we could observe the eruption from the eruption website every day of the week from Tuesday, October 6.
The cone is still imposing. Our estimates of height (about 30-35 meters) have been confirmed by measurements made by topography (daily 06.10.2015).
The morphology of the lava lake has evolved again. While in previous observations, a perfectly circular lake upstream and downstream a small mouth were visible, both wells are one with a general geometry of calbasse.
Wednesday, October 7th in the evening the cone is partially égueulé creating a breach 5 to 7 meters high in its upper part. A casting is in escaped.
The gas reaches the surface of the lake in the form of large bubbles which propel lava packages above and on the edges of the cone. It is these bubbles which release the gas plume of SO2 always rich but less rich in water vapor (white plume least). Piton de la Fournaise - Evolution of the vent from the beginning of the eruption. - Doc. OVPF / IPGP 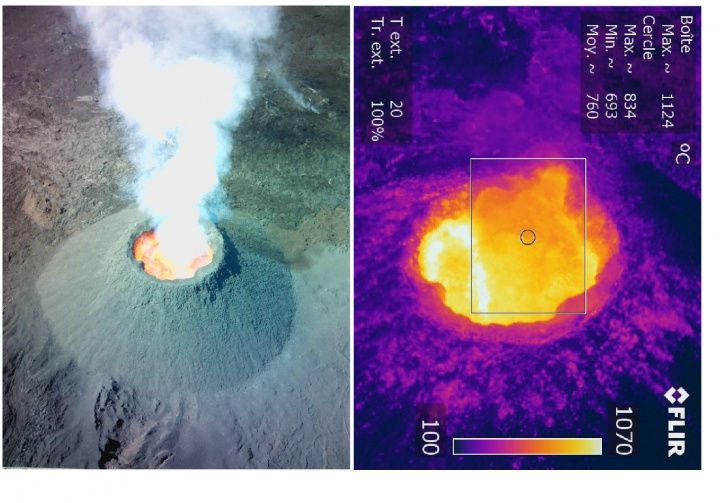 The flows are mainly composed of smooth lava (pahoehoe) issued by ephemeral vents present on the area of ​​lava field cooled surface (tunnels). What is notable is that a very large part of the lava field is covered by these type pahoehoe flows, from the foot of the vent until more than two and a half kilometers downstream, burning the vegetation at the foot Piton Bert.

Furthermore, the location of numerous ephemeral vents the accumulation of lava has formed morphologies of hormitos. " (Report OVPF / 09.10.32015)