Views on the hills of Tasikmalaya and Galunggung - photo Rossche 2011

Located southeast of Bandung, in West Java, the stratovolcano Galunggung has its central part occupied by a caldera in horseshoe open towards the southeast; it was formed 4,200 years ago, during an eruption that decapitated the cone and formed "the ten thousand hills Tasikmalaya", countless mounds of 10-80 m. height resulting from a debris avalanche in hummocks. Map of Galunggung crater with the lava dome Gunung Jadi, the edge of the Walirang and the drainages - According Katili and Sudradjat 1984 / GVP 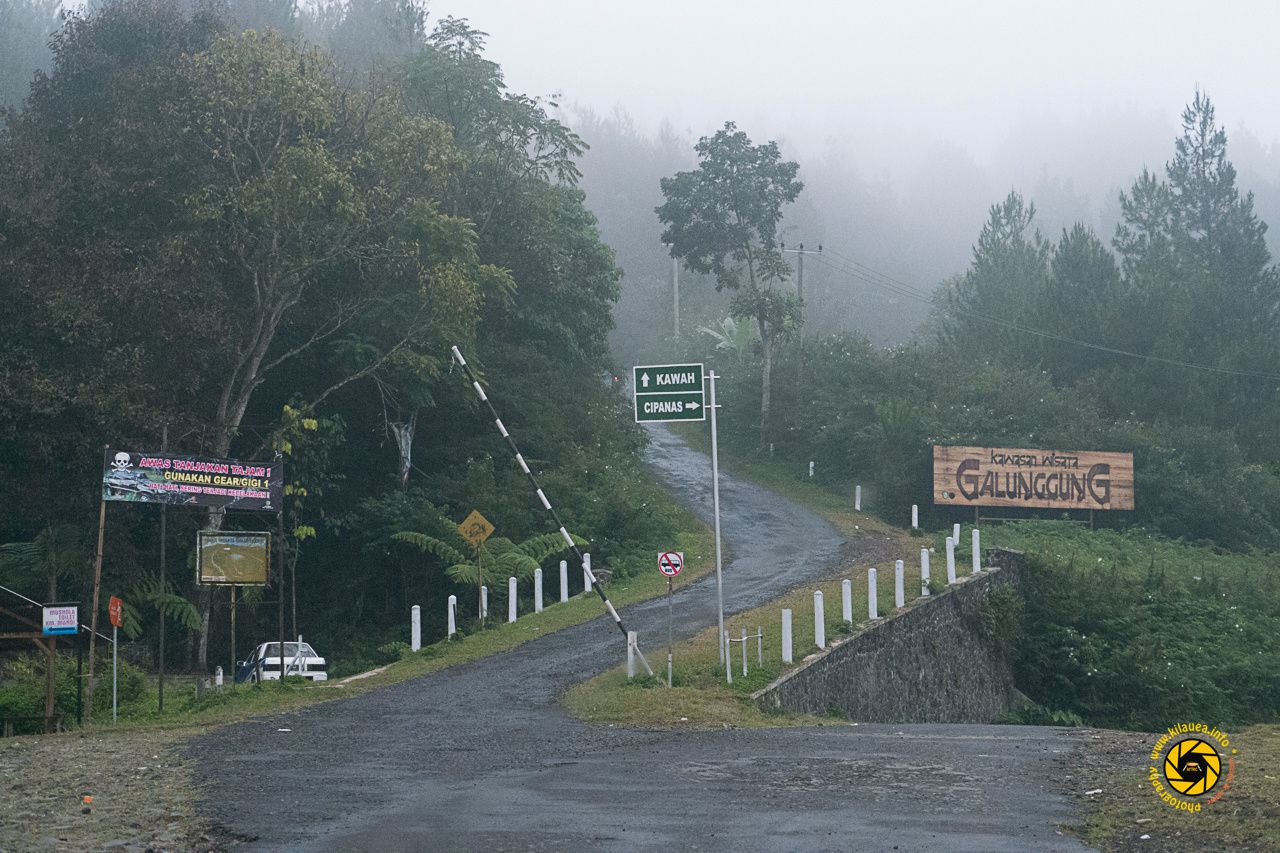 Access to Galunggung is by a suitable route, then by an endless staircase - Photo © 2015 Jean-Michel Mestdagh

Among the historical eruptions that marked the volcano, it falls especially those of 1822 and 1982-83.

The eruption of 1822 was relatively short, but was the cause of pyroclastic flows and lahars that killed 4,000 people. This was followed by the extrusion of an andesitic lava dome in the lake: the Gunung Jadi. He quickly reach 500 m. in diameter and 85 m. height.

The dome of Gunung Jadi was sprayed in the last eruptive crisis of 1982-83.

As of April 8, stronger explosions, vulcanian type, are accompanied by pyroclastic flows and hot mud flow, through the gap formed by prehistoric eruptions. From May to October 82: strong phreatomagmatic explosions were accompanied by ash plumes and gas from 10 to 20 km. height. At the end of this phase, the circular crater Walirang appears at the top; it is considered today as a maar (800 m. in diameter and 150 m. deep)

The explosions of June 24 brought down to 8-18 cm of ash and lapilli on villages located 7-10 km from the volcano and destroyed hundreds of homes. Here is the account given by Maurice Krafft in his book "Volcanoes of the World" ed. The Odyssey - Flammarion 1987

" A Boeing 747 of British Airways on a flight Kuala Lumpur - Australia and its passengers, witness a strange phenomenon, passing 12,300 m altitude south of Java: the reactors, the inside of cockpit and instruments are invaded by hundreds of Saint Elmo's fire due to electric shocks. The reactors are so bright that they seem lit by headlights (...) Suddenly the co-pilot reported that a reactor just fail! A few minutes later, it was the turn of the other three to stop. " - Computer image by Anynobody / Wikipedia

Without the thrust provided by the engines, the Boeing 747-200 plane relatively well: for one kilometer lost in altitude, the plane will have traveled 15 kilometers horizontally. The crew quickly determined that the altitude where the aircraft was located (37,000 feet, or about 11 000 meters), it could hover for 23 minutes and travel 169 kilometers.

" A very fine dust and sulfur smell penetrate the interior of the aircraft. The roar of engines fell , replaced by an impressive silence punctuated by the crackle of the fuselage and wings. The pressurization in the cabin no longer maintained by the motors, oxygen masks escape from their cache above the seats. (...) The disaster seems imminent, yet the majority of the passengers apparently remains calm. (...) After 13 minutes of waiting and fall, finally a reactor restarts  , followed shortly after the other three! But the plane is just one altitude of 3,900 meters and a barrier of high mountains separates the plane from Jakarta (. ..) Cautiously, the pilot zigzags between the mountains and then slowly goes down. He was surprised not to see any lights on the ground. In fact, the cockpit windows become opaque. Without any visibility, unbalanced device by the operation of three reactors at four, the pilot managed the very tricky landing. The disaster was narrowly averted! "

The engines were then peeled and the phenomenon, unexplained at first, been finally realized. The problem is initially linked to the ingestion and accumulation of volcanic dust. In addition to their abrasive action in a second time, these dust melts at the heat of engine (1000 °), and adhere to the turbine blades. The reactor suffocates and stops!

Similar explosions take place on 25 June, and between 13 and 15 July ; Note that on July 13, a plane from Singapore Airlines enters the ash cloud at about 9,000 meters, and loses three of its engines; the pilots can restart the engines in losing altitude and land safely at Jakarta. Galunggung - pyroclastic flow of 7 August 1982 which passes the crater rim and goes to a measuring station - the photo was taken by Butik Pasir Bentag 2 km from the crater / via Jack Lockwood, 1982 (US Geological Survey).

On June 27, the number of evacuees reached 40,000. There were 27 deaths, of which only 3 are caused by pyroclastic materials.

On July 13, eruptions resumed, culminating on the 16th, with the destruction of houses and shelters. Cikasasah and its surroundings are covered with a thick gray coat of fine powder; ash soften the forms; rice fields and ponds have smooth terraces, now sterile. Their irrigation system is disturbed by the accumulation of dust ejected for months. To Parentas, located twenty kilometers from the volcano, the ash accumulation threatens to collapse the roofs ... the villagers and remove the pile in front of their house, but this mineral snow don't melt and the roads in the village quickly become impassable, and the rainy season approaching, these deposits will re-engage and create waves of mud or lahars... Everywhere is desolation. Rice fields of Pasir Haur within 2 km of the crater, buried under the ashes of Galunggung - Doc. Maurice Kraffy / from her book Volcanoes and Eruptions. Explosive activity continues intermittently until January 1983. In the crater formed, a tephra cone, of 200 m in diameter and 70-80 m. high, occupies the site of 1918. Its vent with a diameter of 20-30 meters is animated by a strombolian activity. The eruption of VEI 4 is considered complete by the GVP 8 January 1983, with the extrusion of a small lava flow.

The change of eruptive type was accompanied by a change in the composition of the magma that rose from andesite to basalt. In nine months, the Galunggung is spitting 400 million cubic meters of ash. One hundred thousand hectares of land were devastated and teh damage is estimated at $ 100 million. Galunggung 02.05.1983 ... one month after the end of the eruption, clouds of steam escaping from the cinder cone formed at the center of the crater and the inner edges of the caldera; lake begins to form which will engulf almost the entire cone - photo Don Peterson USGS. 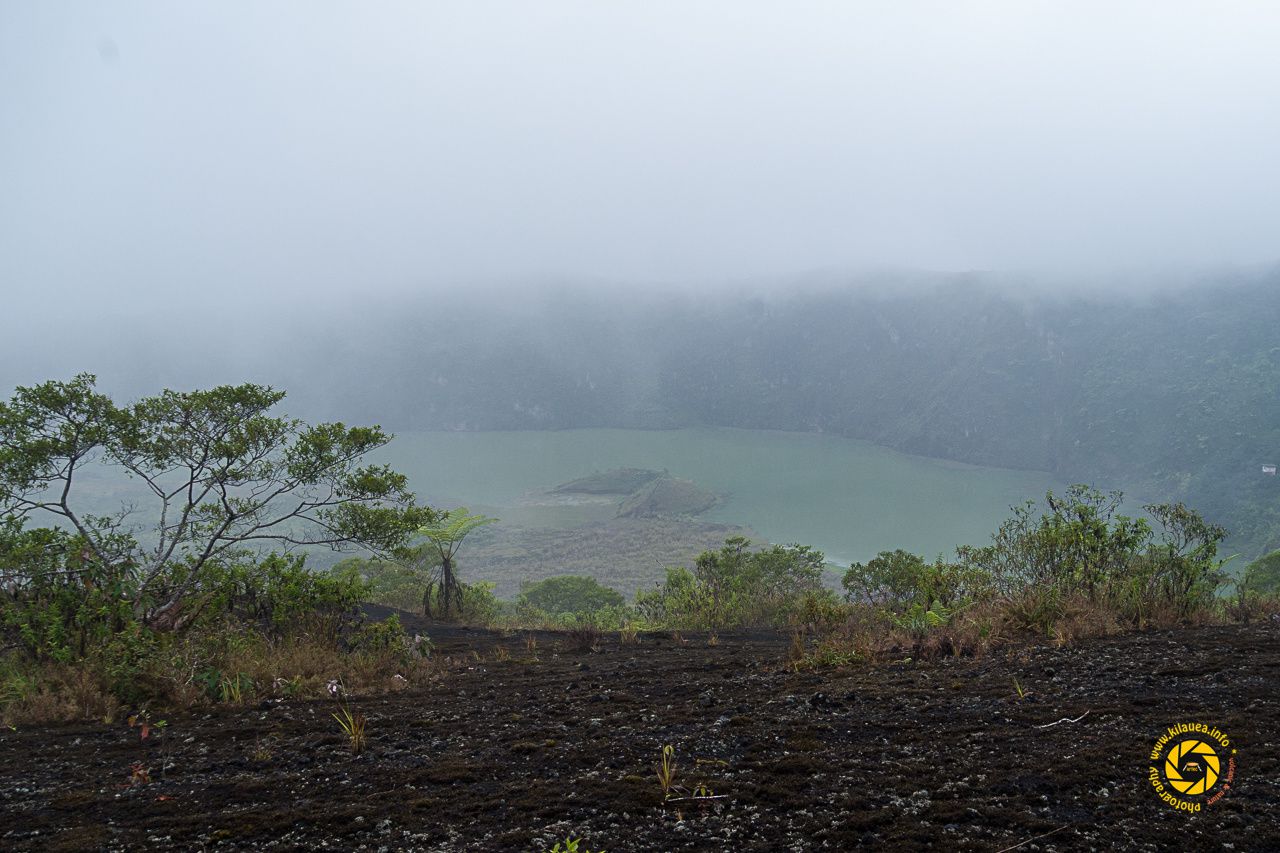