In Nebraska, a Pompeii of prehistoric mammals related to the Bruneau-Jarbidge eruptive center. The discovery and excavation:

Hundreds of skeletons of extinct mammals before human settlement were discovered in 1971 under agricultural land in northeastern Nebraska. The first indication of their presence is the discovery of the skull of a small rhinoceros, cleared by erosion in a wall of a ravine bordering a field of grain belonging to Melvin Colson.

Unlike other fossil deposits consisting of scattered bones accumulation, this fossil beds contain the bones connected to each other in a natural order. The deposits began to be excavated in 1977-1979, after a study of the local geology to explain this disposition.

The skeletons were deposited in a layer of volcanic ash with at the top of the bed, rhinos, deeper equine and camels, and finally birds and turtles. The smaller creatures died first, larger animals last. The larger animals died slowly over several days or weeks ... victims of inhaling large amounts of volcanic ash. All animals show symptoms of a disease known as pulmonary hypertrophic osteodystrophy ... characterized by bony growths caused by lung failure due to oxygen deprivation.
Since 1991, the site is protected as Ashfall Fossil Beds Historical Park, including a visitor center and facilities for the protection and study of these fossils. Its status has evolved into National Natural Landmark in May 2006. Ashfall Fossil Beds - a rhinoceros (teleoceras major) and her baby found near each other - Doc. Postcard Jar

Ashfall Fossil Beds - Tridactyle horses, such as Western cormohipparion, were adapted to the forest environment before 12 Ma; they then sold the horses not to monodactyles - Doc. Roger Hubbard / Smithsonian

All the skeletons are buried in a layer consisting only of volcanic ash, consisting of fine shards from broken glass bubbles,  from a powerful volcanic eruption. These ash particles are fine enough to have been able to penetrate deep into the respiratory system of animals, here 12 million years.

At that time, the magma plume beneath the earth's crust, known as a hotspot, pierced the surface of the North American continent, in the place of the current state of Idaho. The eruptive center is called Bruneau-Jarbidge, named after rivers carving the landscape. Active during the Miocene and Pliocene, the shield volcanoes have produced, between 10 and 12 Ma, basalt and rhyolite lava flows. The volcanic dust from these eruptions has moved from Idaho to Nebraska, located further east at 1000-1400 km, where it left a layer of more than 2 meters thick..

This hot spot, fixed, saw the North American tectonic plate move at its vertical in direction east-west  ... it is currently located under the Yellowstone, which left him his name. 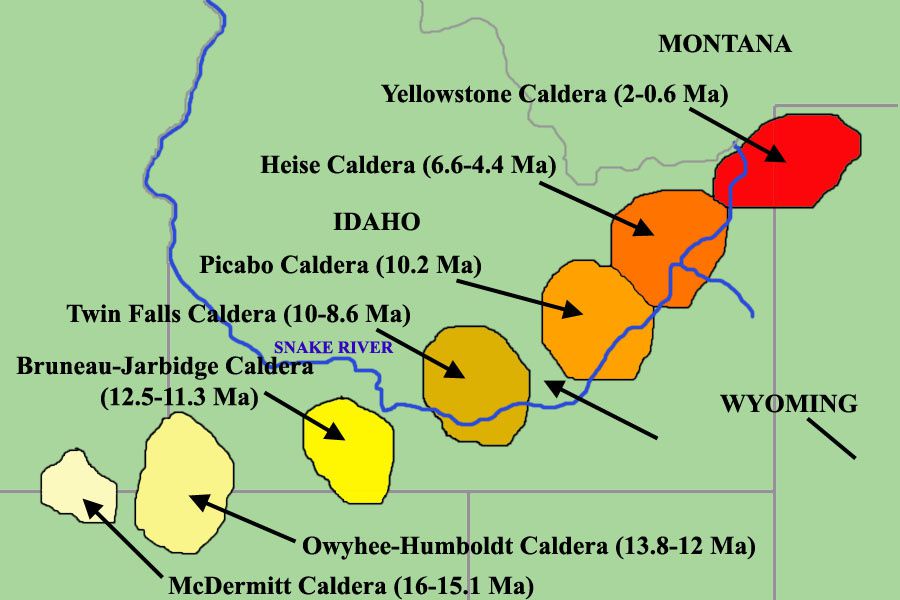 These findings illustrate and advance the history of volcanology and the evolution of species.