The cap of Myrdalsjökull, overriding the Katla volcano - photo Chris 73

FutureVolc conducted late January a simulation exercise of an eruption at Katla.

Students of  Iceland University  have developed new samplers of ash; Procedures for sending supervisory teams in the field and the implementation of these new facilities have been successfully tested. 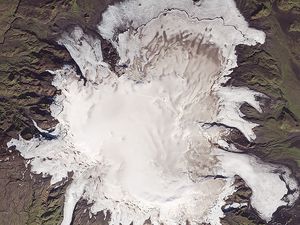 Left, the Myrdalsjökull, seen by the satellite Landsat-8 OLI - right, the location of the caldera of Katla and depressions therein are formed with dates. - A click to enlarge.

FuturVolc partners have been able to evaluate in real-time the monitoring data of seismometers, GPS and radar stations, the acquisition of satellite data and execution models to determine various information in a clear framework and under control of a scientific council.
The preset scenario was a small glacial flood and steam explosion on Day 1, with an increase of seismicity in the afternoon. The 2nd day, the activity was supposed to culminate in an explosive eruption of VEI 4, generating a plume amount to 10,000 meters, away towards the NE downwind. The 3rd day, the intensity was decreasing in the morning. Maps of tephra deposits on the floor through the use of the VOL-CALPUFF code and ECMWF weather data. The results show a ground load in kg / m² after two days of simulation - Doc. FuturVolc

Katla lies under the ice cap of Myrdalsjökull, in places under 700 meters of ice. It last eruption date from 1918, and was accompanied by huge glacial lake outburst (jökulhlaup)... and its activity is a multifactorial threat to the population, local and visitors increasing.

- FUTUREVOLC conducts exercise for an eruption of Katla volcano - link A scientific study, conducted in collaboration between ISOR / Iceland Geosurvey, INVOLCAN / Volcanological Institute of the Canaries and the ITER / Instituto Tecnológico y de Energías Renovables, on the Reykjanes geothermal field in Iceland has been published in the journal Renewable Energy.
One of the conclusions of this study shows that the analysis and evaluation of the spatial distribution of gas concentrations in the atmosphere of the earth as helium (He) and carbon dioxide (CO2), the carbon dioxide diffusion flux and soil temperatures recorded in the surficial environment of geothermal systems can provide very important information for project developers for the development of geothermal energy in the definition of the most boring places appropriate for the operation. Another aspect of this research may be useful for monitoring of geothermal systems, by providing a quantitative assessment of the extent of the changes of the degassing process of volcano-geothermal systems in surface environment, as a consequence of variations in the production of this geothermal field or a natural activity related to volcanic activity.

The study also investigate the potential use of CO2 / He ratio in soil gas for sequestration of CO2 in the calcite of the bedrock.