The ups and downs of a lava lake : Erta Ale 2 Media coverage has improved in the 21st century, due to the fact that in 2001 the war with neighboring Eritrea ended, and although the region is not fully pacified, visits will be more regular, both by scientists that the agencies who consign. Major changes are noted in December 2002: The talus cones, located on the old platform, disappeared, swallowed by the rising lava ; levels then declined constituting a new terrace at about fifty meters below the rim of the South East well. Fumerolian intense activity marks the caldera. (C.Weber & al) Erta Ale - to the left : A sketch map of the active crater at Erta Ale on 2 December 2002. The elliptical crater was WE 160 m (X) and NS 130 m. The lava lake (taking part 50% of the crater) from WE was approximately 100 m. Our descents (dotted line) were made at point (D) in the north. Lava fountaining up to 20 m high occured in different areas at the crater lake, but mainly in the west, south and center. - to the right : A sketch map of a cross-section of the active crater at Erta Ale on 2 December 2002 from east (E) to west (W). The altitude from the crater rim at the east (E) down to the terrace (T) was 45 m. In the north at our descent (D), indicated with the dotted line, about 40 m down to the terrace. In the west part the altitude from the crater rim (W) to the lava lake was 80 m in total (Y). Courtesy of C. Weber. - A clic to enlarge.

In November 2003, the bottom of the south pit crater is 90 meters deep, where a small cone of high ten meters include a lava pond 30 meters in diameter.

A survey at low altitude by a helicopter, on February 21, 2004, indicated no active lava lake ... only three hornitos are glowing. In November 2004, the level of solidified lake has risen and it is just 15 meters below the lip of the south west pit, where four hornitos are present. In the north pit crater, six hornitos spewing lava shreds.

On 8 October 2005, a lava lake at a depth of about twenty meters and agitated by violent discharges, occupies the entire surface of the south pit crater (G. St-Cyr) 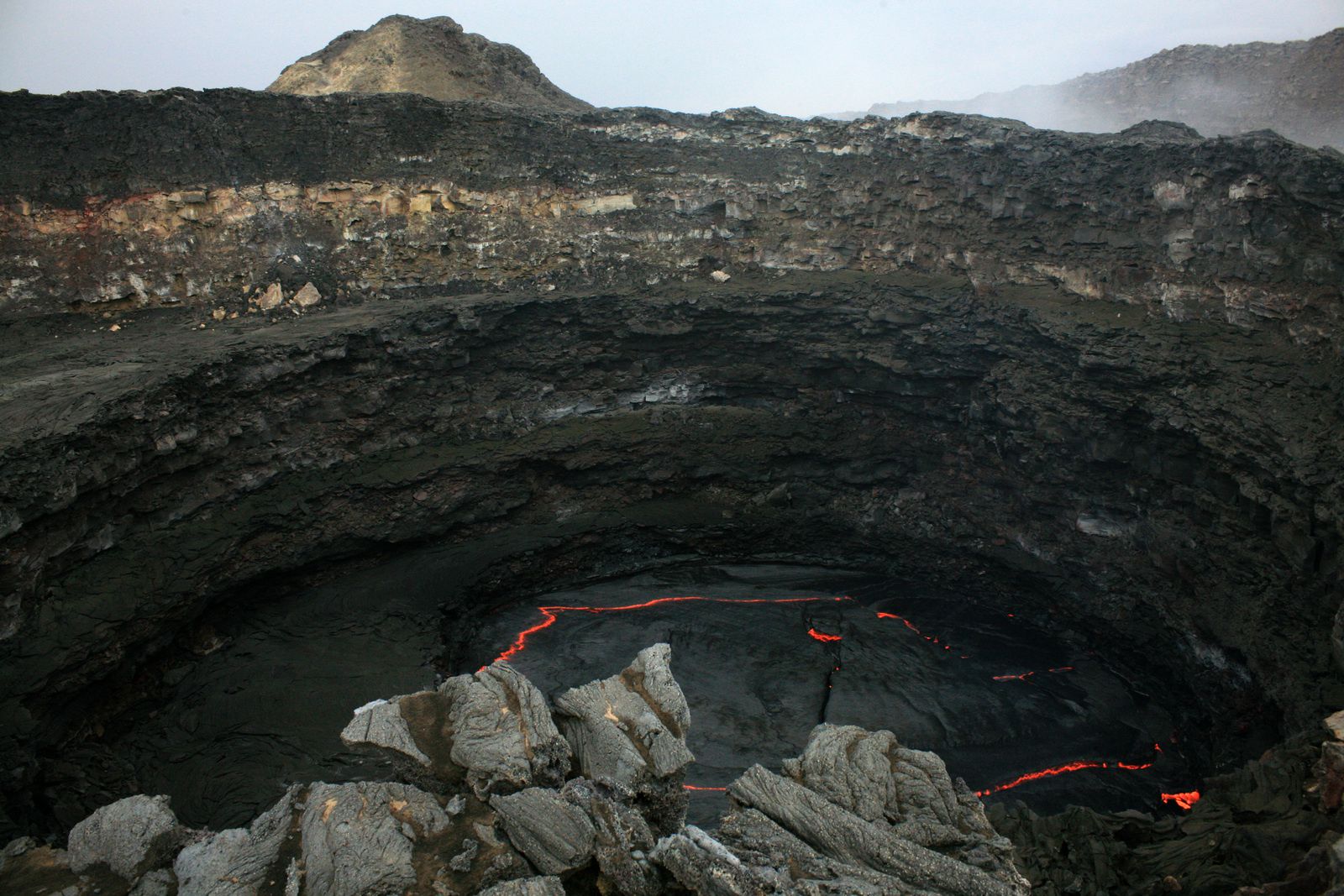 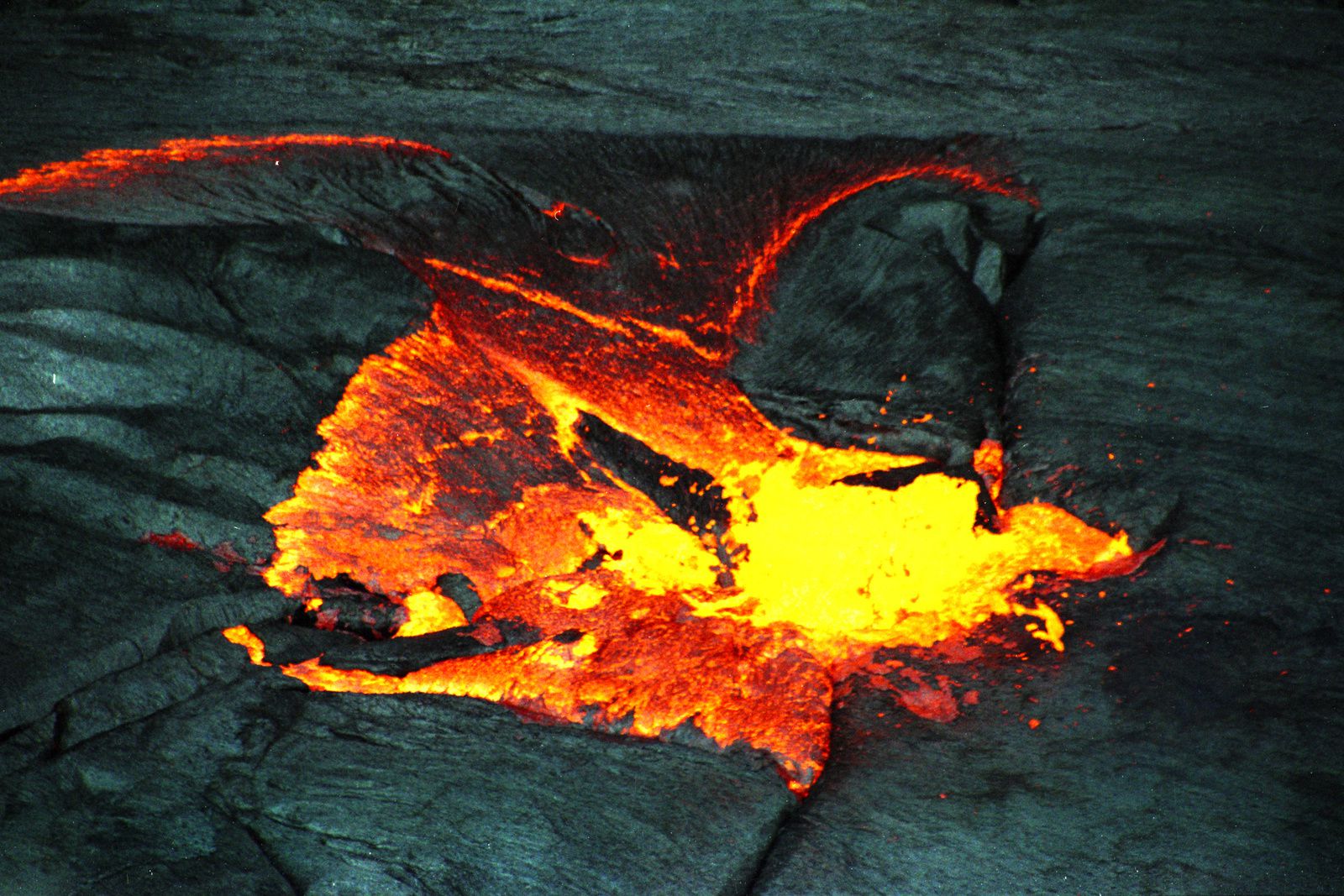 In February 2007, during a trip with Adventure & Volcans, I observed several small terraces in the south pit crater, filled by an active lava lake, deep, twitching, and undermining the walls. A strong degassing north pit crater prevents a good visibility, and requires the use of masks.

A picture of 2008 shows a similar situation in the south pit; while the north crater suffered a massive collapse earlier this year, following the local guide M.Matwose. Chris Weber noted in February 2009 that the pit crater north has 3 levels, which the intermediary is covered in recent lava flows.

The south crater measuring 190 m by 150 m EW-NS, with a lava lake 60 meters wide, about 20 meters below the floor of the caldera, with a regular fountaining, and projections on the western edge of the crater. The level of the lava lake known oscillations of 5 meters and is ready to overflow on the terraces.

Comparative diagrams of the morphology of the pit crater between the two visits of the C.Weber team / December 2002 and February 2009 In February 2010,  VolcanoDiscovery reports that the lake level of the South pit climbed to 10 m.under the crater rim, and frequently overflow the terrace.

Significant changes take place in November of the same year : a team of VolcanoDiscovery reports, upon his arrival on 25 November 2010, that the lava lake has reached the level of the northern edge, and all the south crater is filled by overflows, which also relate the floor of the caldera, where a lava flow has reached the west wall.

The lake itself is circular, with a diameter of approximately 40 meters and is contained in a slag ring; its level varies from 2 to 4 meters at a rate of about 30 minutes, with a degassing projecting spatters between 30 and 70 m. height. During the observation that lasts 3 days, the lake overflows 12 times, fueling the new cast and revise its slag ring. 2012 is a "black year", punctuated by an Afar rebel attack on 17 January (5 killed, 7 wounded and 4 taken in hostage). The government allows the resumption of expeditions after securing the Eritrean border by the army.

In December 2013, the level of the lava lake is pointed at 5-10 meters under the edge, depending on location.

In February and November 2015, two expeditions inform that the lava lake is very active, just a few meters below the level of the caldera.

Guy Saint-Cyr, from Aventure & Volcans, during his last coaching end of January 2016, film the lava lake near overflow and agitated by impressive bubbling. 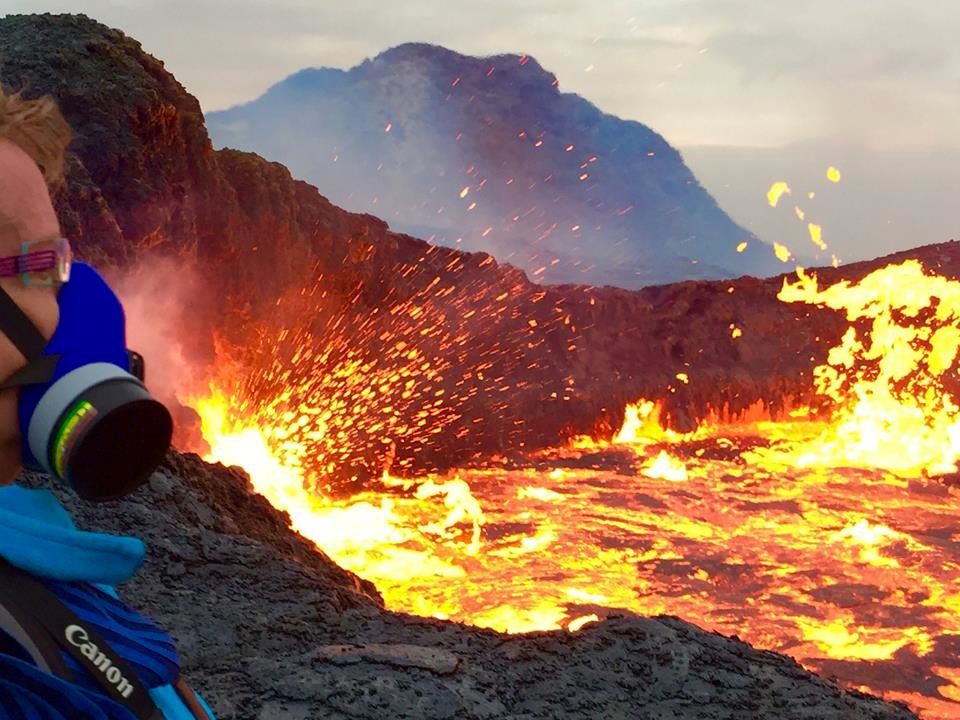 Erta Ale - January 2016 - the ups and downs of the lava lake, about to overflow - photo Aventure & Volcans / Guy Saint-Cyr