To complete the description of this part of the Iberian west, two sites are interesting: Ribeira d'Ilhas and Lomba dos Pianos

In the Lusitanian and the Algarve basins, the last phases of rifting occurred in the late Early Cretaceous, while the initiating of the expansion of the seabed of the Iberian Abyssal Plain began around 133-128 Ma.

Tectonic inversion of these basins is a consequence of the simultaneous occurrence of a rapid collision and subduction between the Iberian, European and African plates, which began in the Cretaceous and peaked during the Miocene in the Lusitanian Basin. The Algarve has experienced the compression effects of convergence Africa - Iberian Peninsula (Spain and Portugal today) to the late Cretaceous and early Miocene. The Late Cretaceous alkaline magmatism in the onshore sector of the West Iberian Margin. Circles indicate all of the sampled intrusions. Portuguese Geology and batimetry adapted from data available at http://www.iambiente.pt/atlas/est/index.jsp / Doc Rui Miranda - Ref. by sources

Summary of the most important geodynamic events in Iberia during the Cretaceous. Dates for the limits of the epochs and ages of the Cretaceous period from Gradstein et al. (2004) . Ages from geochronological data in full lines. Geologically interpreted ages in dashed lines / Doc Rui Miranda - Ref. by sources The beach of Ribeira d'Ilhas, surrounded by the lava of volcanic complex of Lisbon, has its cliffs, cut by the valley of the river Cucos, interesting structures : stratified sediments and  differently eroded from the Cretaceous,  which are traversed by numerous faults fulfilled by dykes.

On the edge of the ocean, one can see traces of a laccolith surrounded by a metamorphic aureole, exposed by erosion.

A laccolith - from the Greek Lakos, cavity and lithos, rock - is an intrusive rocks mass, rounded at the top, which creeps into a sedimentary series. The melting body does not reach the surface or stops in the lithosphere to extend laterally between parallel layers. The site is located between the beaches of Samara / Assafora and the Magoitoe, a beautiful beach range of sizes and a consolidated dune, formed by sand accumulation generated by the combined action of marine and wind erosion, established there about 10,000 years ago, around Sintra.

This magmatic sill, 3 km long and 17-20 meters thick, is dated to about 72 million years. It formed when magma do an intrusion into the sedimentary limestone (Cretaceous in horizontal layers), during the formation of the volcanic complex of Lisbon. A disused quarry makes a good observation site of the basalt / dolerite (*) sill in the sediment layers of sandstone and marl. In crevices can be observed zeolites (**) white and pink.

The prismatic disjunction, perpendicular to the cooling surface, and like organ pipes, earning him his name.

In addition to the prismatic disjunction, there is a spheroidal disjunction causing desquamation of diabase; the origin of this erosive phenomenon is the presence of almost perpendicular fractures which are preferential sites for the water in motion, with consequent alteration of the rock.

(**) A zeolite,  from the Greek "Boiling stone" is formed of crystal structures characterized by a microporous aluminosilicate skeleton whose empty spaces are initially occupied by cations and water molecules. Naturally formed in sediments, zeolites have the property of swelling under the effect of heat. They can hydrate and dehydrate reversibly. 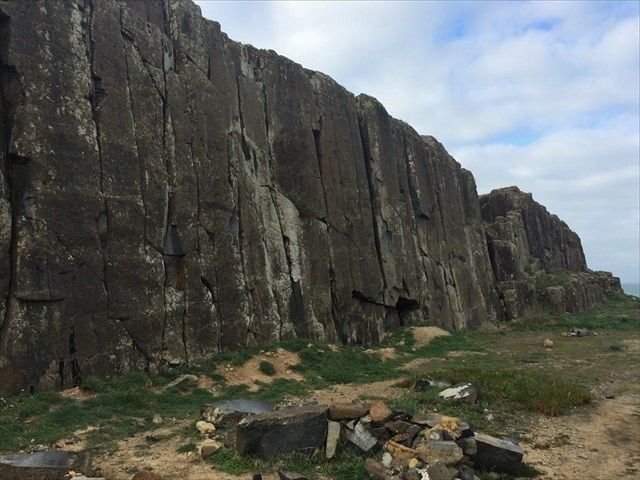