Details on the evolution of the Villarica, Sinabung, Bárðarbunga and Aso volcanoes. The POVI reported changes in the crater of the Villarica during the second part of October, 2016.
The crater of the volcano, with a diameter of 200 meters is home, to 80 meters deep, of a pit containing an active lava lake, whose level has not varied between observations on 17 and 20 October.
After an interruption due to weather conditions, the observations of October 27 and 28 have revealed the presence of two active wells. One of them is surrounded by a small pyroclastic cone, nestled in the crater floor. This cone has parallel annular cracks on its left bank ... indicating an ongoing slump.
On October 30, the cone collapsed, and the level of lava in the well has recovered the level measured on 17 October. Villarica - developments in the crater between 17 and 30 October - doc. Povi

In Sinabung, an eruption was accompanied on November 6 at 7:46 p.m., by a plume rising to an altitude of 1,500 meters and a pyroclastic flow that has advanced 700 meters towards the ESE. Ash fallout are recorded on the capital of Karo. In Iceland, following the eruption that formed the Holuhraun lava field in 2014-2015, the heat of it remains as it melts the snow. In Japan, the series of earthquakes that marked Kumamoto Prefecture in last April was cushioned by the magma chamber of the volcano Aso, according to studies by the team A.Lin professor of Kyoto University.

The fault rupture that spanned nearly 20 km was inhibited by the presence of the magma chamber of Aso, situated at a depth of 6 km under the caldera.
But a few rows of linear ruptures stretched over several kilometers on the ground in Mount Aso’s caldera. Scientists believe that these vertical fractures appeared under the pressure of the magma chamber when sheblock the fault. They range in depth and could become conduits through which magma can infiltrate and mount. This situation requires a reassessment of the risk of eruption of Aso volcano. 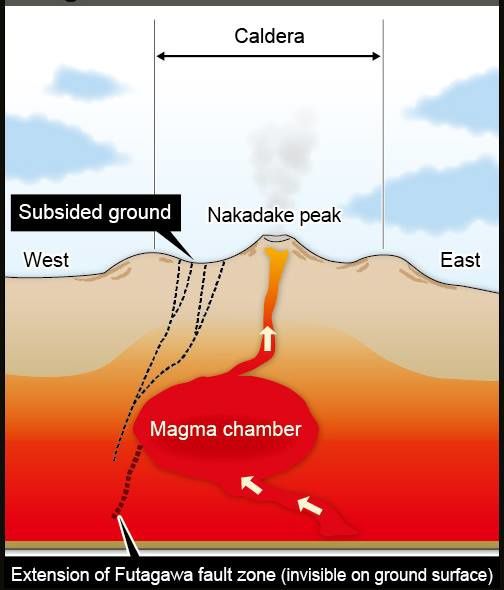 Aso San - faults under the volcano - Doc. The Asahi Shimbun