News of Colima, Turrialba, Sinabung and other brief news.

Since the end of October, webcams show a return of the summit dome at Colima, which has small block avalanches.
On 1 November at 2:59 local, a greater collapse generated a large avalanche. In Turrialba, the Ovsicori reported on November 1 at 5:30 a plume mainly composed of water vapor and gases.

Seismographs indicate increases and decreases the amplitude of tremor and ash emissions at 20:22 on October 31 and the morning of November 1. The wind is blowing toward the northeast, and ash falls were reported in some areas of San José.

The RSN summarizes the eruptive activity of Turrialba between January 2014 and October 2016, announcing that the current condition of the volcano is entirely normal and consistent with a passage from resting stage to an active stage. The full text of the report at this link. 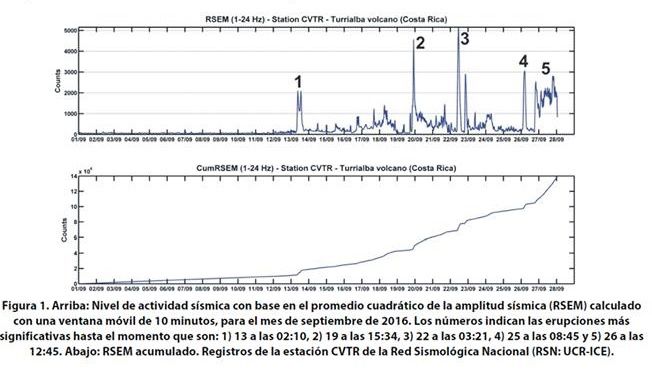 The Sinabung continues its activity in the last week, with according to the PVMBG, frequent pyroclastic flows on November 1, hurtling eastward over 2,500 meters, accompanied by a high ash plume rising to 1000-1100 meters .
The summit dome has indeed reached alarming proportions, and the formation of a new lava lobe in the slope is confirmed by photos.

The Observatory recalls that the prohibited area is a 3-km radius around the top, increased to 6 km on the slope ESE and to 7 km to the south. The population living near rivers should be mindful of the risk of lahars. Aventure et Volcans has posted a video shot by Guy de Saint Cyr and Seifegebreil Shifferaw on 23 and 24 October during a reconnaissance trip in Ethiopia, where the level of the lava lake of Erta Ale is at its the highest level, ready to overflow. - Video below or by following this link.