News of  Reventador, Fuego, Sabancaya, Nevados of Chillan and Kerinci. In Ecuador, a field visit to the Reventador by the IGEPN teams between 11 and 17 November provided an update on its current activity:

The level of activity remains high, with no significant variations for months. Two types of activity are recorded: effusion at the North vent, and explosion at the south vent. During the visit, the interval between major explosions was 2 to 4 hours, interspersed with smaller and nearer emissions.

Reventador - effusive activity of the north vent, and lava flow on the N and NE flanks - note the elevated temperature at the top - doc: P. Ramón / IGEPN .2016.11.17

After an interruption of a few days, activity returned to the Fuego on 17 and 18 November, characterized by moderate to strong explosions, accompanied by plumes of ashes rising to 4,400-4,800 m asl., before drifting for more than 10 km to the west.
Incandescent pulses rise 200 meters above the crater generating small lava flows towards the barrancas Ceniza and Taniluya and avalanches of blocks. The explosions continue at Sabancaya / Peru. On the 18th of November, at 10:43 am, the ashes rose up to 3,500 meters above the crater before dispersing over 40 km to the south and southwest of the volcano.

The study of rocks emitted on the 15th and 16 November continues at the OVI; At the first examination, they would be similar to those issued during the last Sabancaya eruption. The Nevados of Chillan volcanic complex has, over the past few months, presented a series of explosions and volcanic particles emissions. This superficial activity was located on the eastern flank of the Nuevo and Arrau volcanoes.
On November 18, 2016, the Sernageomin reported an eruptive pulse, characterized by two explosions at 5:36 local; the largest was accompanied by an ash plume reaching about 1,200 m above the point of emission.
The technical alert level remains in Amarillo, with a prohibited zone of 3 km radius around the active craters. 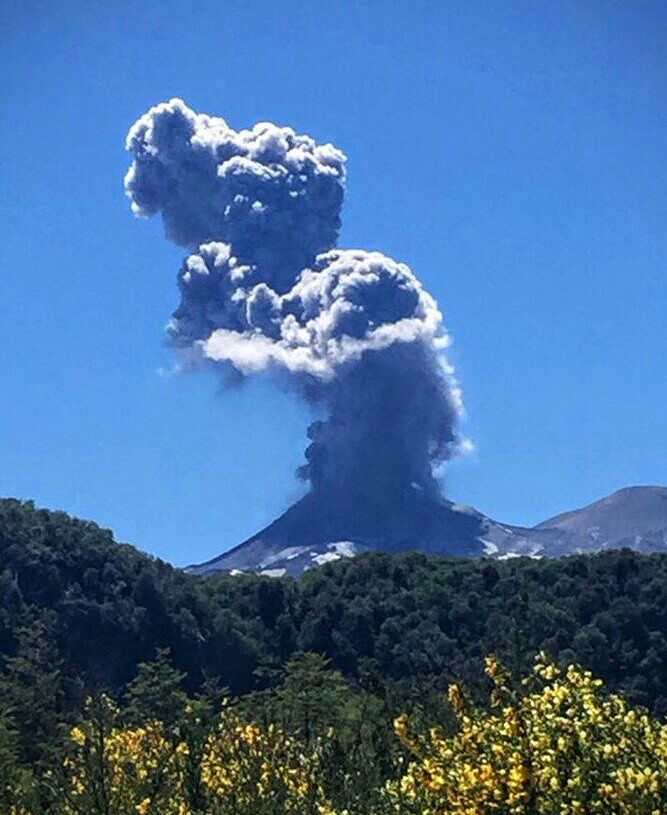 In Kerinci, on Sumatra, the eruption continues.

This 19th November at 7:24 WIB a plume of ash high 800 to 1,000 meters above the crater was moving towards the southeast.
The PVMBG recommends respecting the prohibited area of ​​3 km radius around the crater, including for community activities, and to aviation, avoiding the area, ash can be present at high altitude and threaten the flights safety.