Created by the volcano, Yerevan, the pink city. 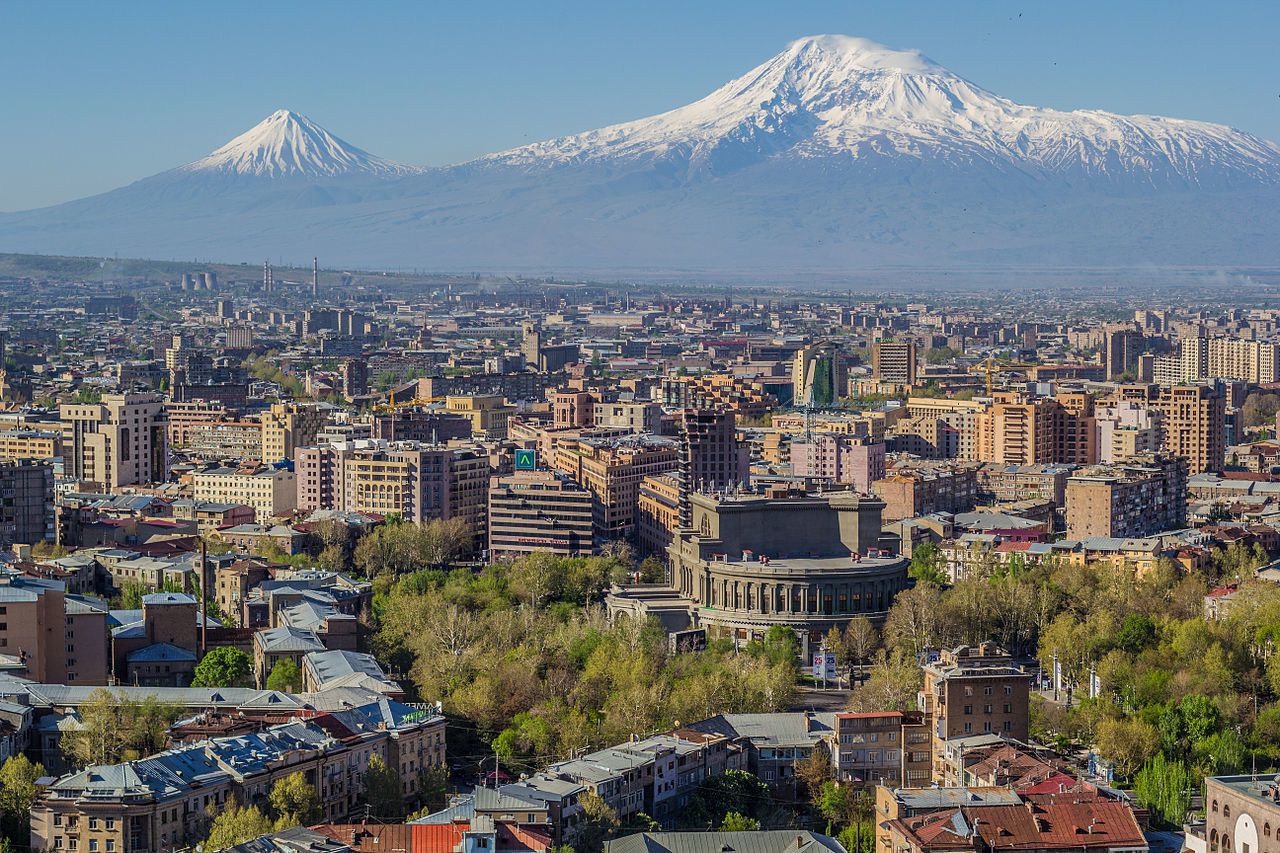 Yerevan, the capital of Armenia, reveals all its charms when approaching at sunrise or sunset ... the pink city stands out on the volcano Ararat which dominates the region.

This city, one of the oldest in the world, was founded in 782 BC by King Arghisti I. It takes its name from the Urartian fortress of Erebouni, of which only a few ruins remain.
Eleven cities have evolved on the same site until today.

In November 1920, the Soviet regime made Yerevan the capital of the Armenian Soviet Socialist Republic, one of the 15 members of the Soviet Union. The city was transformed from a small town to a modern metropolis with more than a million inhabitants ... but it was always the same stone that was used to replace the old houses with Soviet-style buildings.

At the fall of the Soviet Union in 1991, Yerevan became the capital of the independent Republic of Armenia. The pink stone of the volcano:
This pink-colored stone is an oxidized ignimbrite from the upper part of a thick pyroclastic flow that is widespread around Yerevan.
The volcanologist Jack Lockwood says that this color results both from the speed of the flow, from the place where it stopped (a flat ground favoring a thick deposit), and from oxidation. Mount Ararat is a polygenetic stratovolcano, consisting of two main cones: the greater and the lesser Ararat.
The massif is composed of 1,150 km³ of pyroclastic dacitic and rhyolitic debris, and dacitic, rhyolitic and basaltic lava flows. It covers 1,100 km², of 45 km by 30 km long.

The greater Ararat, the most westerly cone, dominates by about 3,000 meters the floor of the pull-apart basins Iğdir and Doğubeyazit, which it separates; It culminates at 5.165 meters.
It is separated from the lesser  Ararat, 13 km apart, by a fissure oriented north-south, expression on the surface of an extension fault.
Many parasitic cones and lava dome are the witnesses of flank eruptions along this fault and on the flanks of the two main cones. 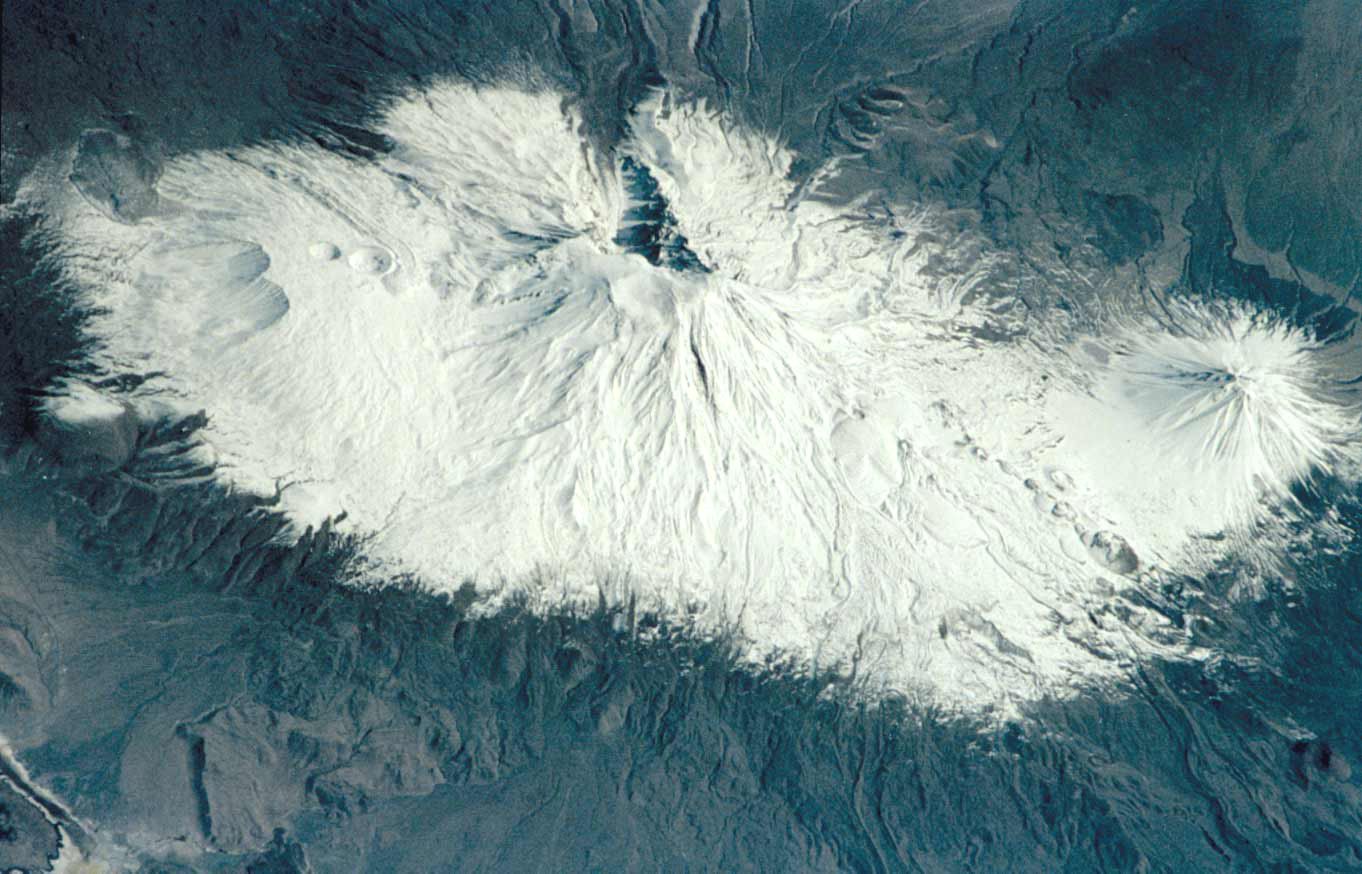 1. A phase of fissural eruption, from Plinian to subpliny eruptions, deposited a layer of pyroclastic rocks thicker than 700 m and some basaltic flows before the development of Mount Ararat.

2. A phase of edification of a cone when the activity is located at a point of the crack; It produced lava flows thicker than 150 m and pyroclastic andesitic and dacitic flows. A subsequent eruption fed basaltic flows, forming a total of a low-profile cone at the greater Ararat.

3. The climatic phase is characterized by abundant flows of andesite and basalt which formed the current cones of the greater and lesser Ararat.

4. The eruptions of Mount Ararat went through a phase of flank eruption, during which a major north-south fault shifted the two cones, and erected parasitic domes and cones, one of which produced voluminous flows of andesite and basalt, containing lava tunnels.

Holocene activity is poorly documented ... but thanks to archaeological excavations, and history trammelled orally, we can date the eruptions of Mount Ararat from 2500-2400 BC, from 500 BC, 1450 and 1783.

The last activity in 1840 was phreatic, accompanied by pyroclastic flows originating from radial fissures on the upper northern flank. More than 10,000 people were killed by a landslide associated with a debris flow, damage from the eruption and an earthquake of M 7.4.