Anniversary of the 1947 eruption at Hekla. The eruption of the Hekla in 1947 - Photo Sveinbjörn Þórhallsson.

After earthquakes, the eruption begins in an enormous roar. A crack length of 4 km. has opened; The first phase is Plinian and the eruptive plume quickly reaches the height of 30,000 meters. Around 7:10 the first pumices fall on Fljotshlid and the tephra and ash form a thick layer of 3 to 10 cm. Between the Vatnafjöll and the Hekla, the layer of tephra reaches a meter, dotted with bombs of large diameter. Two days after the onset of the eruption, the ashes return to Helsinki in Finland.
About 3.500 m³ of lava are produced per second during the first 20 hours ; lavas cover more than 12 km². Glacial melting will cause flooding in the Ytri-Ranga River. The eruption of the Hekla in 1947 - Doc. Oregonstate Univ.

On the second day of the eruption, eight distinct eruptive columns are visible. At the lower end of the crack opens a crater named Hraungigur (the lava crater) from which emanates a constant flow of lava. Another crater of explosion forms on the southwest flank, called Axlargigur (the crater of the shoulder).
The eruption will last just in mid-April of the following year, the area covered by the lavas reaching 40 km², with a maximum lava flow's thickness of 100-meter . The one of the Morgunblaðið newspapers of 30 April 1947 relates the eruption of Hekla, one of the most important events of the 20th century in Iceland - Iceland Monitor

This eruption was the first in Iceland to be photographed, filmed and commented in real time by the media. A reporter from Morgunblaðið described it as follows:
"The pillars of fire at the top of the mountain stretch 800 meters into the air and throw incandescent rocks of enormous size.These large rocks ascend with magic power before descending into the ocean of fire {...} Half an hour after a violent earthquake, the Hekla is surrounded by a thick volcanic cloud, from its base to the sky. Flashes of fire are regularly observed through thick smoke, and in the farms near Hekla, people hear thunderous noises, and doors and windows are shaking. "
Before the era of photography, the eruptions had been recounted by documents drawn, evoking for Hekla the "gates of Hell". The Erupting Hekla - detail of the Abraham Ortelius map / 1585 - The Latin text translation: "Hekla, perpetually condemned to storms and snow, vomits rocks in a terrible noise" 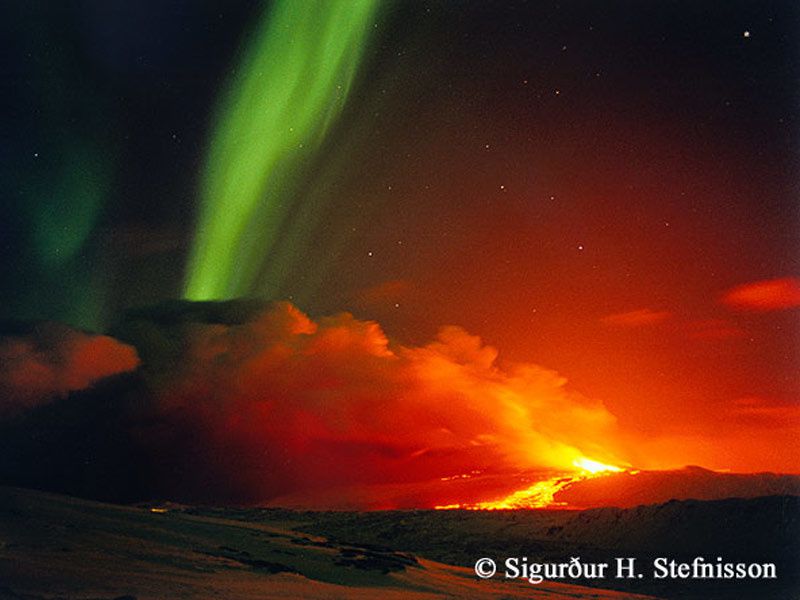 An eruption of the Hekla dominated by an aurora borealis - photo Sigurdur H. Stefnisson