After four days of calm, a new eruptive episode began at Etna on April 19, 2017 at 9:34 UTC / 11:34 local time; It began with a lava emission at the pit crater located under the rim of the mouth of the old saddle between the two southeast cones.
A few minutes later, a vent situated further upstream presented a moderate strombolian activity. The tremor is soaring. The lava flow descended on the southern side of the SEC, accompanied by small collapses, marked by small plumes of brownish-red ashes. It forms two distinct arms, separated by an elevation of the cone; The eastern arm entered the Valle del Bove, following the same route as the flows of the previous episodes, from 10-11 and 13-15 April.
The event was marked with an orange aviation code by the VAAC Toulouse, due to strombolian activity. 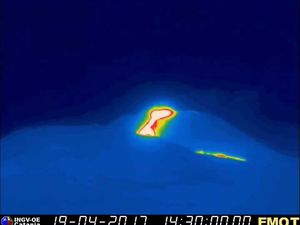 In Poas, a tremor of large amplitude was recorded between 6 am and 8.40 am, accompanied by small eruptions on a quasi-continuous basis, before opening at 8.43 am on a larger eruption filmed by the Ovsicori volcanologists on site at that time and by The RSN webcam.
As a result, access to the volcano remains closed "sine die" since Monday.

In Turrialba, activity remains constant, characterized by emissions of steam, gas rich in sulfur and ash.
The incandescence in the evening of 18.04 / 20h-20h30 at the level of the crater is so intense that it passes the webcam in the visible spectrum.
Note that these events are not connected, since there are no connections between the magmatic chambers of Turrialba and Poas volcanoes.

Two calmer images to close: degassing at the Copahue / Chilio-Argentina border, and a light lenticular covering the Popocatépetl.