After several months of relative calm, Poás volcano began to reactivate with small phreatic eruptions and ash emissions from the dome due to an overpressure of the system. A plume consisting of steam, ash and water was issued shortly after 11 am. Saturday, April 1, and reached a height of 60 meters, according to Vulcanologists Gino Gonzalez and Yemerith Alpízar, of Volcanoes without Borders, who visited it over the weekend.

The two specialists were in the southwest sector of the colossus crater where they found that the lake increased its temperature to 3°C compared to last month (the temperature is now 38°C). They observed that the lake has a gray color with sulfur floating in several areas, with a very acidic gas that require the use of masks. For the moment there is no presence of magma.
Similarly, Gonzalez and Alpízar found a fine gray material with black particles around the lake. On the 4th of April, Mount Etna presented at dawn a trio of incandescent sites, sharp on the snow that covers the summits: the Voragine, the southeast crater and the effusive vent. Etna 04.04.2017 / at dawn - Three incandescent points on the snowy summit: on the left, the Voragine - on the right, the southeast crater, and the effusive vent - photo Boris Behncke

The OVPF has put online two novelties concerning the Piton de La Fournaise:
Two new webcams, previously available for internal use, are now available.
In addition to the monthly newsletter, a daily "activity preliminary" bulletin is updated at 10 am, with informations over seismicity and deformations. 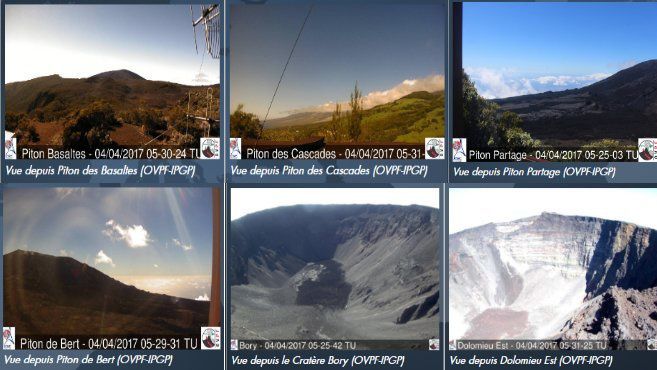