Brief eruption at La Fournaise; Activity of Poas and Sheveluch.

Since 13:40 local time on May 17, 2017, a seismic crisis is recorded on the instruments of the Volcanological Observatory of Piton de la Fournaise. This seismic crisis is accompanied by rapid deformation, meaning that the magma began its propagation towards the surface. The GPS of the summit zone recorded an inflation, witness of the pressurization of a superficial source, and the GPS in far field also register an inflation, witness of the pressing of a deep source.

An eruption is therefore likely to occur sooner or later.
In these circumstances, the prefect of La Reunion decided to trigger alert 1: "probable or imminent eruption" of the ORSEC * Volcan plan, starting this Wednesday May 17, 2017 at 14:20.
As a result, public access to the Fouqué enclosure, whether from the footpath of the Pas de Bellecombe or from any other path, as well as the laying of aircraft in the volcano area, is prohibited until further notice .
The National Gendarmerie and the National Forestry Office have been entrusted with the task of ensuring the application of these safety measures on the site. Piton de La Fournaise - Evolution of the RSAM (indicator of the volcanic tremor and intensity of the eruption) on the last 24 hours on the seismic station HIM, located at the foot of the Sainte Rose Nose (hours are UTC, Hour UTC = local time - 4) (© OVPF / IPGP)

After the increase in seismic activity observed on Wednesday May 17, 2017 from 13:40, Piton de la Fournaise erupted that day at 8:10 pm. According to the information provided by the Piton de la Fournaise volcanological observatory, the eruption takes place and is confined to the enclosure at the northeast flank of the Dolomieu cone.
As a result, the prefect of Reunion has triggered today at 9 pm, alert 2-2 of the plan "ORSEC * Volcano": eruption in progress.

The eruption was brief, and the eruptive tremor phase that characterized it, lasted only about five hours, stopping at 01h local and marking the end of the surface, or sub-surface feed. Volcano-tectonic seismicity continues: 27 earthquakes have been recorded under the Dolomieu and its eastern flank between 01h and 06h local time. The Furnace has not said its last word ! 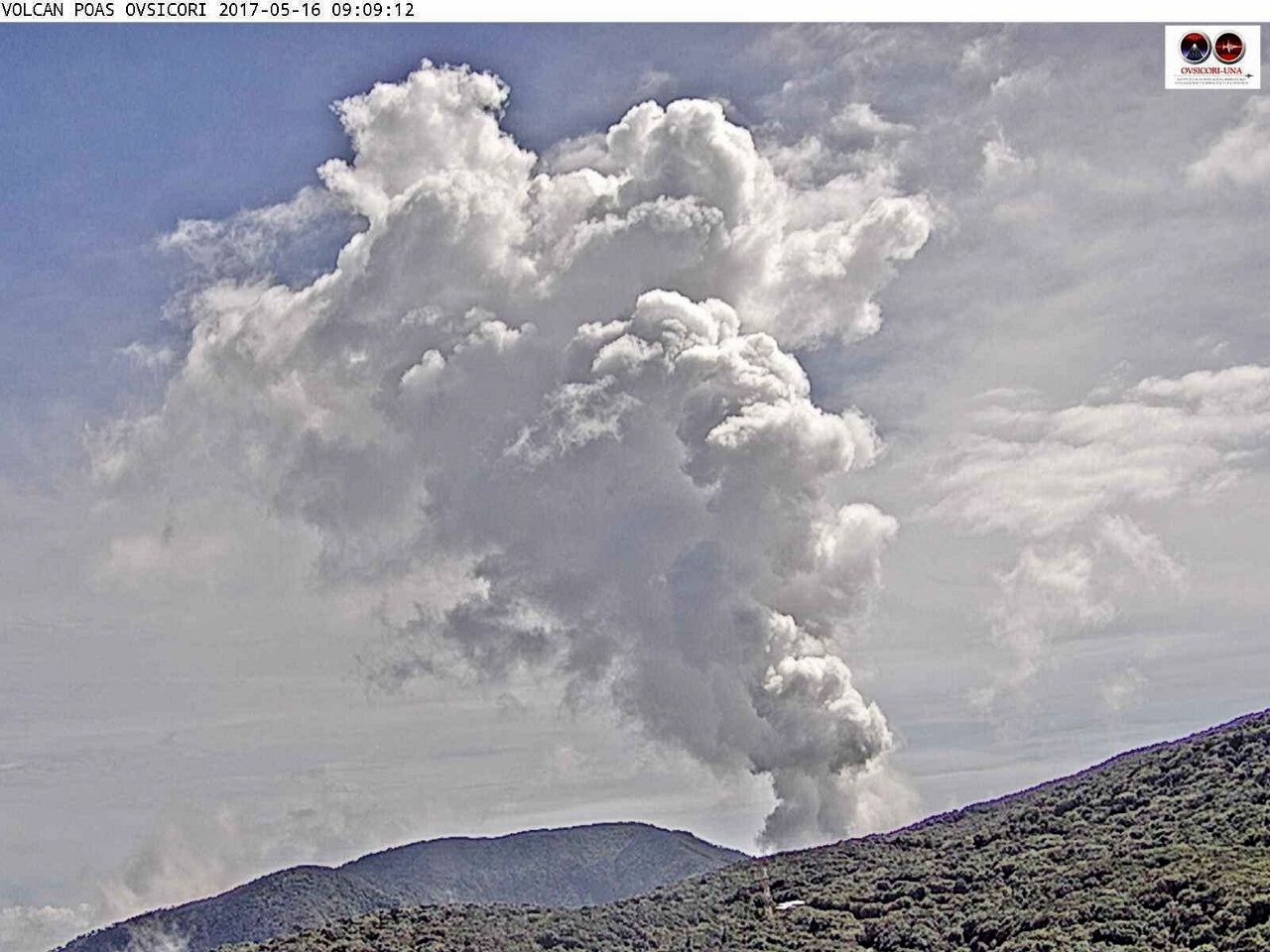 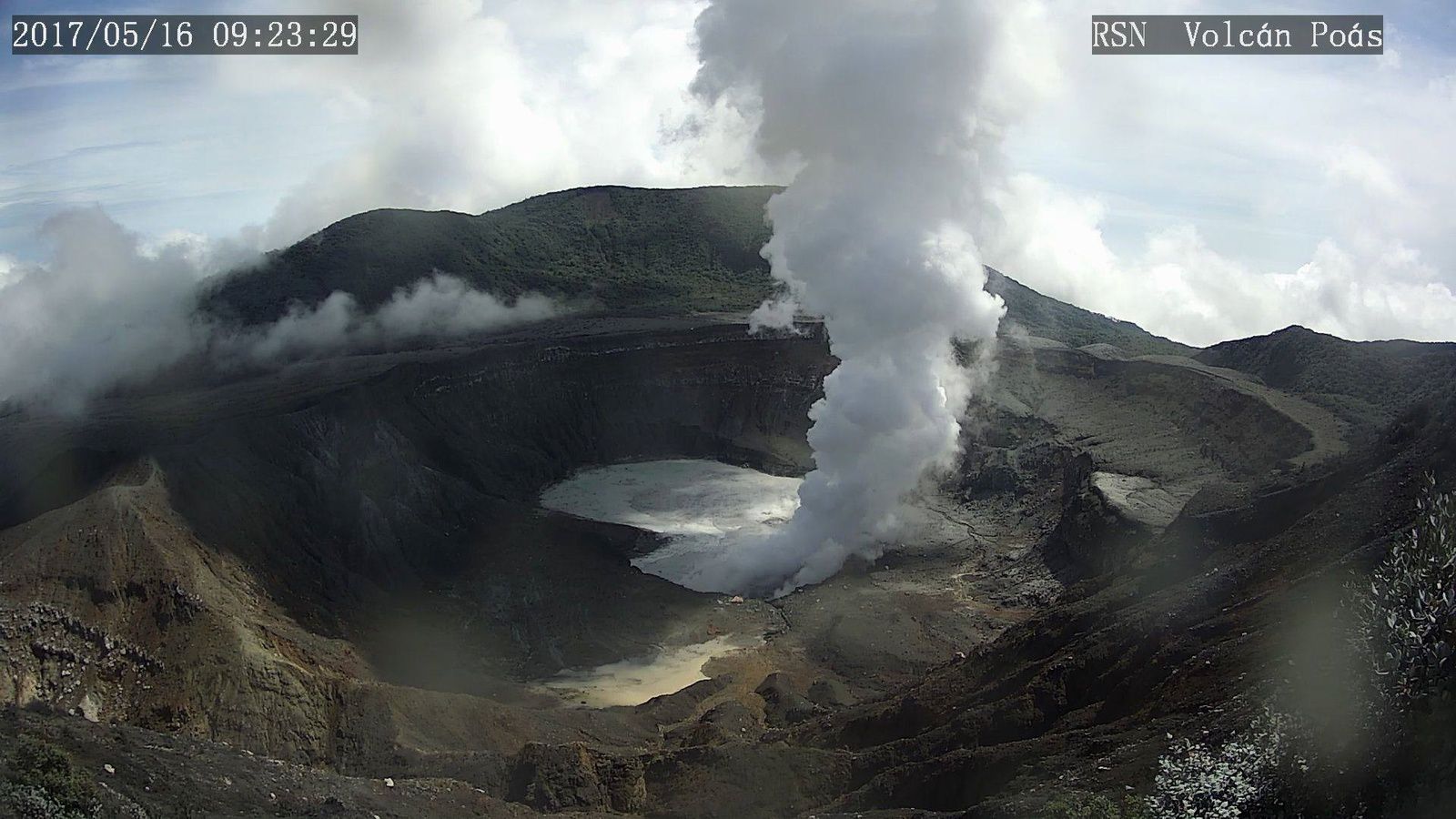 Since the 22nd of April, the Poas has a moderate activity, characterized by small intermittent water eruptions. At the same time, significant changes are observed at the Laguna Caliente, both at the structural level and at the gaseous level ...  the plume reached on 17.05  more than 1,000 meters in height. Nocturnal incandescence is noticed by webcams.
The seismic activity consists of volcanic tremor of variable amplitude and VT earthquakes; The RSN reinforced its surveillance system with the installation of two additional seismic stations and a new camera. In Sheveluch, after the pyroclastic flows of 13 May, the field teams carried out a difficult sampling on the 14th, given the water-saturated terrain and the stalemate of the vehicles. The consistency of the material collected is very different from that of previous pyroclastic flows, similar to cement. (Volkstat)

On 16 May, around 19:00 local time, another pyroclastic flow descended the flanks of the volcano.
On 17 May, the Aqua MODIS satellite produced an image showing the extent of the ashes on the snow, to the south and east of the volcano. The KVERT reported two ash emissions at 22 and 23:30 UTC on 17.05, drifting northeast of the volcano over 170 km.