Anniversary of the Tarawera eruption. 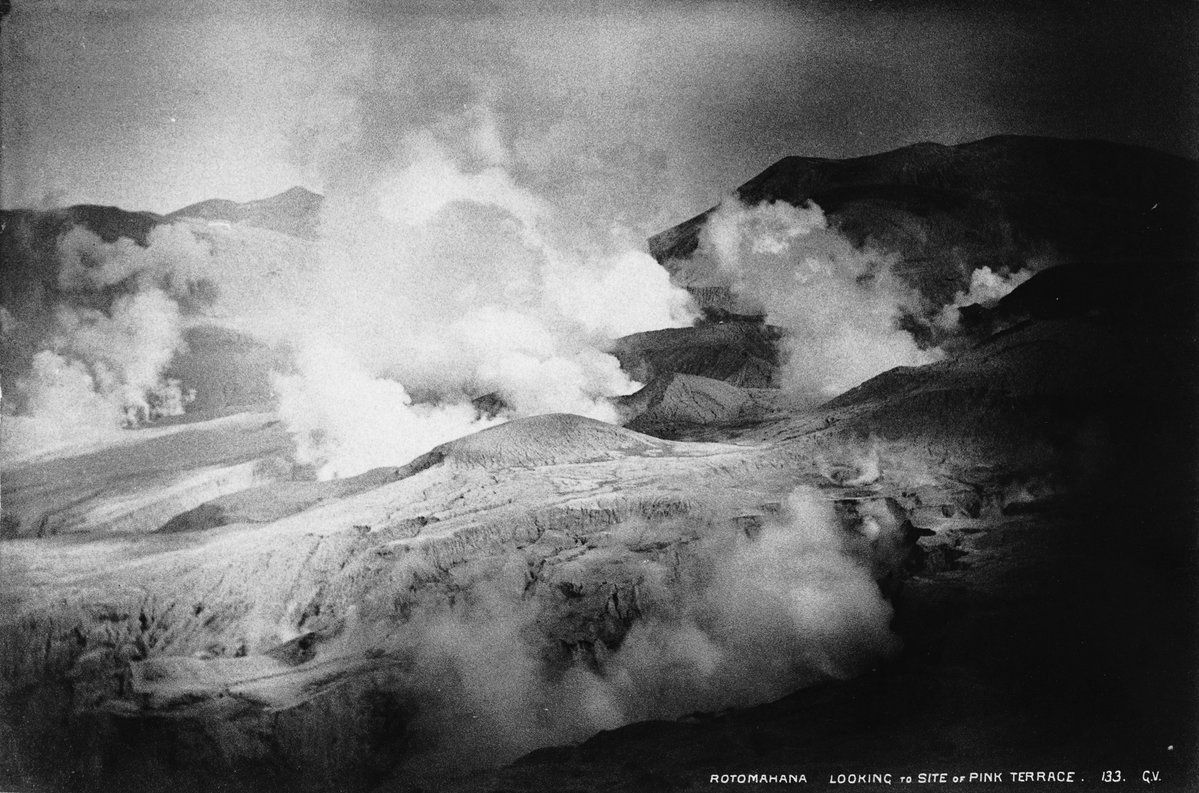 At 0.30 am on June 10, 1886, the local inhabitants were awakened by violent tremors marking the beginning of the eruption. The initial phase is of the phreatomagmatic type, resulting from the rise of a basaltic magma - different from the rhyolitic magma of other eruptions - and its encounter with groundwater at a depth of 300 meters below the surface. At 1:30, the flank of the Wahanga dome explodes, opening a crack. The opening in stages and the widening of the eruptive fissure result in a series of 13 craters through the Tarawera's complex of domes. Mt Tarawera - archive footage from the eruption of June 10, 1886 - photo Waimangu Valley via Brad Scott On the left, Tarawera - the Okataina volcanic center and the Tarawera 1886 eruptive fissure - on the right, Tarawera 1886 rift map, Tarawera volcano and pre-eruption lakes - Doc. GNS - a click to enlarge

Around 2:30 am, three peaks erupted, the viscous lava domes exploded, generating plumes reaching several thousands of meters high.
The initial pyroclastic surge destroyed several Maori villages in the vicinity, the best known being Te Wairoa, and the ashes of the volcano are found as far as Christchurch. Auckland residents can see bright flashes and hear rumblings, so much so that they believe in an attack from the Russian fleet.
Pyroclastic flows will affect the south, east and north sides of the chain; they will subsequently give lahars.
In the southern part of the eruptive fissure, in contact with the waters of Lake Rotomahana, phreatic explosions create large craters. Charles Blomfield's painting, illustrating from testimony the eruption of Mount Tarawera on June 10, 1886

The main Plinian phase generates an eruptive column about 30 kilometers high, based on the analysis of the deposits, and could have stopped after four hours. A study of the deposits close to the crack corroborates the testimonies of several smaller eruptive columns feeding the main plinian column. It is now believed that the vents of 4 craters, located in an area between the Ruawahia tuff cone and the southwestern portion of the Tarawera dome, contributed to the establishment of the Plinian column. During this plinian phase, lower vents located in the northeast section of the crack had strombolian activity.
At the end of the Plinian phase, a brief phreatomagmatic phase took place, possibly as a result of a further collapse of the top of the magmatic column in the groundwater. 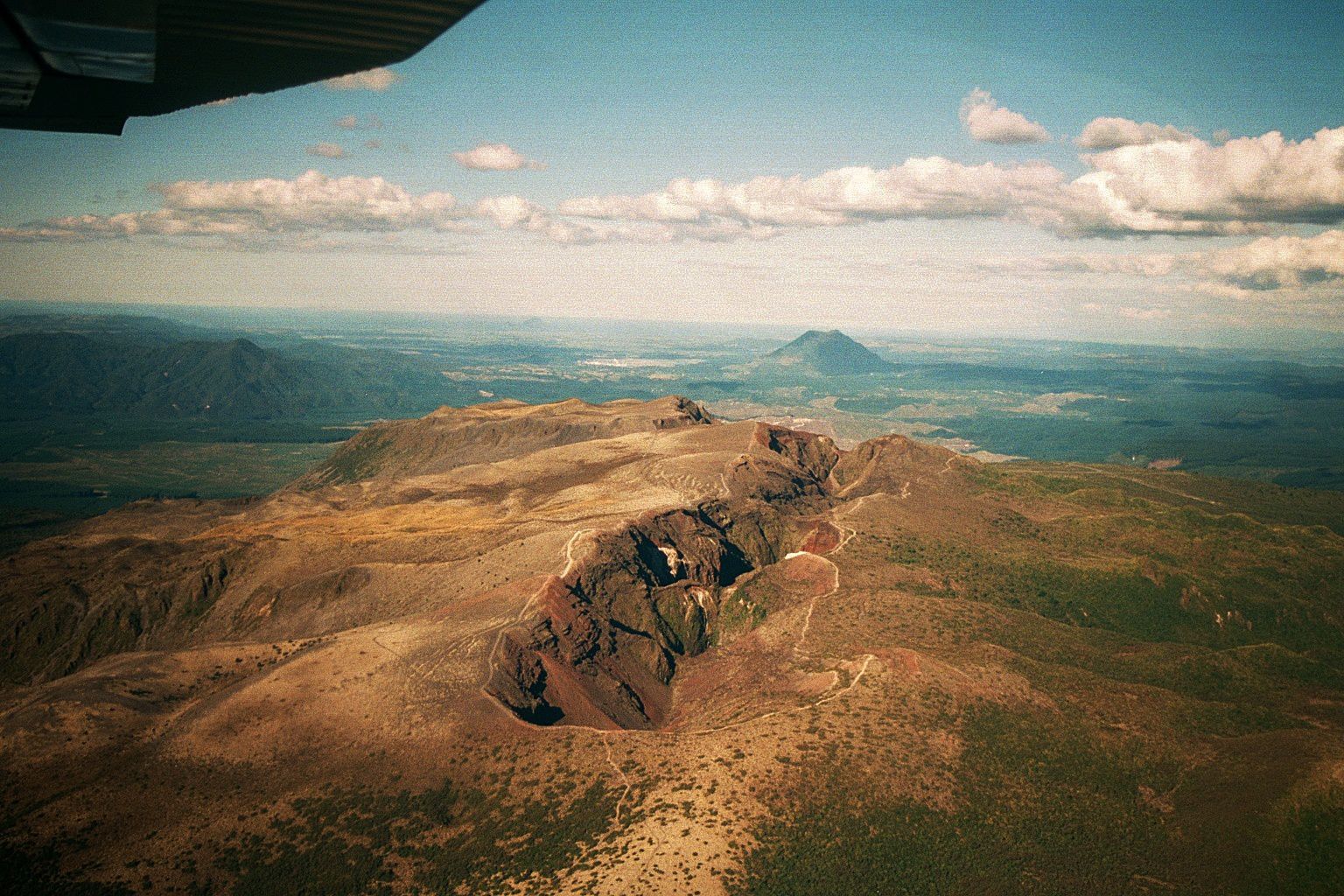 This eruption, described by the GVP as of VEI 5, opened a 17 km long rift across the summit of the mountain from Rotomahana Lake to the Waimangu Valley. A mixture of vapor and finely fragmented rock, known as "Roromahana Mud", formed by massive phreatic / phreatomagmatic eruptions, spread like a base surge for 4 to 6 km, causing destruction and death. Although some deaths were caused directly by this surge, most were attributed to the collapse of roofs under the accumulation of moist ash. Villages were destroyed and instead of the site of the Pink & White terraces, a crater more than 100 meters deep opened. Painting by K.Watkins, illustrating the appearance of the ghost canoe on the waters of Lake Tarawera before the eruption - Doc. OSU

The description of the scene by William Bird: "Tarawera Lake was like a mirror of copper, reflecting the mountain from the base to the summit; dominating the whole, a large curtain of dark clouds above and lit up with yellow and saffron. From the clouds came large balls of burning rocks, which fell at times, with splashes, in the waters of the lake ".

This eruption fascinated many people, as it mingles with the Maori culture. Eleven days before the eruption, a traditional Maori war canoe sighted sailing on Lake Tarawera. On the canoe, two rows of people dressed for mourning ... according to the Maori culture, this war canoe seems to correspond to souls transported to the mountain of the dead, Mount Tarawera. As far as history of the Maori is known, there has been no war in this area, and the presence of the spiritual war canoe is thus regarded as a sinister presentiment, foretelling death. That was the case, 11 days later.