Activity of Turrialba, Bogoslof and Cleveland. 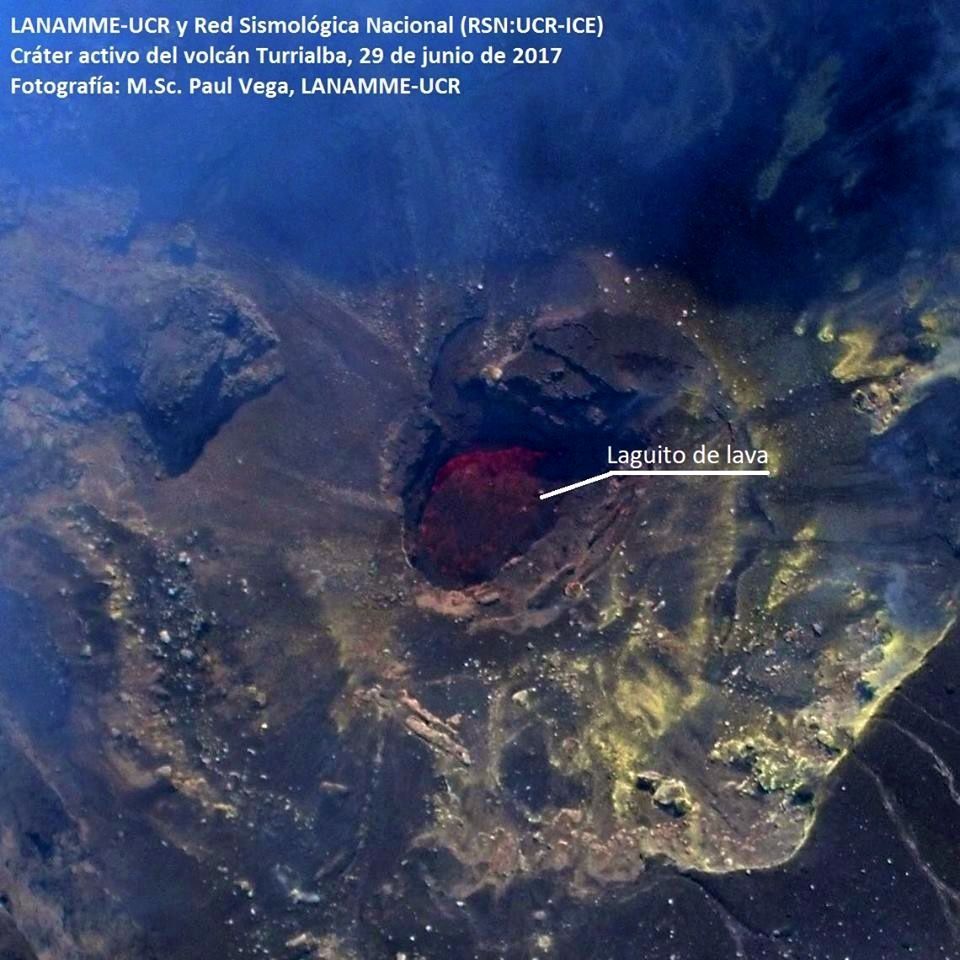 Turrialba - small opening in the crater of the volcano filled with exposed magmatic material.- 29.06.2017 - Lanamme-UCR & RSN

A joint team of the RSN and Lanamme-UCR discovered in Turrialba during an aerial inspection with a UAV on June 29, 2017, the presence of a small lake of lava of 50 meters in diameter.

Will his presence be lasting or ephemeral? In any case, it is added to the list of the rare seven lava lakes existing on the planet: Erta Ale, Erebus, Kilauea, Nyiragongo, Ambrym, Villarica and Masaya. The noticeable glow of night clearly proves the rise of magmatic material towards the surface.

In June, the active crater has a deeper, broader elliptical character, with a longer axis oriented SO-NE, which coincides with the preferential direction of the explosive eruptions. In the northern and northeastern parts of the crater, an area of ​​ash and block accumulation is observed. On 4 July, Turrialba's activity is characterized by a fluctuating low amplitude tremor and low frequency volcanic earthquakes. Passive emissions of gases and aerosols are maintained, as well as prolonged ash emissions, in a northeasterly direction. Volcanoes of Alaska - frequency over a decade of eruptions (taken into account by series) - Doc. Sidney Sullivan via AVO

In Bogoslof, two explosive eruptions were reported, on July 5 at 00:51 UTC, lasting over 23 minutes, and at 3:07 UTC, lasting over 11 minutes.
The satellite images spotted a small volcanic cloud from the first explosion drifting south of Unalaska, SE, at an altitude of 8,500 meters.
The aviation code is red. In Cleveland, on July 4, an explosive eruption was detected by seismic and infrasonic measurements from 11:19 UTC.
The aviation code rose to orange and the volcanic alert to Watch.