The Piton de La Fournaise makes its fireworks for the French National Day.

Since July 10, 2017, the seismic activity, on the verge of the summit area of ​​Piton de la Fournaise, has resumed significantly. Thus 155 superficial volcano-tectonic earthquakes (<2 km deep) were recorded under the summit zone during the last 7 days. The majority of these earthquakes are located below the southern edge of the Dolomieu crater between 500 and 1000 m above sea level. 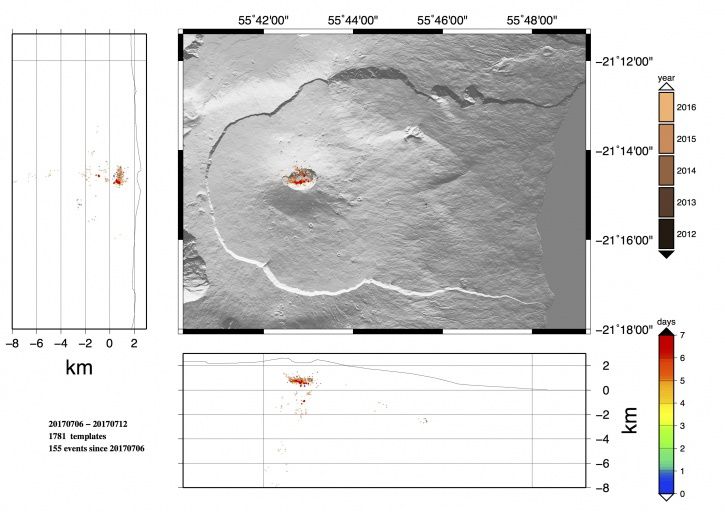 Piton de La Fournaise - 13.07.2017 - Location of earthquakes over 7 days (colored bars). Only locatable earthquakes have been shown on the map. The observatory records seismic events not shown on this map because they can not be located because of their low magnitude. (© OVPF / IPGP)

Parallel to the resumption of the seismicity, the deformations recorded on the permanent GPS stations of the OVPF show a resumption of inflation (swelling) of the building.
CO2 concentrations in the soil at the Volcanic Gîte have been declining in recent weeks.
All these parameters show recharge, pressurization and embrittlement of the surface reservoir, located beneath the summit craters at about 2 km depth. (OVPF) 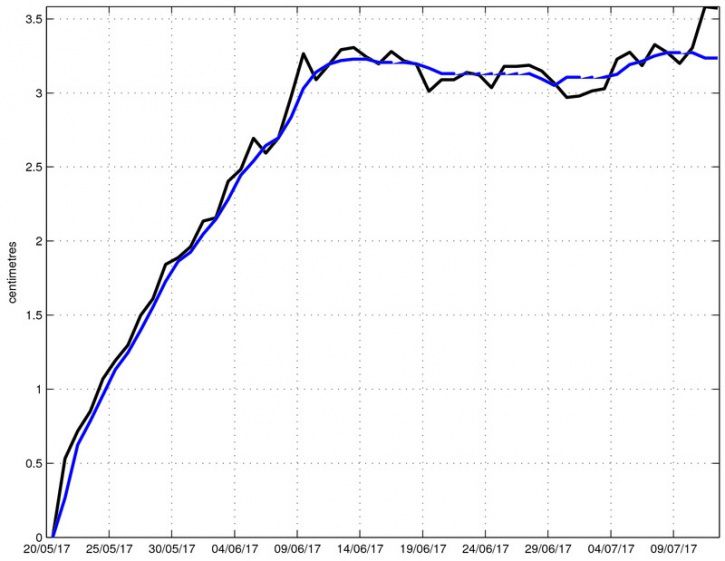 Piton de La Fournaise - 13.07.2017 - Illustration of the deformation since May 20, 2017 (following the last injection of magma towards the surface). Here is shown a baseline (distance between two GPS receivers) crossing the Dolomieu crater from north to south (in black the raw data, in blue the smoothed data over a week). A rise is synonymous with elongation and therefore swelling of the volcano; Conversely a decrease is synonymous with contraction and thus of deflation of the volcano. (© OVPF / IPGP) 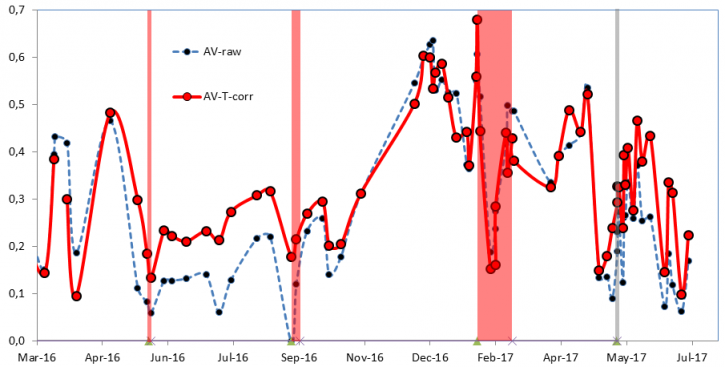 On July 13, at 10:10 pm, the seismicity increased markedly, and since 22:30, a seismic crisis accompanied by a rapid deformation are recorded ... the magma rises towards the surface. The prefect triggers alert 1: "Probable or imminent eruption" of the ORSEC Volcan plan.

At 0:50 local on July 14, one (or some) eruptive crack(s) open on the southern flank of Piton de La Fournaise. The volcano makes its fireworks for the French National Day. The prefecture raised the alert to level 2-2.
The eruptive crack emits two distinct lava flows.