An ash eruption began this 18 August around 6:30 am local time at the San Cristobal volcano, the highest volcano in Nicaragua, and continued during the day.
No rumblings or explosions were reported. The likely hydrothermal or phreatic episode began with a large degassing.
Many communities have been impacted by ash falls, which have mainly affected the communities of La Grecia, Las Hamacas, Ranchería, La Joya and Mocorón.
It was recalled the precautionary measures applicable in case of ash falls; The population is prepared in case of warning, following the multi-threat prevention exercise organized by the authorities in May. Over the past few hours, the OVFGO has recorded an increase in the explosive activity of Fuego;

An average of 10 explosions per hour, low to moderate, generate plumes reaching 4,600 m. asl before traveling 10 km to the west and southwest.
Two lava fountains, reaching 100-150 meters above the crater, feed a lava flow, 900 meters long in the Cenizas barranca, and produce incandescent falls of material over a distance of 200 meters. 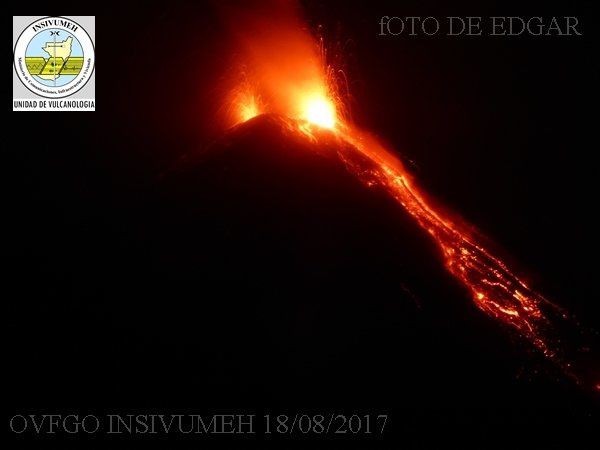 Also in Guatemala, the activity of Pacaya has, following the eruptive activity since the 11th of this month, changed in the Mackenney crater, about 15 meters deep. Strombolian explosions at intervals between 5 and 10 minutes, are accompanied by projections at 50-75 meters above the crater, and falling predominantly into the crater.
The OVPAC observatory reports low to moderate fallout, and noises similar to a train locomotive.

Tropical storm Harvey is expected to bring a lot of rain in the next few hours, and likely increase risks of lahars. A photo taken on 17.08.2017 by the satellite Sentinel tells us about the situation in Erta Ale, where the lava flows develop.
The flow has increased by nearly 2,000 meters on the northeast side, the lava flows being essentially through tubes, with some surface effusions.
On the south-west side, the flows have not really progressed, but have widened.
The lava originates from the new lava lake located off caldera.