An explosive eruption began on August 7 at 6 pm UTC / 10h AKDT at Bogoslof; It continued for 3 hours according to seismic, infrasonic and satellite data. Since then, monitoring systems have noted that activity has declined, but is still above base level.
The satellite images show a continuous plume attached to the volcano, and carried by strong winds in a southerly direction towards Umnak Island and the Pacific. A pilot saw the volcanic cloud at 9,750 meters above sea level.
This eruption is the longest of the many sequences begun in December 2016.
The aviation alert level is red, and the volcanic alert is Warning. Since 6 August, the Turrialba has sporadically eruptive outbreaks, accompanied by short-lived ash emissions.
On the 7th of August, from the beginning of the morning, a strong smell of sulfur is perceived in Heredia, Alajuela, San José and Goicoechea.

At 0:30 and 9:20 local eruptions caused the emission of a plume of ash at 400-500 meters above the crater, drifting towards the northeast. Moreover, since 6hlocale, sporadic emissions of ash of a short duration are observed. Falling ashes are reported on San Rafael de Coronado, Barva y Heredia.

The Ovsicori has posted a video showing the evolution of the Turrialba crater since 2013.

At the Reventador / Ecuador, an important and continuous eruptive activity is maintained, characterized by explosions generating plumes of ash rising more than 500 meters, and the expulsion of incandescent blocks impacting the flanks of the volcano.

The seismicity of 7 August is marked by three episodes of harmonic tremor, five episodes of emission tremor, 29 LP earthquakes and 35 explosions. During the evening and on the night of August 6, emissions of steam, gas and ash were observed, some exceeding 500 meters above the crater. On August 7, cloudiness masked the volcano.
Source: IGEPN Reventador - a photo taken on 21 July by Marco Almeida shows the lava flows from 23 June to 1 July. - Doc. IG

The explosive activity has increased in recent hours in the Fuego, with plumes of ashes reaching the height of 4,900 m. asl, before drifting to a western sector. Ash falls are reported on San Pedr Yepocapa and Sangre de Christo.
Lava flows are observed towards Barranca Ceniza, 1,300 meters long, and the barrier Santa Teresa, 700 meters long.
Falls of ballistic materials are recorded more than 200 meters from the crater causing small avalanches. 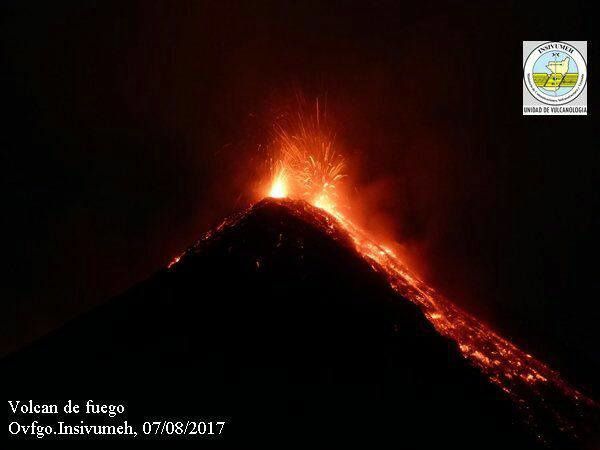