La Réunion - 10 The eruptions of La Fournaise outside Enclos Fouqué Piton de La Fournaise - 1776 lava flow , on the seafront - prismation during the cooling of these thick lava flow, then exposed by erosion - .- photo © Bernard Duyck / June 2017

Most eruptions outside Enclos are located along the axis of weakness / rifts northeast (axis of Sainte Rose) and south-east (axis of Saint Philippe - Pointe de la Table).
Characterized by the opening of cracks of several kilometers long, often located in the alignment of points of exit located in the Enclos, they are also by the emission of very fluid lava; they have a high flow rate and a low explosiveness.
Less than a dozen of these events have occurred since the human settlement in Reunion Island. 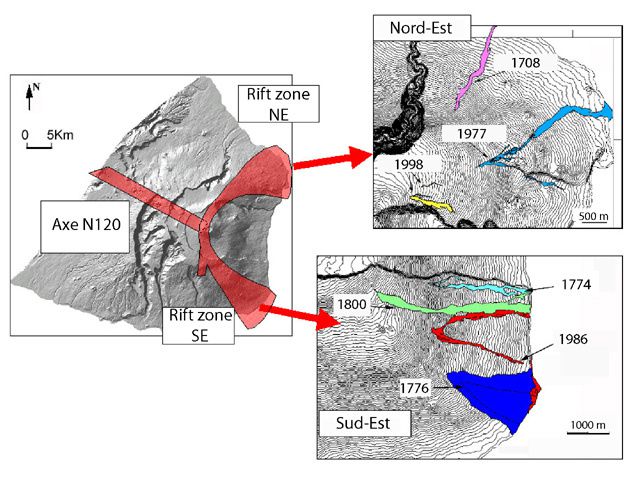 On the left, the main axes of weakness - on the right, the eruptions outside the Enclosure on the Rift NE area, above, and SE, below - Doc. N.Villeneuve / P.Bachèlery. Piton de la Fournaise - Casting of 1776 - prismation during the cooling of these thick lava flow, then exposed by erosion - .- photo © Bernard Duyck / June 2017

Two eruptions took place on the northeast flank in 1708 and 1977, four on the southeast flank in 1774, 1776, 1800, and 1986. Three other, undated and seemingly recent, eruptions occurred in the southeast, in the gully of Ango and Basse Vallée, or to the north-east, called the effusion of Bois-Blanc.
These activities, emitting flows pouring into the ocean, contribute to the extension of the island in the prolongation of the rifts.
The eruption of 1776 built a heading of 400 meters wide and 4,000 meters long beyond the ancient shore. Initiated by erosion, it forms the Pointe de La Table. She becomes larger after the eruption in March 1986. On 20 March 1986, a 700-meter fracture opens above Piton Takamaka at an altitude of 1,000 meters. Lava fountains and phreato-magmatic explosions are observed. Two lava arms bypass the Piton Takamaka. The cracked area progresses downward in the following days, and cuts the RN2. On March 24, effusive activity below the road grew and pahoehoe lava cascaded into the ocean. At its stop at the end of March, 5 million m³ of lava emitted built a platform that enlarged the island by 30 hectares. On the northeast rift, the eruption of March 1977 began with the opening of fissures in the Enclos, and then from April 5, a series of cracks opened outside the Enclos, on the heights of Sainte Rose. Two lava streams a'a emanate, one towards the Rempart de Bois-Blanc, the other towards Piton Sainte Rose by destroying a part of the village. On April 13, a new incursion of the lava into the village damaged the church Notre-Dame des Laves, surrounded it, burned its gate but penetrated just a little ... it continues towards the ocean. Sources:
- In the heart of La Fournaise - by Roland Bénard and Maurice Krafft - ed. Nourault / Bénard
- Cybergeo - Review of the typology of eruptions of Piton de La Fournaise, volcanic processes and associated risks - by N.Villeneuve and P.Bachèlery / 2006.