Arlempdes (pronounced Arlandes), commune of the Haute-Loire, in the Auvergne region / France, is known mainly for its eponymous castle seated on a volcanic dyke ... its village is classified among the prettiest villages of France, cashed at the bottom of the valley of the Loire, about thirty kilometers from its sources, under the Mount Gerbier de Jonc.
The landscape is dominated by basaltic flows, sometimes ornamented with organs, which earned its name: in Celtic, the region is called "valley of the scree", presumably in reference to these collapsed volcanic organs, and fractured in hundreds of pieces. Arlempdes - on the left, overlooking the basaltic wall, the ruins of the castle; on the right, the chapel of Saint-Jacques, in red tuff - photo © Michel Lecouteur / 2017

Dyke-producing volcanism should be related to that of the Puy basin and to the basaltic volcanoes of Devès, which affected the area between the Loire and the Allier, from the upper Pliocene (around 3 Ma) to the beginning of the Middle Pleistocene , 6 Ma). Age in Ma of the main volcanic complexes of the French Massif Central - Modified after Maury and Varet, 1980 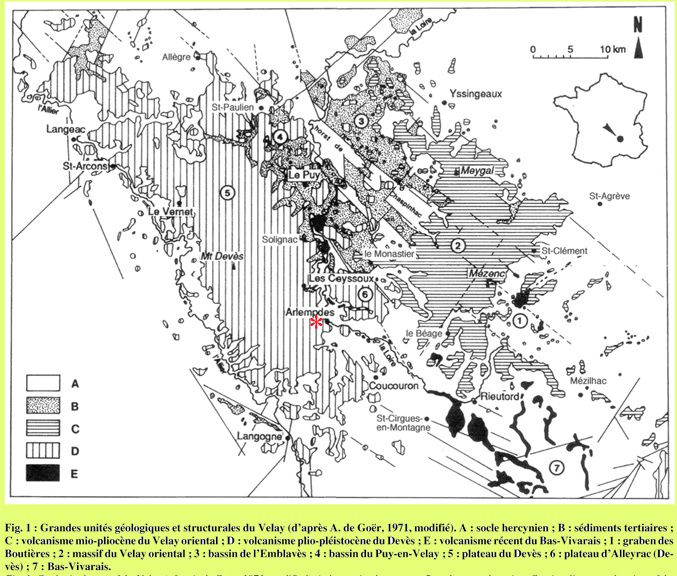 Plio-quaternary evolution of the Puy basin - the location of Arlempdes: red star. - according to A. de Goër

The basaltic plateau of Devès covers 600 square kilometers. Volcanism is basically fissural and strombolian, with more than 230 slag cones, or remains of former eruptive mouths called "guards" in the region, and 58 maars, craters of phreatomagmatic explosions. The slag cones are formed of olivine basalt and ankaramite with numerous spinel lherzolite nodules, torn from the upper mantle, 40-50 kilometers deep.
The northeastern margin of this plateau covers the sedimentary filling of the Puy-en-Velay graben; filling which consists of two very different sequences: a lower sequence, sandstone then marno-limestone, paleogene and a higher sequence, fluvio-lacustre, villafranchienne. The latter recorded the beginning of the basaltic eruptions of Devès.
The spreading of the castings forming the plateau hides the structuring of the substrate; nevertheless, the alignments formed by the slag cones, the orientations of the dykes (N140 to N160) and the evidences of eruptive cracks, show the synchronous distension and fracturing of volcanism. The numerous geochronological datations on the whole plateau show statistically two net eruptive paroxysms at 1 and 2 Ma; the duration of the eruptive events in this set does not exceed 3 Ma.
(Volcanoes of the Massif Central, Pierre NEHLIG et al., August 2003) 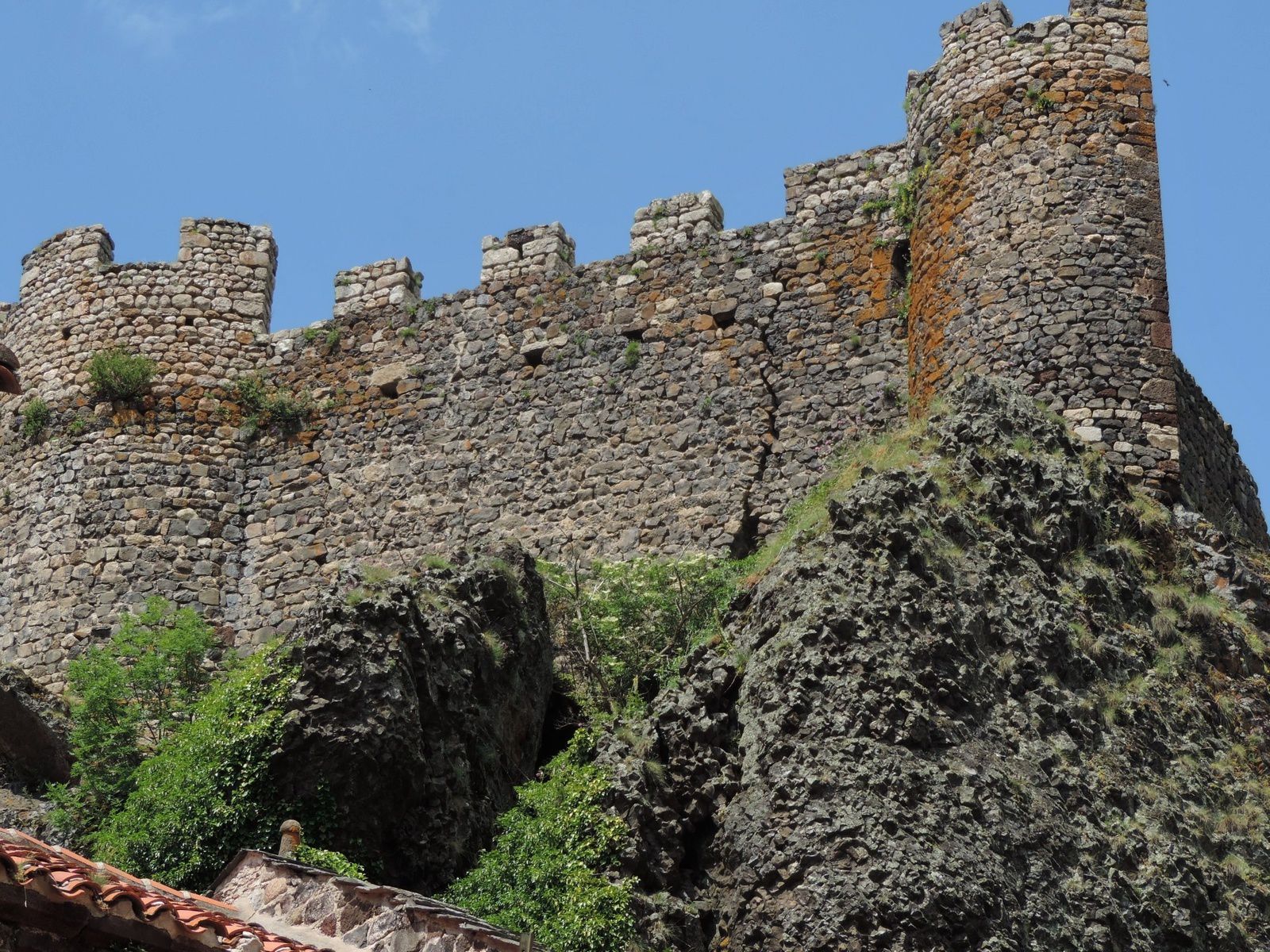 The site dominates a loop of the Loire and serves as a "lock" between several valleys. This is what has earned it its choice, since antiquity, as a military and religious site.
The Romans set up a camp on a nearby hill in the time of the Gaulish War, in the 1st century BC : le Camp d'Antoune, partially bordered by basaltic cliffs.
In the Middle Ages, the Arlempdes dyke is inhabited. The chapel of Saint-Jacques, built in red tuff, dates from the 12th century, but was built on an older building. The castle is built from the 13th to the 16th century, with many modifications, adapting to the morphology of the dyke; its ramparts are naturally extended by the volcanic rock, and its ascent is almost impossible.
Until the 16th century, it was possessed by various local lords, including the family of Monlaur, powerful in the south of Auvergne. He passed through marriage to Diane de Poitiers, who had the seigniorial dwelling built. The fortress then served as a garrison for the royal troops, under the direction of local lords, among whom are found in the 18th century the family Goÿs de Mézeyrac. Lost its strategic interest, it is abandoned, falls into ruins and serves as a career to the locals.
In 1963, an association, gathering descendants of Goÿs de Mézeyrac and enthusiasts, redeemed the ruin and began to restore it.

Sources:
- Thanks to Michel Lecouteur for sharing his recent photos.
- The Plio-Quaternary evolution of the Puy basin (Massif Central, France) morphosedimentary rhythms and volcanism - by E. Defive, A. Gauthier and JF. Pastre.
- Guide to volcanoes in Europe and the Canaries - M.Krafft & F.D.de Larouzière - ed. Delachaux and Niestlé
- BRGM - The volcanoes of the Massif Central - by P. Nehlig & al.
- Massif du Mezenc Gerbier, and surrounding areas - by Alexandre Aubry