To the east of the Devès Plateau, there is a very rugged volcanic set, whose volcanic activity is almost totally dated from the Miocene, between 14 and 6 Ma. Originally there are 14-13 Ma, a few flows of porphyry basalt and domes of trachyte and phonolite are set up in the basin of the Emblavès (3, on the map).
Towards 12-11 Ma, mainly phonolytic volcanism extends to the region of Lizieux-Meygal (north of the eastern Velay - 2 on the map).
Between 10 and 8 Ma, the plateau of Mézenc is built: flowing flows spread out and stack "like pancakes", composition evolving from basalts to trachandesites.
The activity ends between 7.5 and 6 Ma by the construction of some domes of trachyte and the installation of about fifty "sucs" and domes-flow of phonolite, illustrated by the best known, Mézenc and Gerbier-de-Jonc. In local dialect, "a suc" defines a rocky and acute summit, volcanic or not.
In the case of "a volcanic suc", one speaks of pelean volcanism; the viscous and very thick lavas are very rapidly frozen when they reach the surface and give, in cooling, the characteristic forms which are observed today. They characterize the landscape of the Ardéchoise mountain and constitute a set of unique volcanic formations.
Very different from the volcanoes with explosive craters of Auvergne, these phonolithic (*) sucs exhibit a remarkable state of preservation. Their presence is linked to the alpine uprising. Indeed, the backlash of the formation of the Alps has led to a significant rise in this area of ​​the Massif Central whose granite base has fractured. The magma then infiltrated by the fractures of the base and its rise was made in several stages and small magmatic chambers.
The emitted lavas, most often of very viscous consistency, have thus formed true domes. The Mount Gerbier de Jonc is famous for various reasons: its original shape and height, 1551 meters, make it stand out from the landscape.
The rich and wild nature in the vicinity justifies its protection, because it shelters, besides a fauna and a flora of great interest, the sources of the longest French river, the Loire.
Its strange name is in no way linked to a bundle of rushes ... it must be linked to a pre-Celtic etymology: gerbier corresponds to gar, meaning rock (root found in Gers), and rush to jugum, corresponding to mountain.
This protuberance is dated from 8 million years ago, and is due to an extrusion of phonolite with nepheline, containing conspicuous crystals of sanidine and augite needles.
Its upper part is roughly prismed, while the base is hidden by screes accumulated during a glaciation. A basaltic lava flow rests on the crystalline basement. The sources of the Loire, with the Gerbier de Jonc in the background - photo Hiking in the Ardèche countryside.

(*) Phonolite is a scanty volcanic rock, encountered mainly in the form of flows or intrusions forming domes. Its silica content is variable but generally between 51 and 61% by weight. ; its alkali content (Na2O + K2O) is high, often greater than 10% wt.
It takes its name from the high-pitched sound that is produced when hitting a piece with a hammer. It consists mainly of alkaline felspar and feldspathoids, with phenocrysts e.a. of clonopyroxene and amphibole, never quartz.
It is cut into slabs, called lauzes in the region. These flat stones have an important surface in relation to the thickness, and require a very solid framework, to which they are hung by a hole to wooden pegs. All the lauzes are not in phonolites, but also in schist, limestone, gneiss or basalt. 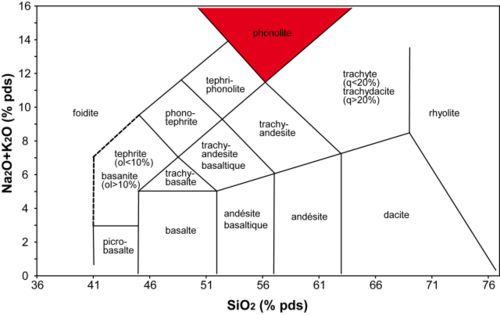