At Agung, the situation does not change substantially; the plumes of ashes stood yesterday between 2,000-2,500 meters above the summit, and nocturnal glow was observed.

On the morning of December 12, we observe a dark ash plume around 7 am local, rising to 1,500 meters above the summit Lahar of remobilization of ashes by the rains on 11.12.2017 in the area of ​​Muncan - scale give by a man standing on the wall - photo Bali volcano eruption Agung 2017

At Kanlaon, the number of volcanic earthquakes decreased in 48 hours; they go from 155 episodes to 14.

The building still has a slight inflation. 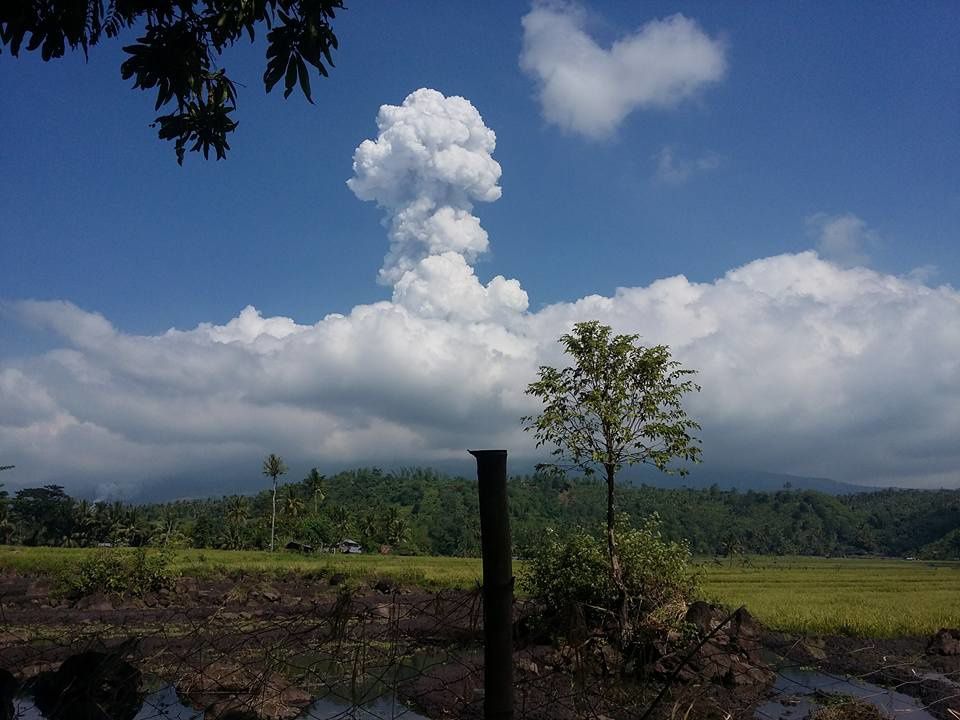 Constant explosions are moderate, but the ash plume remains high, at around 5,000 meters asl, causing ash falls on villages on the southern flank.

The lava fountain only reaches 150 meters above the crater; it feeds the lava flow of the Barranca Seca, where it is waiting 1,000 meters. At the Reventador, the activity remains high, without variations of the parameters.

On the morning of December 11th, the IG informs of an emission of ash to 600 meters above the rim of the crater, with dispersion towards the northwest.

Beautiful photos of the day and night activity of the Reventador have been posted by Martin Rietze ... to see on the facebook page "volcanoes and volcanism" - link Explosive eruptive activity has continued in Nevados de Chillan since 7 December, characterized by sporadic ash emissions, phreatic explosions and the presence of a solfatara, which could have a role in the dynamics of the volcano. Activity of Nevados de Chillan between 7 and 11.12.2017 - notice the sulfur field to the left of the photo - doc.Sernageomin

At Sabancaya, the number of explosions was decreasing last week; the volcano has a deflationary tendency and a sulfur dioxide flux considered moderate, with 1,392 tons / day.

The eruptive plumes remained at a height similar to the previous week, about 3,000 meters above the crater, and a 50-kilometer spread mainly in NE and SW directions.