Nighttime glow is observed at the crater of Agung.
Activity seems to have lost intensity, with a gradual decline in ash emissions, and a shutdown on November 30. These signs are consistent with an "open" system. Continuous tremor is also recorded, with amplitude above baseline and saturation of seismographs by period since November 28; it shows a great activity close to the surface.

The volcano's breaths are noted in the measurements: the meters show inflation before eruption and deflation after it. The laboratory tests on the ashes emitted during the November 21, 2017 eruption show the presence of juvenile contents, and affirm the phreatomagmatic nature of the first eruption.
The effusion of lava produced next is estimated at a volume of 20 million cubic meters, one third of the total volume of the crater.
The activity is therefore always high, and the alert status remains at the maximum level, with a prohibited areas at 8-10 km.

The first images of the Sentinel 5P satellite / TROPOMI multispectral instrumentation were presented by ESA; a good image of the sulfur dioxide of the eruption that occurred on November 27th was released during this presentation. 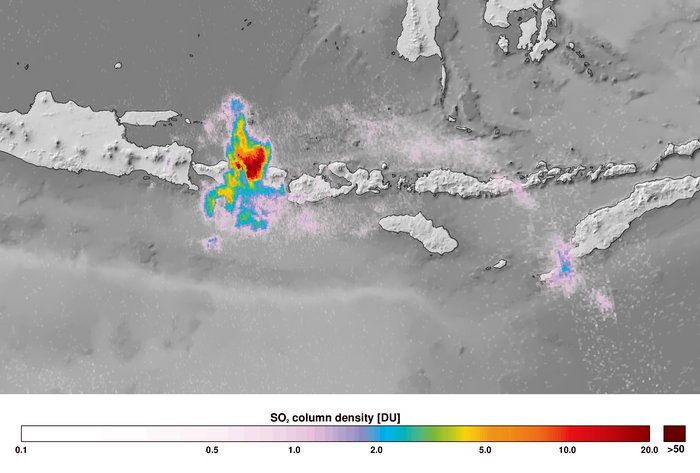 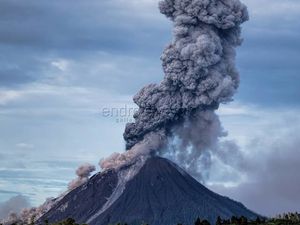 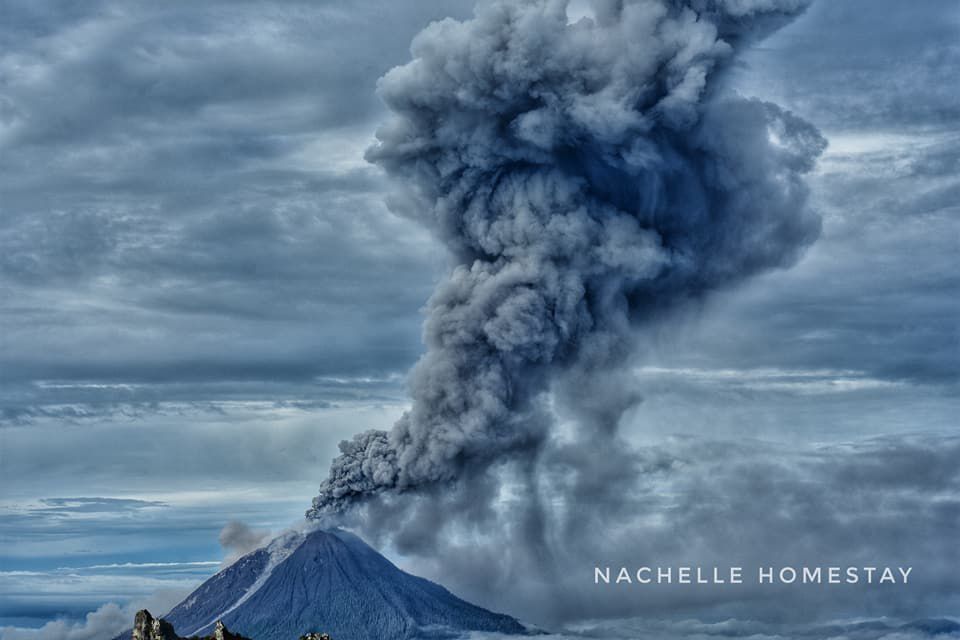 In Villarica, the second half of November was marked by lava spatters (salpicaduras) throughout the crater perimeter, oscillations in the crater floor level, associated with migration and changes in the diameter of the active pit.

A fine sample of reticulitis, heavily vesiculated basaltic pumice, was recovered on November 28 at the top of the volcano; this foam, whose porosity is greater than 98%, is considered the lightest volcanic rock on the planet.
Villarica's detailed activity report is expected by POVI 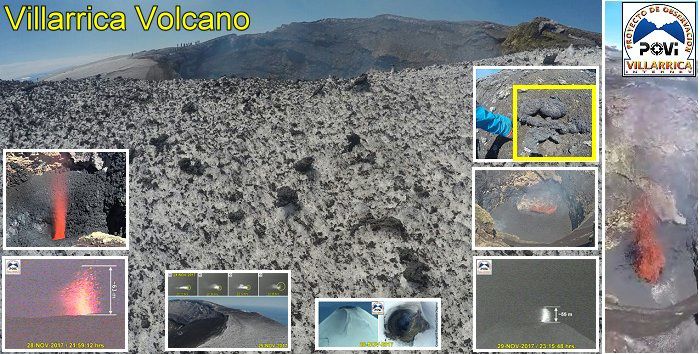 Summary in photos of the activity of Villarica in 2nd half of November - Doc POVI / W.Keller The monthly activity report of the Piton de la Fournaise is listed below:

Seismicity: In November 2017, the OVPF recorded a total of 23 superficial volcano-tectonic earthquakes (0 to 2 km deep) beneath the summit craters;
3 deep earthquakes (> 2 km deep);
317 collapses (in the Crater Dolomieu, at the level of the Enclos Fouqué ramparts as well as at the eruptive site of July / August 2017);
43 local earthquakes (under the island, Piton des Neiges side);
6 regional earthquakes (in the Indian Ocean area).
Deformation: Following the recovery phase of inflation (swelling) of the volcano in mid-October, the deformations again stopped in November, showing no particular signals.
Geochemistry of gases:
- CO2 concentrations in soil at distal sites (Plains region): the trend measured in November is consistent with the long-term decline since June (second-order fluctuations are probably associated with rainfall).
- CO2 concentrations in the soil at the level of the volcano deposit: intermediate concentrations.
- Top emissions from the Piton de la Fournaise: persistence of low concentrations of H2S and sometimes SO2 in the air at the top of the volcano. 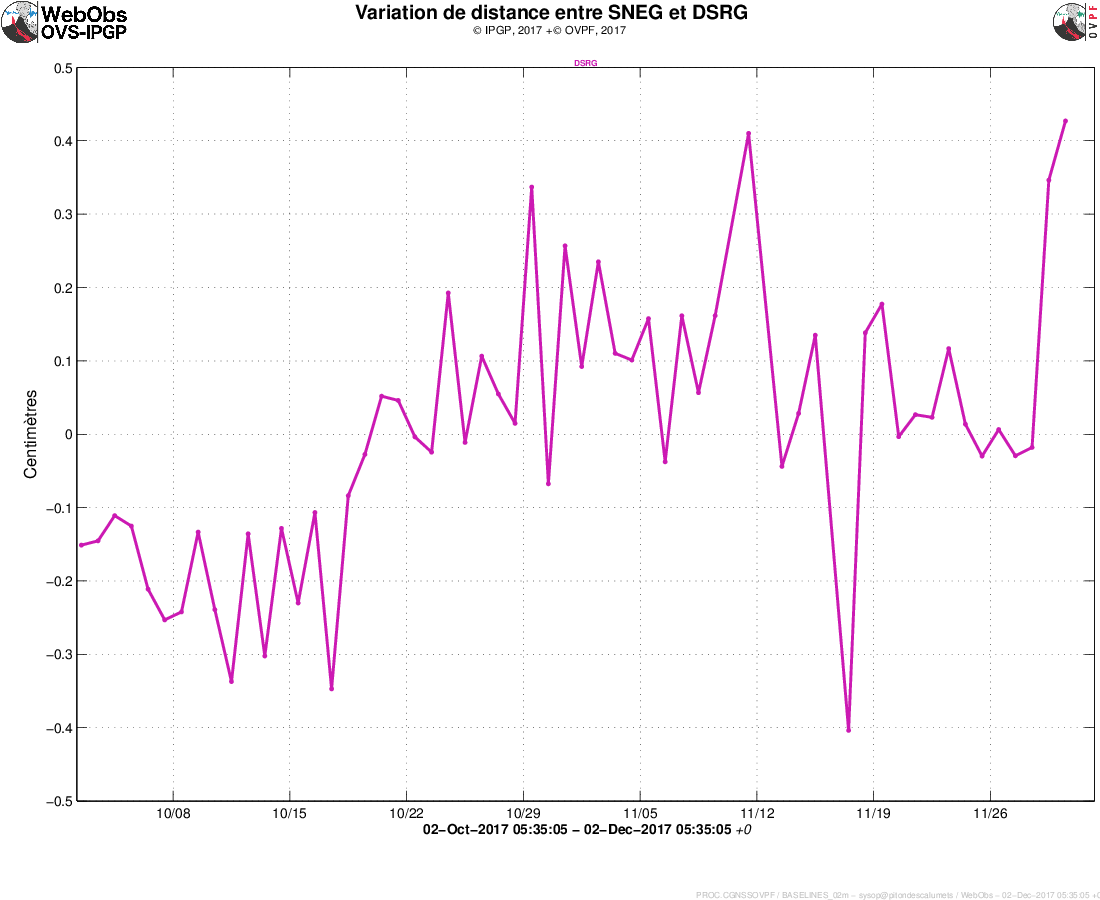 Piton de La Fournaise - Illustration of the summit deformation over 2 months. Here is shown a baseline (variation of distance between two GPS receivers) crossing the crater Dolomieu (see location). A rise is synonymous with elongation and therefore swelling of the volcano; conversely, a decrease is synonymous with contraction and therefore deflation of the volcano. Any periods colored in light pink correspond to eruptions. - 02.10.2017 / 02.12.2017 - OVPF