At various times, and often unsuccessfully, the man attacked the lava flows that threatened him.

Whether at Eldfell in Iceland, at Etna in Sicily, or at Mauna Loa on Hawaii, tenacity paid off.

On November 21, 1935, an eruption begins in the summit caldera of Mauna Loa, on Big Island / Hawaii. Soon she will migrate to the Northeast Rift Zone.

On November 27, a new vent opens on the northern flank of the volcano, well outside the rift zone; it produces pahoehoe lava flows in the saddle separating Mauna Loa from Mauna Kea.

The lava flows will then head east and the city of Hilo, progressing a mile a day ... the city is threatened, and will be reached mid-January if nothing is done ! On December 23, 1935, fearing that the lava flow would reach the headwaters of the Wailuku River, which supplies water to the town of Hilo, Thomas Jaggar, Director of the Hawaiian Volcanological Observatory, called the services of the Army of the air based on O'ahu Island.

He asks the army to bomb the lava flow because he hopes to destroy the lava tunnels or the supply channels of the lava; Lieutenant-Colonel George S. Patton (the future famous General Patton during the Second World War) is responsible for overseeing this operation.

On Dec. 26, six Keystone B-3A bombers and four LB-6 light bombers, from 23rd and 72nd US Air Force bombers, based in Pearl Harbor, were deployed from Luke Field to Hilo.

During a first flight, three Keystone B-3A bombers and two LB-6 light bombers take off. A second flight was planned for the afternoon. They will drop twenty bombs of 300 kilos on the targets this December 27th.

Five of the 20 dropped bombs hit the molten lava directly, most of the others impact solidified lava along the channeled flow, making craters 6 meters in diameter and 2 meters deep on average. Colonel W.C.Capp, a pilot who bombarded the lower target, reported direct impacts on the flow channel, and the observation of a "red molten rock sheet" projected at an altitude of 200 meters, and debris having made small holes in the lower wing (of its biplane).

Several bombs collapsed the thin roof of the lava tunnels, although under no circumstances were there sufficient roof breakage materials to cause tunnel blockage, according to other pilots.

Exactly six days later, the eruption stops ... Jaggar is convinced that the operation is a success, and airmen are considered heroes. 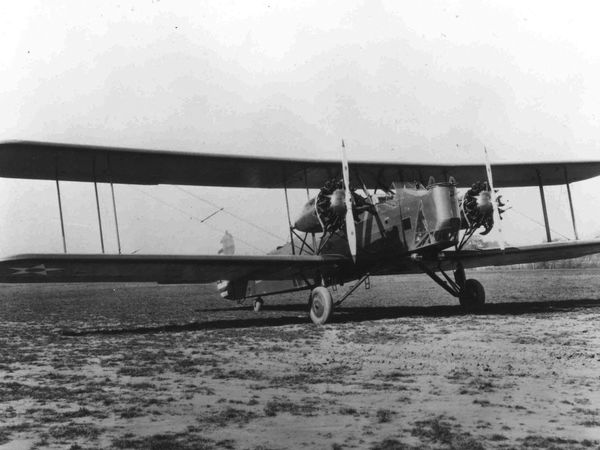 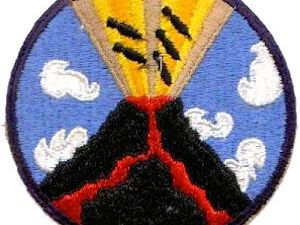 A USAF Keystone B-3A bomber - the cockpit of a Keystone LB-6 & the HighFlight VolcanoBombing badge - The 23rd bomb squadron patch, in memory of this bombing - a click to enlarge Detonation of a bomb at Mauno Loa during the bombardment of the source of the lava flow on December 27, 1935 (located at a height of 2,590 m) - Photo by Army Air Corps, 11th Photo Section. PC: USGS

The controversy and the legend:

The pilots were honored for saving Hilo, but were found cursed for deceiving the goddess Pelé.

Two of the bombers crash on landing at Luke Field. The pilots will survive the incident. A month later, on January 24, 1936, two planes exploded over O'ahu, following a collision in flight. Six of the eight airmen were killed. They are identified as pilots of the volcano bombing mission. Hawaiians are convinced that they have been angered by the goddess Pelé.

The success of the bombing mission is denied by USGS geologist Harold Stearns, who is responsible for mapping and water resources for the Maui volcanoes. Having learned about the Mauna Loa bombing project, he wanted to fly with the army.

He then questions Jaggar about the effectiveness of the operation: according to him, the lava is located too low, and there would have been no effect following the bombing. The possibility of stemming seems effective, but the target too small.

Jaggar replies that the examination of the source of the flow shows that the canal was broken by the bombing, and the flow of the lava deviated ; the movement of the lava front slowed, advancing only about 300 meters per day during the five days following the bombing.

Whether it is Jaggar who is right, or the other hypothesis prevails, is it not important that Hilo has been spared ? ... and that Pele's will be done.