News from Agung, Poas and Turrialba. An update on Agung's activity thanks to information from PVMBG and BNPB.

During the past month, the frequency of eruptive incidents has decreased according to the observations, the last eruption is reported by the observatory on January 24, 2018.

The volume of the lava dome has not changed significantly, and is still estimated at 20 million cubic meters, or 1/3 of the empty volume of the crater.

Inflation is still observed, but characterized by a lower ratio, indicating that pressurization following magmatic movements is less significant.

Measurement of magmatic gases still indicates the existence of deep magma movement dynamics, while magmatic carbon dioxide concentrations are lower than those measured before the November 2017 eruption. The sulfur dioxide flux is relatively low, either due to the dissolution of the gases in the water, or due to a smaller surface diet. The CO2 / SO2 ratio, which reflects the intensity of magmatic activity, shows a downward trend compared to November 2017.

The volume of magma circulating inside the volcano is currently less than one million m³, 40 times lower than in September-November 2017, where it was estimated at 40 million m² ... which implies a decrease the opportunity of major eruptions.

The satellite data show a decrease in the thermal energy of the crater, and confirm a decrease in the ratio of lava flow to the surface. The dome surface hardens, with a potential for increased pressure, followed by strombolian eruption as occurred on January 19, 2018. 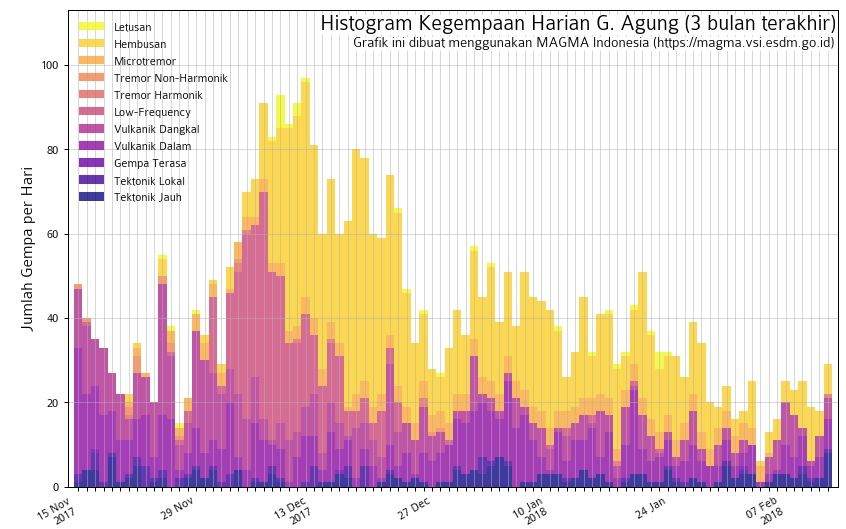 On the basis of these multiple parameters, the PVMBG concludes that Agung volcanic activity is still high and unstabilized, with the possibility of an eruption at any time.

However, the alert level was lowered on February 10 from level IV / Awas to level III / Siaga, with a 4 km radius hazard zone. There are still more than 15,000 displaced people, despite the authorized returns. 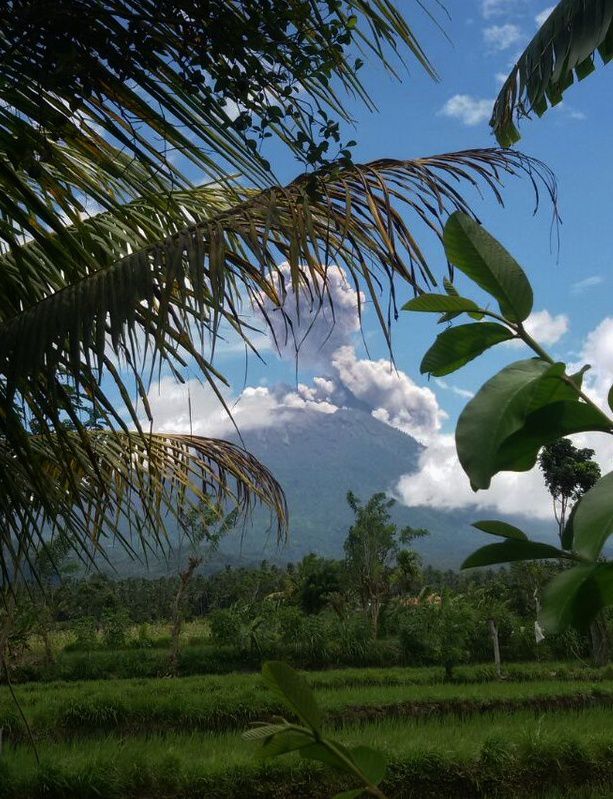 According to E.Duarte, a volcanologist of Ovsicori, the acidic lake of Poas, measured at a pH between 0 and 1, reached a depth of maximum 15 meters, since according to his observations, he covers and will disintegrate the "red cone" visible in September 2017. Its temperature in the hottest areas is 97 ° C, and accompanied by sound emissions of steam and gas. On its edges, bubbles of sulfur are formed in abundance.

Duarte finds a balance between energy, temperature and pressure; which gives an aspect of calm comparable to that which he possessed before the eruptive cycle which began a little before the holy week in 2017. 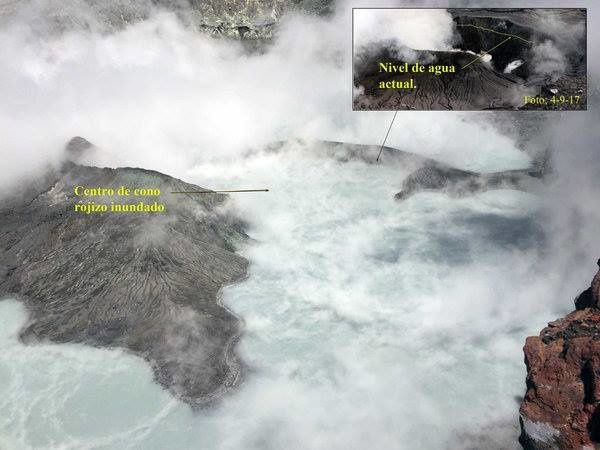 The acidic lake of Poas has dried up in the past several times: in 1989, where it filled up after six weeks; in 1994, after which it lasted 23 years, reaching its greatest depth with 36 meters. The presence of the ancient dome made it a long barrier, preventing it from filling the crater in the rainy season.

After the eruption of 2017, the waters took nine months to cover the bottom of the crater. The crater of Turrialba under the passive emissions of ash on 12.02.2018, during a visit of the teams of the RSN - Photographs of Jean Paul Calvo and Alexandre Argüello.

At Turrialba, the RSN teams visited the crater on 12 February for monitoring and maintenance works. The passive ash emissions of the last days had covered the solar panels supplying electronics, as well as the internal walls of the crater and the vegetation. The crater of Turrialba and the vegetation under the passive emissions of ash on 12.02.2018, during a visit of the teams of the RSN - Photographs of Jean Paul Calvo and Alexandre Argüello. - a click to enlarge