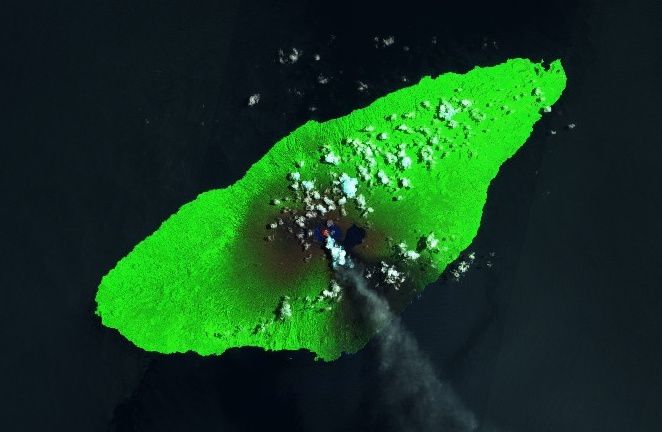 The Vanuatu Meteorology And Geohazards dept. raised the Ambae alert level from level 2 to level 3, with an extension of the forbidden zone at 3 km radius around the active vent in Lake Voui, on March 18 at 22:25.

To note, a thermal anomaly of 60 MW was detected by Mirova on March 16th. In Costa Rica, Poas has a permanent degassing of low-temperature gas and water vapor directly emitted into the atmosphere and dissipated to the southwest, since the acidic lake completely dried up.

The seismicity is at a low level, corresponding to a low-energy hydrothermal fumarolic activity. The acid lake of Irazu shows a tendency to increase in volume; the crater lake showed color changes (varying between turquoise, green and blue), indicating different processes of interaction of water with rock and microbiological activity taking place in this system. The milky hue shows the presence of colloidal particles in suspension. Turrialba continues to passively emit a large magmatic gas stream at high temperatures (600-800 ° C) from a volatile-rich magma body, suggesting that the volcanic system is sufficiently open to favor the passage of the material and heat to the surface, which is confirmed by the seismicity of the last three days characterized by discrete LP earthquakes and tremor of short duration and low amplitude.

The heat flux of this shallow magma warms the surrounding rock of the volcanic vents and produces a noticeable incandescence at night inside the western crater.

The trend of increasing SO2 and PM10 concentrations between February and March may be the result of a combination of factors such as an increase in the flow of gas and volcanic particles due to magma injection at higher levels. superficial rainfall and reduced precipitation during the dry season. These gases and aerosols are scattered over a region between Cartago and San José.