On March 16th, the JMA confirms a type of tremor associated with underground magmatic activity.

An area of ​​1 km around the crater could be affected by bombs in case of eruption. Satsuma-Iojima - Iwodake Dome is the highest point on the island; the smaller and lush green Inamuradake cone is located on the right of the photo - Doc. Kyodo news

Satsuma-Iojima forms part of the edge of the largely submerged Kikai caldera, 19 km wide, and located at the northern end of the Ryuku volcanic arc, south of Kyushu Island / Japan.

The historical eruptions of the 20th century have mainly concerned Iwodake, which is marked by a fumarolic activity of high temperature (up to 900 ° C).

The summit zone, of 400 over 140 meters, includes several craters, result of the explosive activity following the installation of the dome. The small crater Kintsuba is located southwest of the central crater Oana, a place of mining sulfur . Small ash eruptions were observed in 1999, 2001, 2002-2204, and 2013. 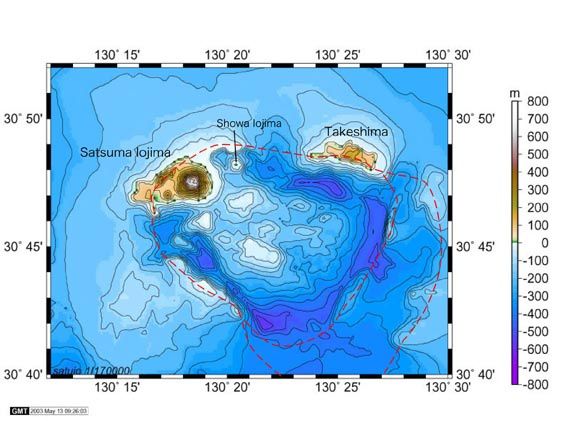 Bathymetry of the Kikai Caldera - Satsuma-Iojima Island is located on the edge of the Kikai caldera, largely submerged (red dotted) - Doc. Geological Survey of Japan / GVP The activity of the Reventador seems to increase in power. The IGEPN reports the observation of a plume of steam and ash rising to a height of 600 meters, on March 18 at 8:57 local / 11:57 UTC

During the night, the incandescence in the crater is accompanied by fall of blocks on the flanks of the volcano on 800 meters.

At the seismicity level, 31 LP earthquakes, 25 explosion-related earthquakes, 15 tremor of emissio and 7 harmonic tremor episodes were recorded for the period from 18.03 / 11h to 19.03 / 11h. Other parameters are reported without changes. 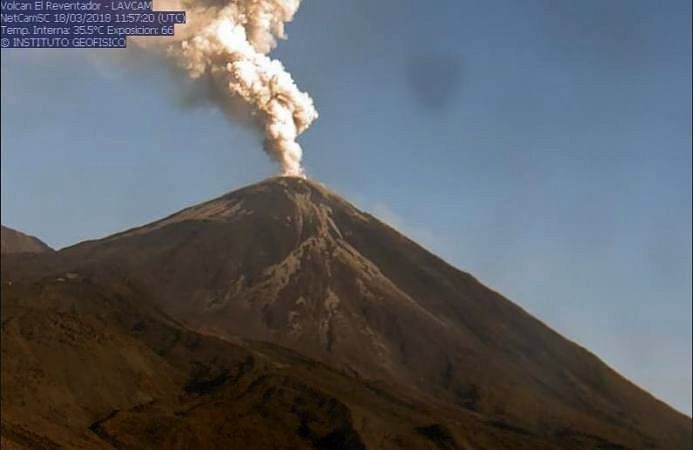 The Gunung Sundoro, located with its neighbor Gunung Sumbing, in the center of the island of Java, has since March 18 in the morning a small white plume of steam and gas.

Although its level remains "green / normal", the approach of the crater is prohibited.

Its historical eruptions are generally of phreatic type. The last data of 1971. 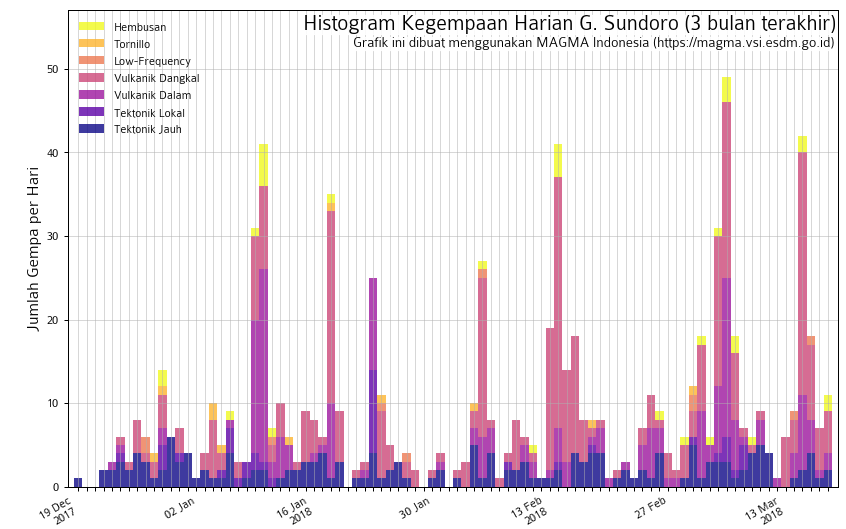 Sufficiently rare to talk about, the Steamboat Geyser erupted on March 15, 2018, at 5:37 pm. This eruption was recorded by the seismic network and temperature taking. The roads being closed, the observation of the episode remained confidential.

Nearby trees were covered with mud; National Park staff took pictures the next day of rock fragments ejected during this episode. Located at the eastern end of the Norris Basin in Yellowstone National Park, it is known as the largest active geyser; it rarely has major eruptions, but they are powerful when they occur, propelling hot water columns up to over a hundred meters, followed by a vapor phase that can last longer than one day.

The YVO points out, to the attention of the sensational news carriers, that the volcano is not about to erupt.