In Hawaii, the eruption continues in Leilani Estates, and the lower East rift zone of Kilauea .

On May 6, activity was concentrated on the southwestern portion of the zone, with a north-trending flow from fissure # 8, covering   with lava houses and gardens, to the provisional number of 21 properties.

A thought for Mick Kalber (journalist and photographer at Tropical Visons video, and his wife Ann, who live in Leilani Estates and had to evacuate this weekend. Kilauea Lower East rift zone - on these photos from 06.05.2018 have seen the progression of the lava flow - photos Bruce Omori / Paradise helicopters Progression of the lava between the two thermal photos of 05.05.18 / 10.45 and 06.05.18 / 2.30 pm - The temperature in the thermal image is displayed as grayscale values, the brightest pixels indicating the areas the warmer (the white shows the active breaks). - Doc. USGS / Digital Globe

On May 7, two new fissures segments broke the ground. Fissure # 11 opened in a treed area around 9.30am southwest of Leilani Estates, and was active for only three hours.

The west end of fissure 10 degassed strongly during the afternoon.

Fractures on Highway 130 opened one centimeter during the day, and others were found west of the Highway.

Seismicity and deformation changed little during the last day.

Gas emissions remain high near cracks. In this regard, the Hawaiian Department of Health warns residents that no mask sold is able to provide protection against the extremely dangerous volcanic gases emitted by the eruption. The best way to protect yourself from gases is to leave the area defined by the authorities.

Sources: HVO - USGS and photos of Bruce Omori and videos of Mick Kalber 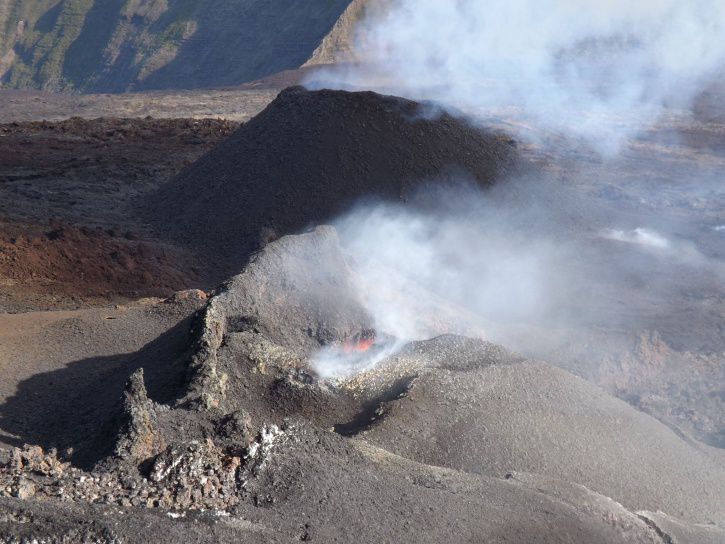 The field reconnaissance, carried out on Sunday and Monday, still shows an activity mainly focused on the central vent with a cone now completely closed from which leaks of low lava (less than 10 m above the cone) and from where a main lava tunnel starts. Lava tunnel activity is now in the majority. Few lava flows were visible these past two days, although the front is still active, many fires have been reported at the foot of the rampart, and spread vertically in about ten minutes. Firefighters, having experienced this kind of fire at the end of 2015 during the eruption of pitons Kalla and Pélé, monitor the evolution of the situation. 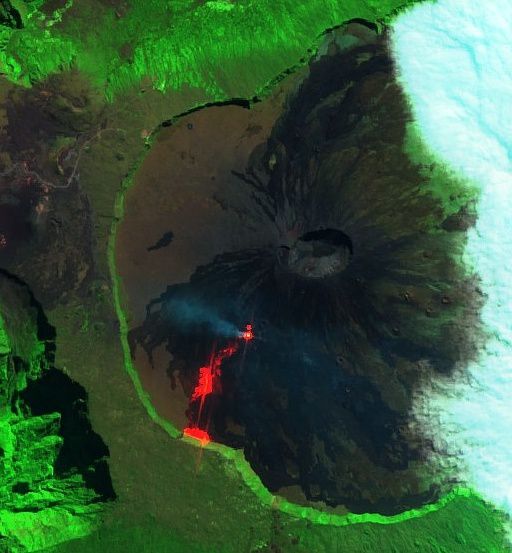 Piton de La Fournaise - the image Sentinel-2 SWIR on 07.05.2018 details the "hot" points: the active cone, the lava flow, and the base of the rampart on fire. The upstream cone always projects lava in the form of projection on rare occasions but these are very weak in intensity.

The surface flows estimated from the satellite data, via the HOTVOLC platform (OPGC - Clermont Ferrand) and MIROVA (University of Turin), recorded today were between 1 and 2.5 m3 / s.

After several days of deflation of the volcano, the deformations seem to stabilize and no significant deformation is recorded since.

A volcano-tectonic earthquake has been recorded in the past 24 hours under the Piton de la Fournaise building. Due to the continuation of the activity, the aviation code has changed from yellow to orange.