At the summit of Kilauea, ash emissions at the Overlook crater decreased on May 16; although variable, the plume contains enough ash to be gray in color. It rises between 900 and 1,200 meters above the ground, with a maximum of 3,600 meters high, before sliding north. Communities located downwind must take precautions to guard against falling ash. 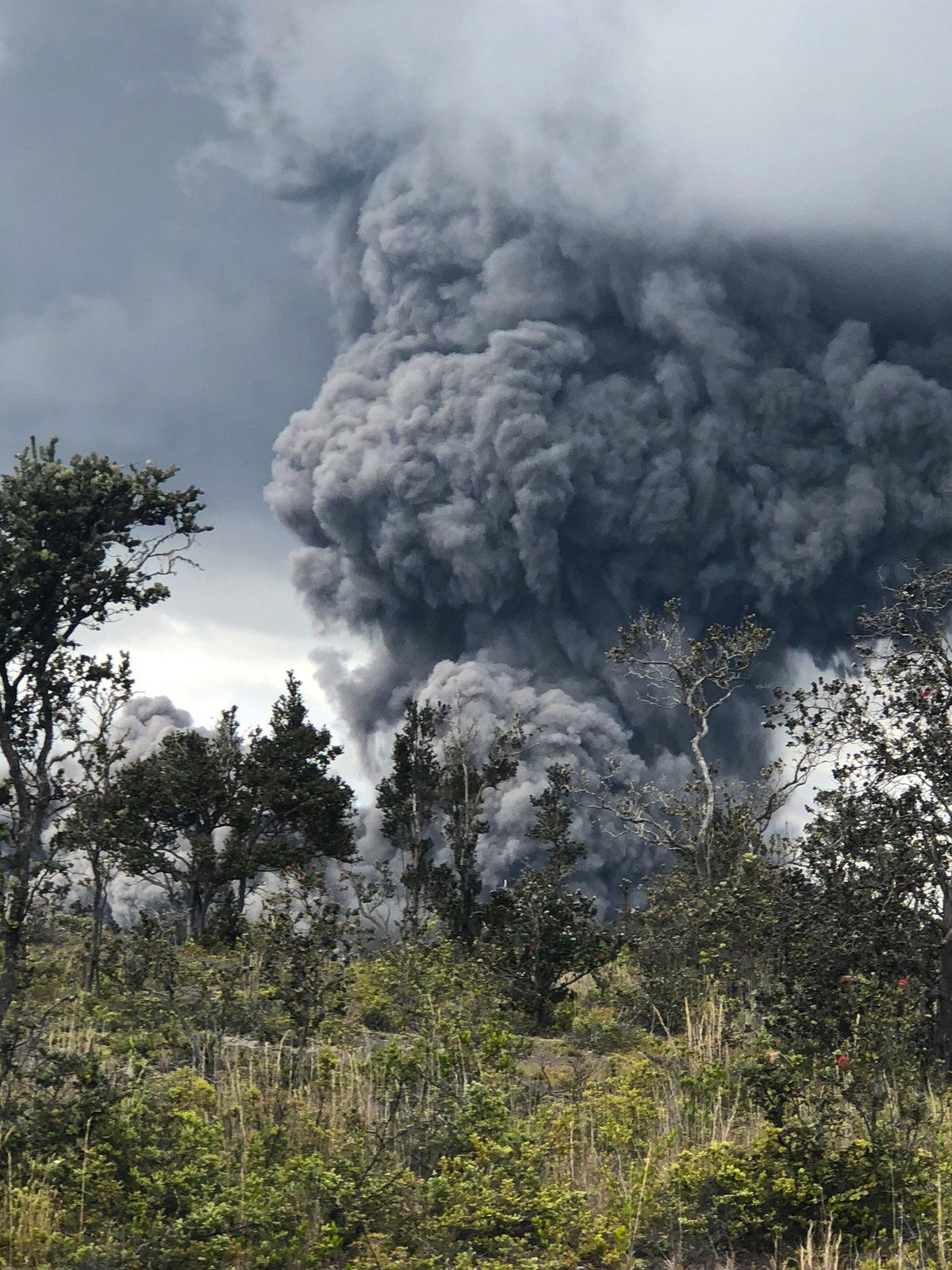 Several earthquakes of magnitude 3 or greater occurred below the summit zone; their shallow depth resulted in fractures in Highway 11, near the entrance to the Volcanoes National Park, and in damaged buildings and roads within the Park. They are attributed to the ongoing deflation and the drop of the lava in the volcano's chimney.

As of the afternoon of May 16, the floor of Kīlauea caldera has dropped approximately 3 feet (90 cm). This movement is stressing faults around the caldera of Kilauea, causing them to move and resulting in strong earthquakes of up to magnitude 4.4 thus far.

The Observatory notes that the 1924 explosive eruption was also preceded by hundreds of earthquakes during magma drainage. 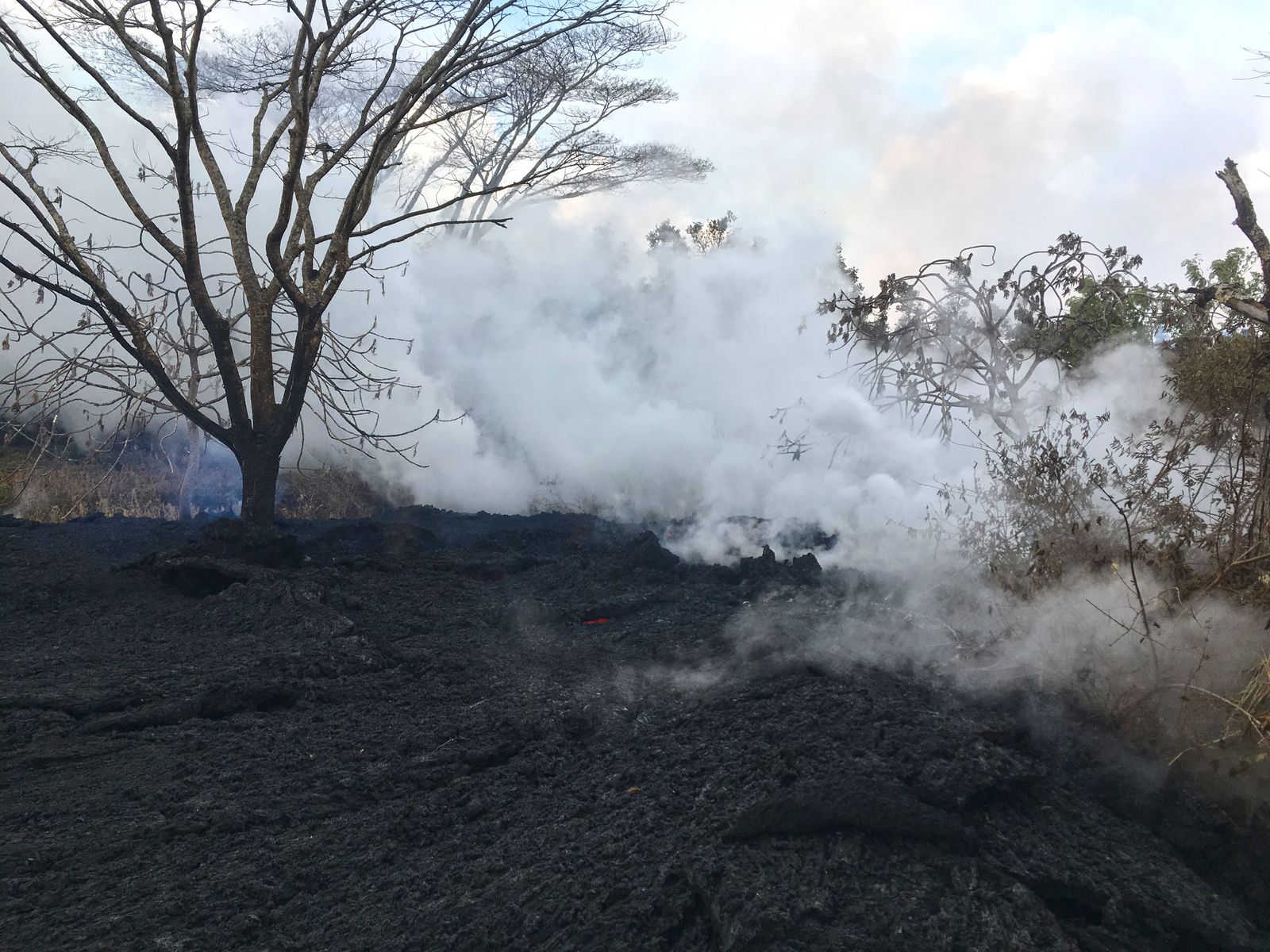 In the eastern rift, eruptive activity was concentrated on fissure 17, with less vigorous spattering, and slower lava flow in the afternoon ... the length of the flow was maintained around 2,500 meters.

Spattering was maintained between 8:20 and 9:33 in an area between the fissure 16 and 20, followed by noisy degassing.

Fissure 6, near Leilani Avenue and Pohoiki Road, has become active again; lava and spattering were noted until 4:45 pm.

Volcanic gas emissions through cracks remain high in leeward areas, and generally under low cloud cover. The RED is set for air quality conditions, with serious threats to the health of people with respiratory problems, seniors and young children. The Volcano School of Art and Science has remained closed.

The beautiful videos and photos made by Mick Kalber and Bruce Omori / Paradise Helicopters are missing today due to imposed flight restrictions ... but this is an opportunity to highlight the exceptional quality of their work. (update) At Piton de La Fournaise, the intensity of the volcanic tremor (indicator of surface eruptive intensity) has remained relatively stable over the last 24 hours at values ​​twice as high as those recorded last week. The flow activity is still predominantly in lava tubes but the resurgences are more numerous these past two days, especially at the foot of the secondary cone. This secondary cone (the most upstream at the foot of the crater Rivals) is now the most active of the two with projections of 20-30m high reported in the last 24 hours. On the cone further downstream, only low projections persist.

Inflation (swelling) of the building continues:

The GPS of the summit zone and located in far field record an inflation, respective witnesses of the putting in pressure of a superficial source and a deep source A mud volcano erupted on May 15, between 2 pm and the afternoon, in Wantan Township, Taiwan; it was produced by two mounds.

No injuries were reported, but the mud waves flooded over one hectare of farmland. The damage will impact future harvests for at least two years; assistance has been promised to the farmers affected by this disaster.

The location of these mud volcanoes, which come into activity one to three a year at this time of year, varies each year. A brief summary of the volcanic activity of the week, which you can find with more details on the Global Volcano Program Weekly report.