Eruptive activity continues in the East rift zone of Kilauea, with vigorous fountaining at fissures 22, 6 and 1,  feeding two lava flows that snake towards the ocean.

An evacuation warrant was issued for Kaupili, Mohala, and Lower Kahukai, due to the potential for lava flow to Highway 132. 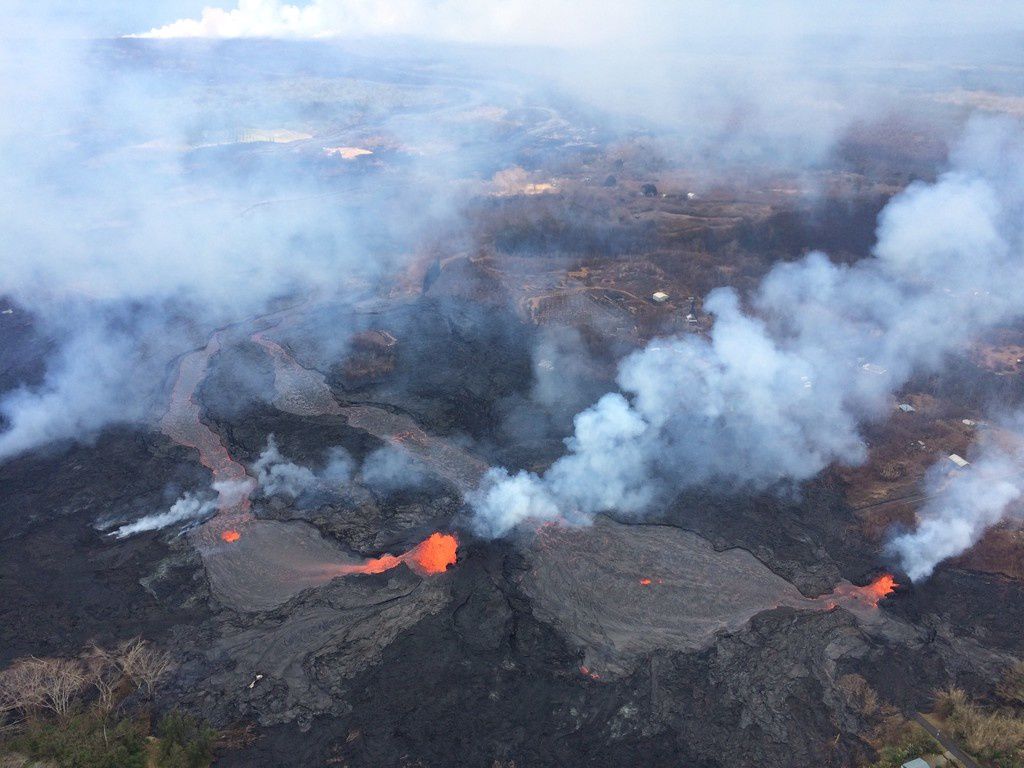 Kilauea East Rift Zone - 25.05.2018 - fissures 6 (left) and 13 (right) and the lava flows they feed towards the west entrance to the ocean - photo Bruce Omori / Paradise helicopters At the level of the summit zone, the day of May 25 was animated by more than a dozen earthquakes of Magnitude 3-4 under and around the caldera. At 4:17 pm, a small explosion was accompanied by an ash plume at 3,600 meters asl. Nasa Caltech-JPL Aria's analysis of the JAXA Sat Alose-2 data for the East Rift Zone between 8 and 22 May 2018 shows an extension of about 4 meters through the rift following the intrusion. magmatic under the area of ​​cracks and flows. 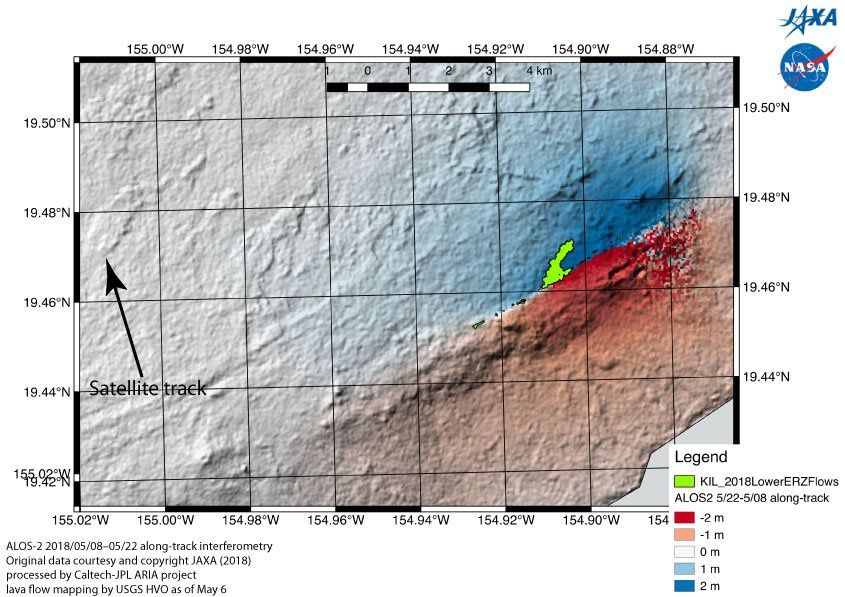 Kilauea East rift zone - extension of about 4 meters through the rift following the magma intrusion under the fissures and flows area. - Alose-2 data from JAXA / Nasa Caltech analysis - JPL Aria / via Eric Fielding

The Phivolcs reports a moderate level of instability for the Mayon and recalls the existence of the six-kilometer danger zone, due to possible sudden explosions.

A degassing on May 24 produced a 300-meter-high brown ash plume, followed by a moderate steam emission, still in progress on May 25th.

An incandescence is observed at the top during the nights. An inflation of the mid-slopes of the volcano is recorded since May 5, 2018.

The level 2 alert remains in effect. At the Piton de La Fournaise, field observations made yesterday afternoon at the end of May 25th by the "Cité du Volcan", confirm the weak activity in progress.

The flows are almost exclusively in tubes and at nightfall, a single incandescent zone in the lava field near the vent could be observed. A strong, almost continuous degassing continues.

The tremor has stabilized at a relatively low value, the inflation of the building has stopped and the surface flows estimated yesterday are very low, less than 0.03 m³ / s ... nothing more to watch. 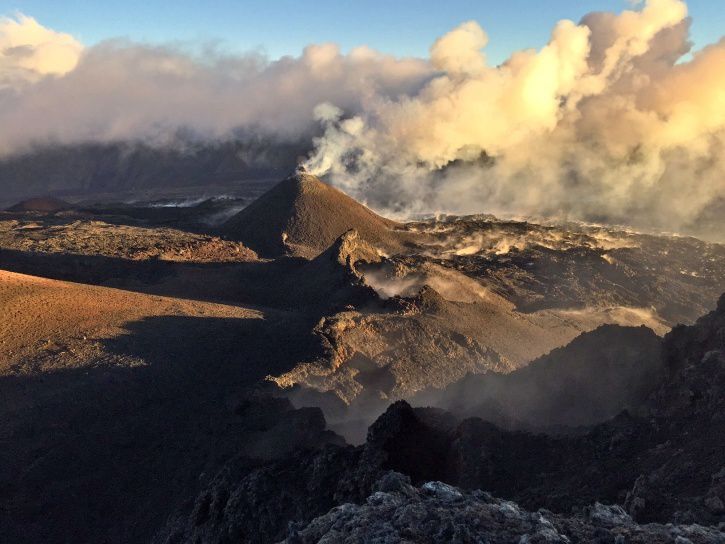 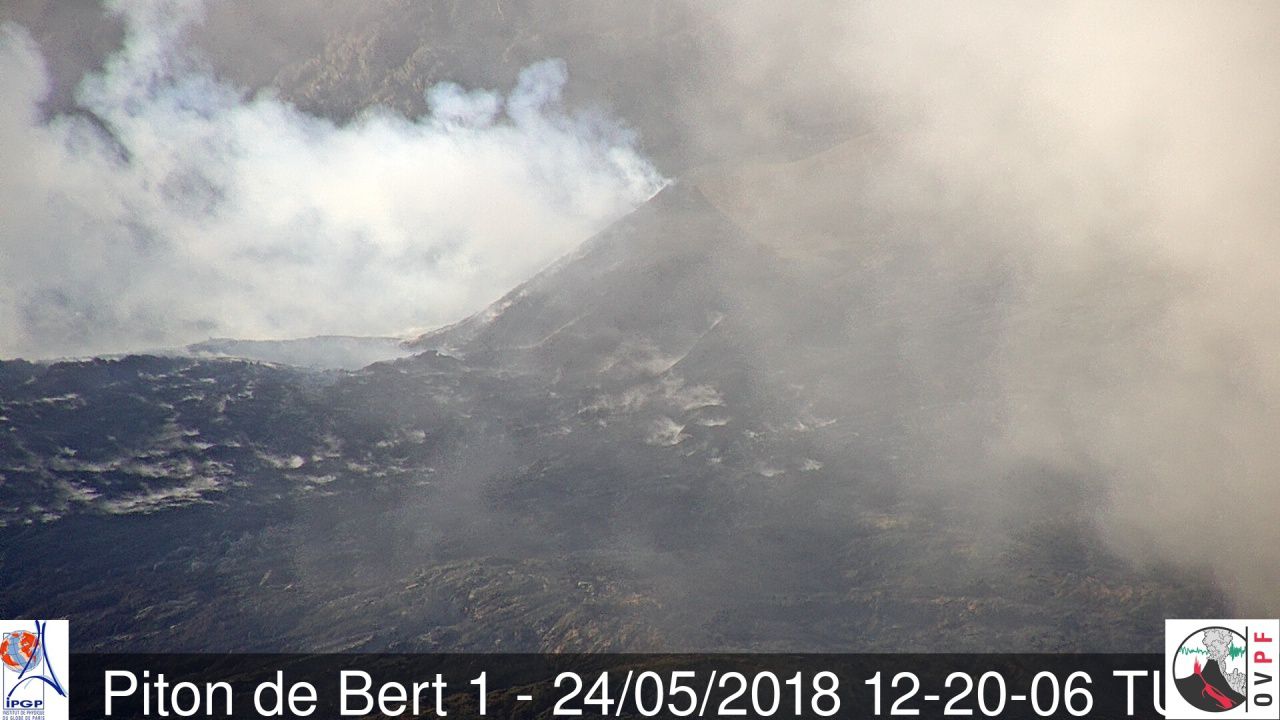 Piton de La Fournaise - top image: Evolution of the RSAM (indicator of the volcanic tremor and the intensity of the eruption) between 20:00 (16h UTC) on April 27th and 15h00 (11h00 UTC) on May 25th on the seismic station of BOR (located at the top). - bottom image: Estimation of the production rate and volumes of lava emitted from Piton de la Fournaise by Diego Coppola of the University of Turin using MODIS satellite data.

The constant rains over southern Guatemala caused the day before yesterday a lahar at Santiaguito.

On May 25, moderate lahars were observed in Fuego, in the Seca and Mineral barrages, tributaries to the Rio Pantaleón; Thirty meters wide and 1.5 meters high, they caused vibrations due to the abundant volcanic material and the carted blocks. El Jute and Lajas barrancas are also concerned.