The eruption continues in the lower east rift zone of Kilauea.

The HVO confirms the opening of a new outbreak on the morning of May 13 800 meters northeast of Hinalo St. and Highway 132.

The fissure # 17 is several hundred meters long, and produces spatters ... a lava flow has progressed from this vent.

At around 14:00 HST, a small lava buffer appeared between cracks 16 and 17, with crack stagnation; this small outbreak was designated crack # 18.

The Civil Defense reports degassing and spattering at 18h.locale. Kilauea - East rift zone: At around 1400 HST, a small lava pad (red arrow) appeared between fissure 16 and 17, with fissure stagnation; this small outbreak was designated fissure # 18.

Concerning the crater of Pu 'O'o which had collapsed on April 30th, an overflight in good weather made it possible to take images which show the deepest parts of the crater at 350 meters under the rim. 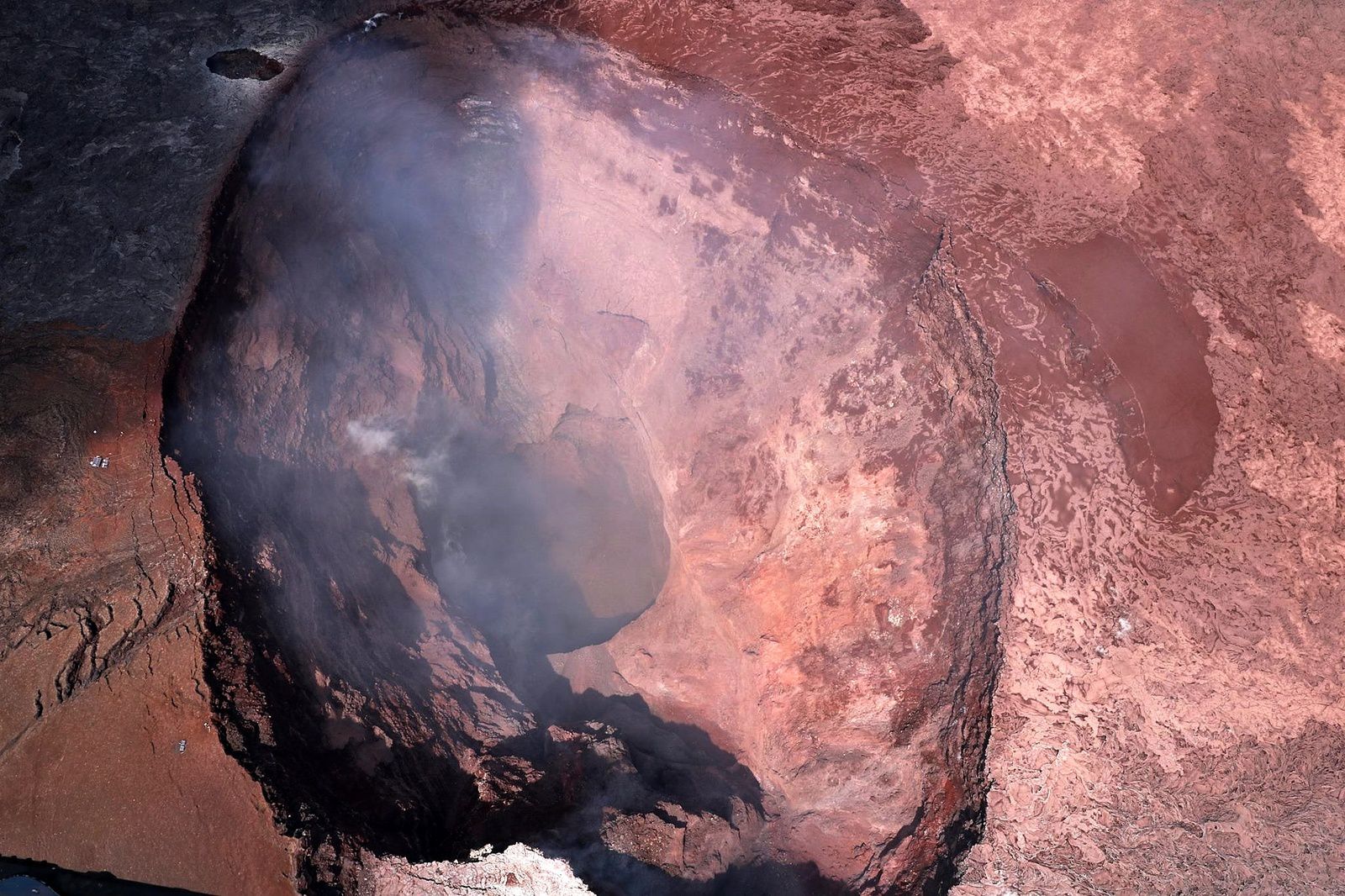 At the summit, on May 13, a vigorous plume of steam, with occasional small amounts of ash, overcame Overlook Crater, drifting southwest.

On the morning of the 13th, the HVO reports that deflation is pounding in the summit area, with high seismicity ... but Scott Rowland indicates at the end of the day that the GPS data no longer show any noticeable change. 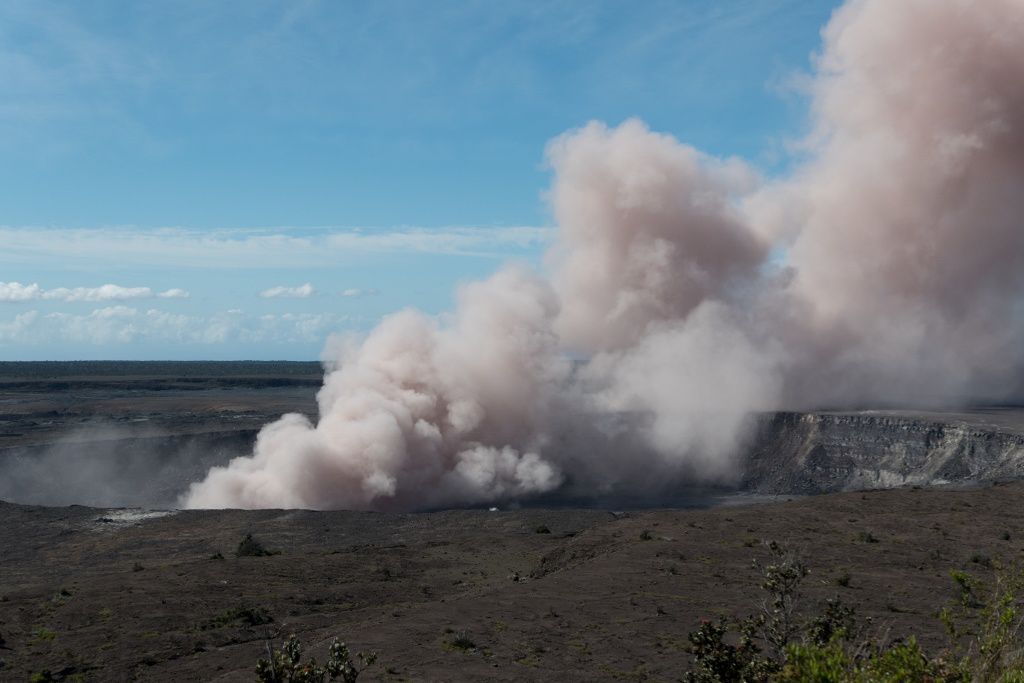 At Piton de La Fournaise, the eruption started on April 27, 2018 at 11:50 pm local time continues. The intensity of the volcanic tremor (indicator of surface eruptive intensity) has remained relatively stable over the last 24 hours.

The activity is still predominantly in the lava tunnel.

During the last two days, the morphology of the main cone (the most active) has evolved with the building of a small outgrowth at its apex and a narrowing of the apical mouth. The lava projections have become rare either at the level of this main cone or at the level of the secondary cone further upstream.

The activity now taking place mostly in lava tunnels, surface flows could not be estimated today from the satellite data. In Afar, at Erta Ale, the thermal anomaly, discribed in recent days by Mirova and the Sentinel 2 satellite SWIR, remains high and comes mainly from the distal lava field and the intracaldeira pit crater.

A weak manifestation of breakout between the position of the "new" lava lake, which no longer radiates on these images, and the distal field. In Karymsky, a moderate explosive activity is reported on 13.05.2018 by the KVERT; it is accompanied by an ash plume of 3,000 - 3,500 meters high, then extending about thirty kilometers to the southwest of the volcano.

The aviation code remains at the Orange. 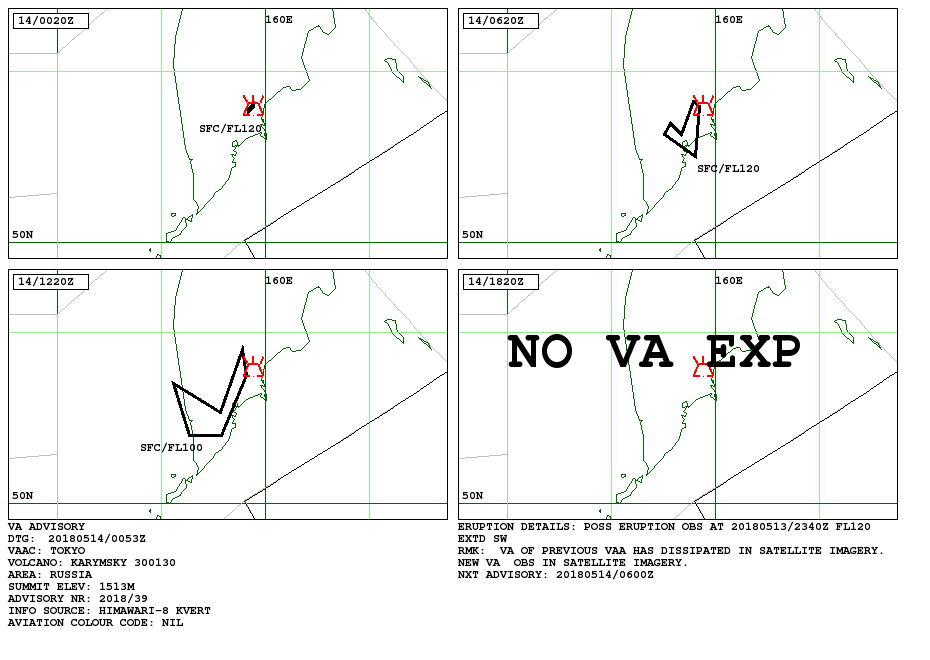 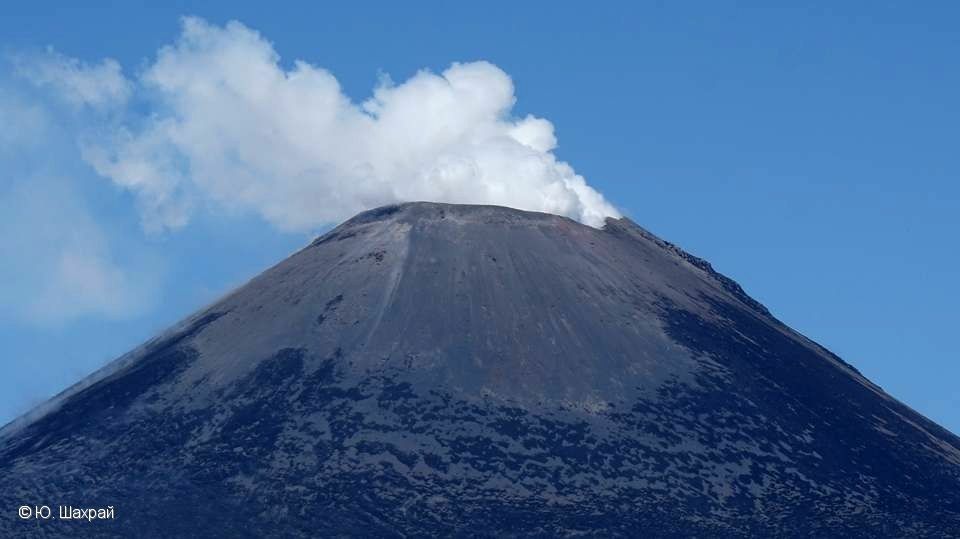 In the Norris geyser basin of Yellowstone National Park, the fifth (watery) eruption of the Steamboat geyser occurred on May 13th just before 4am local time.

The episode was recorded by the seismometers and an increase in the probe discharge that has just been replaced a few days ago.

It seems that this geyser is entering a phase of more common watery eruptions ... which does not imply a Yellowstone activity in general, but could benefit either lucky photographer during the 'summer. Actualité de l'Ibu, du Mauna Loa, du Cotopaxi et de La Palma.
Actualité du Kilauea, du Piton de La Fournaise, de l'Erta Ale, du Karymsky et du Yellowstone.
Actualité du Shinmoedake, du Kilauea et du Piton de La Fournaise.
Commenter cet article
P
Peter Frost
18/05/2018 23:01
I'm in Hawaii and there is no where on the planet I'd rather be. The story of TV, is just there for you to see.<br /> It's not anywhere close to reality.<br /> A small section in the corner of a large district, on a huge island with the area of a state like Connecticut. 230 miles around. I'm 10 miles away and can't see, hear, smell or taste a thing since it started, except for one quake and yesterday morning we had our first vog, for about an hour. Clear blue skies again today.<br /> Remember any content you see online or on MSM is EDITED for MAXIMUM click appeal. It's all about the money honey. The lava has been flowing continuously for 35 years.
Répondre
B
Bernard Duyck
19/05/2018 10:57
Agree with you ... our interest as volcano lovers is to report anything related to the current eruption .<br /> D'accord avec vous ... notre intérêt, en tant qu'amateurs de volcans, est de rapporter tout ce qui a rapport avec l'éruption en cours.