Activity of Guatemalan volcanoes, Kilauea and baptism of Piton Jasmin. In Guatemala, heavy rains have generated lahars in Fuego and Santiaguito.

At Fuego, a lahar is observed in the Ceniza gorge on 13 June; of 25 meters wide and 2 meters high, it carries fine and pasty materials, blocks one to three meters in diameter and tree trunks. Another lahar has taken the Las Lajas barranca, 30-40 meters wide and 3 meters high, characterized by the transport of similar materials. At Santiaguito, moderate lahars are reported from 12:20 and from 14:15 in Rio Nima, a tributary of Rio Samala; Large 18 meters high and 1-2 meters, the last episode is loaded with volcanic materials, blocks up to a diameter of 2 meters and partly frontal, shrubs and tree trunks. The Pacaya, after an increase in activity for several months marked by Strombolian explosions and lava flows, is produced on June 13 a sustained column of fine ash and gas, amounting to 3,500 meters asl. and dispersing north and northeast 10 km.

The RSAM graph shows periods of increased activity, mainly related to the tremor signal produced by the rise of magma towards the surface.

The operations were suspended for more than 2 hours at La Aurora airport. In the eastern rift zone of Kilauea, the height of the lava fountains within the spatter / cinder cone growing on fissure 8 has slightly decreased; they continue to feed the lava flow channeled towards the ocean. Small and rare overflows are reported. 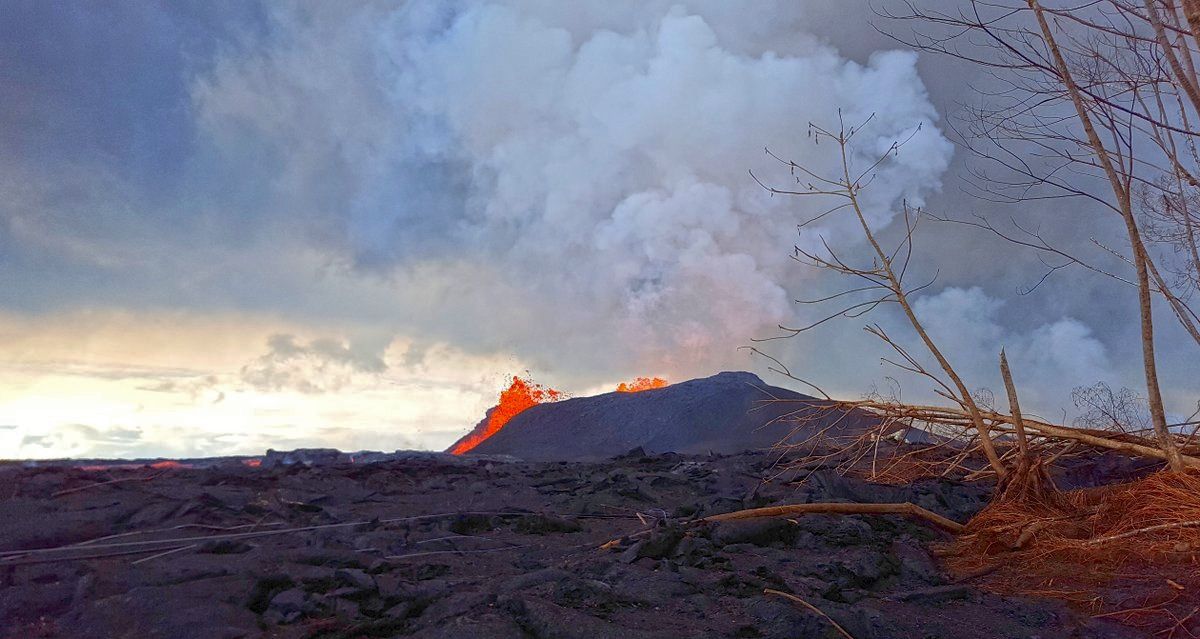 Limited spattering activity and small flows are still observed on cracks 16 and 18 in the afternoon of June 13th.

At Kapoho, a plume of laze is blown on the coast at the entrance of the casting in the sea.

A small explosion was recorded at 3:39 HST at the summit of Kilauea, accompanied by a plume drifting southwest. The subsidence of Halema'uma'u continues, marked by rock falls at the walls of the crater. 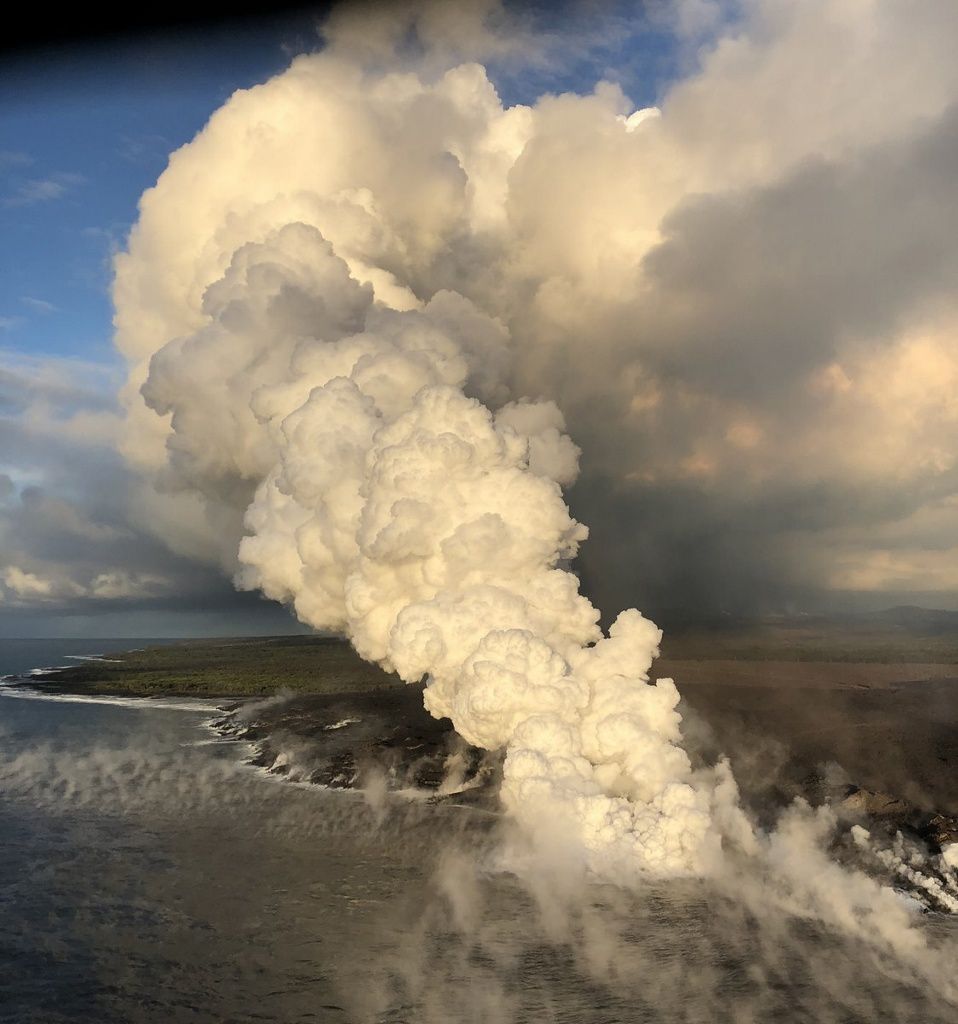 Some media are doing their "feasting" with quite normal features of this eruption, such as blue flames (methane on fire), to which are added now "a rain of gems" ... in reality, small olivines are found on the ground, a phenomenon known elsewhere on Hawaii, and others on the Green sand beach. The baptismal name of the new volcanic cone - which occurred during the Piton de La Fournaise eruption from April 27 to June 1, 2018 - is "Piton Jasmin". This appointment was made in a collegiate way between the Volcanological Observatory of Piton de la Fournaise, the Reunion National Park and the Volcano City.

"Never there" ... It is under this funny nickname that the inhabitants of the Plaine des Cafres and the lovers of the Volcano, know Joseph Jasmin. Originally from the Plaine des Palmistes, this unknown man, who lived on horseback in the 19th and 20th century, was a forestry brigadier by profession. It would have opened a large part of the hiking routes of the Massif de la Fournaise, such as the Piton de l'Eau trail, that of Piton des Neiges from the Plains of Cafres ...
He owes his nickname to the fact that he spent most of his time on the trails of the Hauts. Guide to the Volcano from the 1890s, until the 1930s at least, he notably accompanied world-famous scientists on the Volcano: Alfred Lacroix (one of the fathers of modern volcanology) in 1911, and the geographer-explorer Edgar Aubert de la Rüe in 1930.

Today, his memory is maintained by the inhabitants of the Plains of Cafres, who knew him during their childhood, and honored by the baptism of the most recent piton. 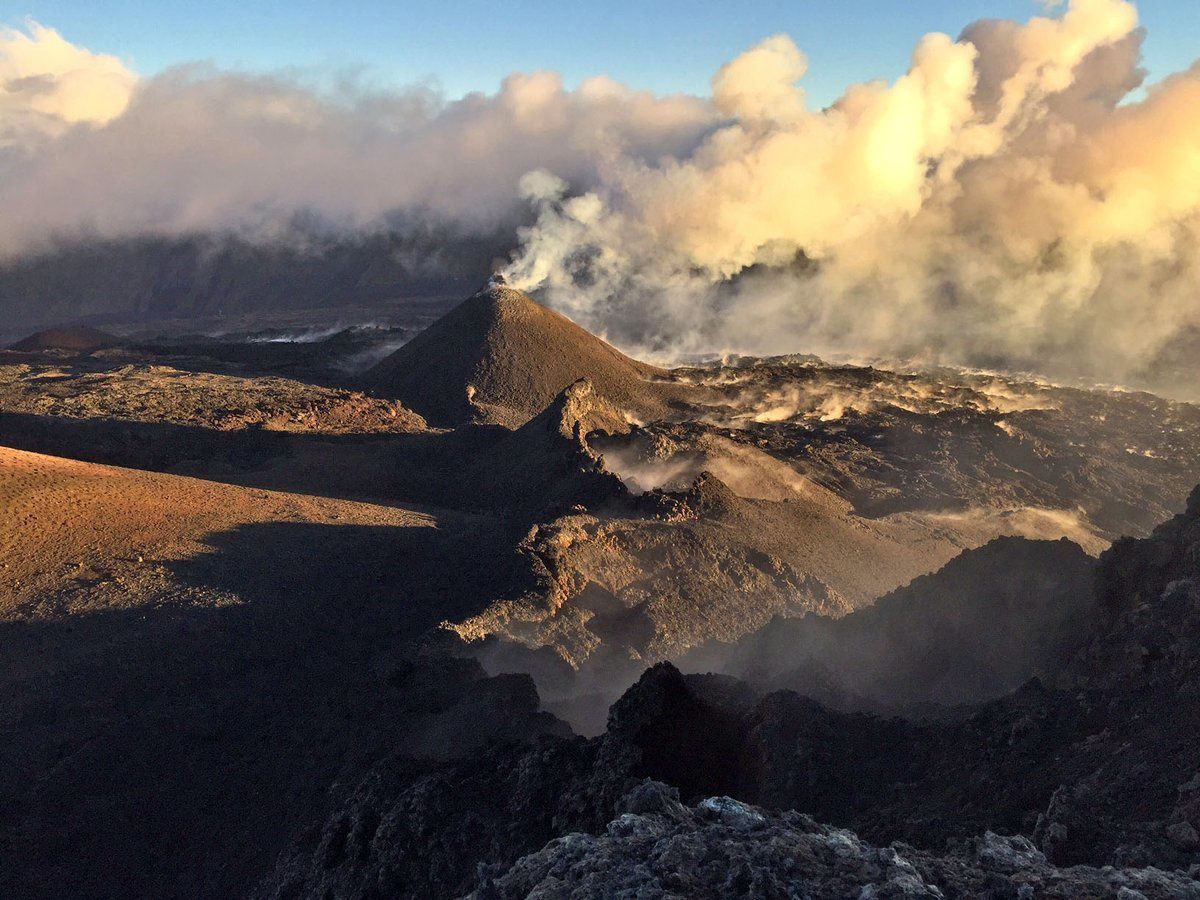