The eruption continues in the eastern rift zone of Kilauea without much change.

The lava fountains of fissure 8, surrounded by a spatter cone, continue to feed the channeled flow towards the ocean. Small overflows are observed and remain localized.

The fissure 6 was reactivated in the night of 17-18, and the spattering fed two short streams near the vent.

The fissures 16/18 continues to seep out of the lava.

The entry of the lava at Kapoho is done in one place this Monday evening, and the laze is blown towards the coast. Kilauea East rift zone - Fountaining at the spatter cone of fissure 8 and lava flow on 18.06.2018 in the afternoon - USGS photo A gorgeous morning over East Hawaii allowed for a spectacular view of the Leilani flow field. Fissure eight is changing shape, but continuing to pump out a remarkable volume of lava. Much of the fountaining activity is now confined within the nearly 200-foot high cinder cone Pele has built around her fountaining.

After more than 500 earthquakes (including 24 greater than 3.0 magnitude) since Sunday afternoon under the summit of Kīlauea volcano, the neighboring residents have felt a great earthquake and heard a roar followed by a plume of gas coming out of the Halema`uma`u crater at 6:13 am HST this June 18th. The plume was blown downwind at about 300 m above ground level. Seismicity has dropped sharply as it usually happens after these events and is expected to increase again during the day. Inward sagging of the edge and walls of Halema'uma'u continues in response to continued subsidence of the summit. In the Galapagos, the eruptive activity of Fernandina is decreasing, with a clear decrease in the tremor and thermal anomalies. The concentrations of sulfur dioxide emitted are also decreasing.

The eruptive activity could therefore end soon, but in previous occasions, we saw a clear decrease followed by a new start associated or not with a change of eruptive site. 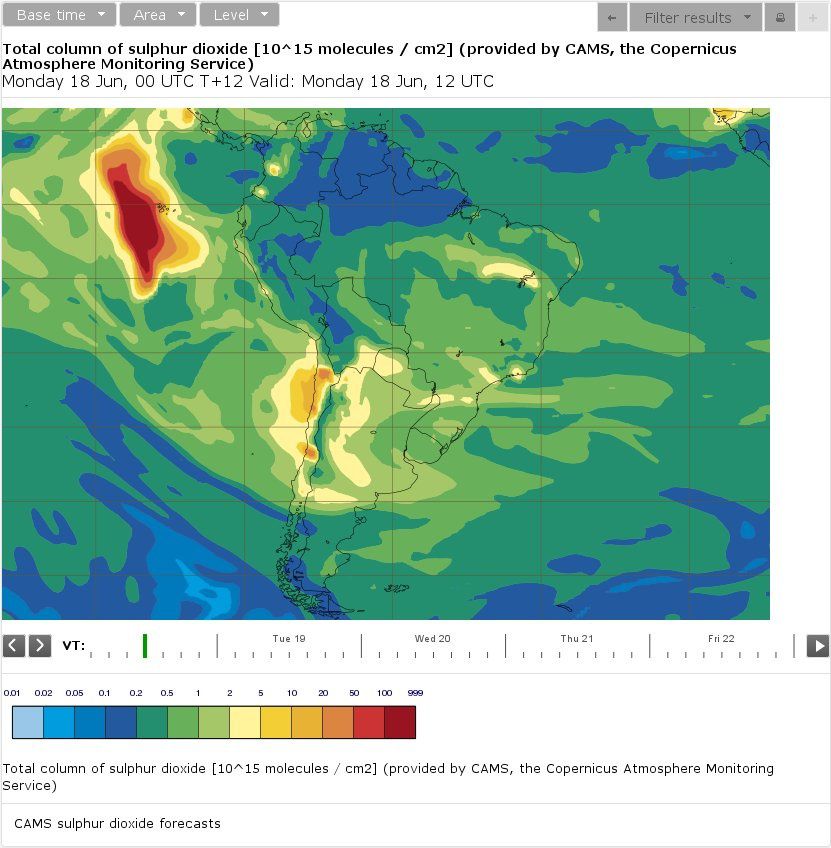 In Fuego, there is abundant outgassing, and moderate to strong explosions at an average rate of 7 per hour, accompanied by ash plumes at 4,700-4,900 meters asl. moving to a large sector south and west for 15 km.

Constant avalanches are observed in the Seca, Cenizas and Las Lajas barrancas. The heavy rains will no doubt generate lahars in these drainages as they did on June 17th. The activity of Sabancaya remains moderate this week: between June 11 and 17, an average of 17 explosions per day was recorded, with plumes of ash rising to 1,400 meters above the crater, and a dispersion of 30 km to the south and the southeast.

The earthquakes associated with the rise of the magma remain low in number and energy, and the deformation does not show any significant changes. VAAC Tokyo reports an eruption plume and ash dispersion advisory for Mayon this June 18th at 4:57 am.

The Phivolcs report, on the other hand, moderate emissions of white plumes of steam drifting to an eastern sector during the day, and 2 volcanic earthquakes in the last 24 hours.

The alert remains at level 2 / moderate level of instability.