Eruptions of Merapi, Kilauea and Langila.

The Merapi erupted this 1st June 2018 at 8:20 WIB; the plume rose to 6,000 meters, observed from the Merapi Jrakah post. The maximum amplitude was 77 mm and the duration was 2 minutes. According to the BNPB, the eruption would be phreatic. No deformation is recorded or fluctuation of the geochemical data; the extrusion of magma on the surface can take a long time, its position being estimated more than 3 km below the surface, according to data from the volcano-tectonic earthquake that accompanied the eruption.

The BPPTKG report concludes with the maintenance of the alert level at Waspada / Level II, with a 3-kilometer zone around the summit. In the eastern rift zone of Kilauea, fissure 8 continued to produce lava fountains during the night of 30 to 31.05, reaching 60 to 80 meters in height; a small cone spatter has formed on the leeward side of the fountain, and is about 30 meters high.

The fountains feed the flow to the northeast, and high eruption rates from Fissure 8 have led to the formation of a leveed channel along the western edge of the lava flow ; small overflows occur along its length, and a break in the channel walls could lead to rapid lava flow, and approach to the edge of the flow should be avoided accordingly. 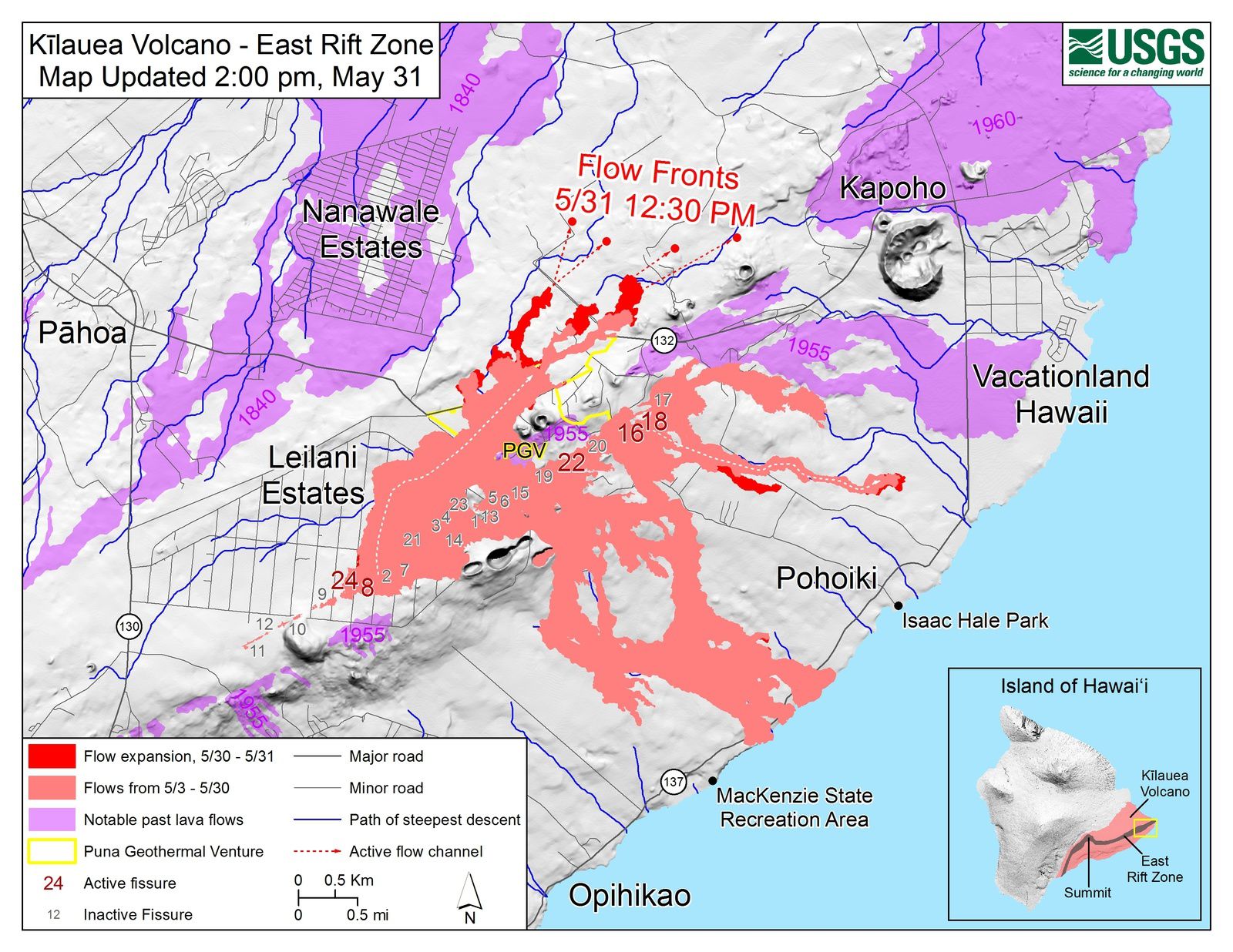 Kilauea East rift zone - 31.05.2018 - the huge river breached it's deep channel this morning to send another new flow over the banks near the top of Pohoiki Road. - photo Bruce Omori

An additional activity occurred during the night at crack 7/21; the crack 18 is also active, but the lava flow that comes from it has stopped its progression.

The activity at the summit remains in the norms of the previous days. The photos of Langila volcano in Papua New Guinea, erupted since April 2, 2016, are rare enough to be mentioned as soon as they are published.

The Langila consists of a group of four basalto-andesitic cones, overlapping on the eastern flank of Talawe's extinct volvan; the latter is the highest volcano in the Cape Gloucester area, northwest of New Britain.

Frequent explosive eruptions, sometimes accompanied by lava flows, have been recorded since the 19th century from three active craters on the summit of Langila.