The day of June 1 at Merapi was marked by three eruptive episodes.

The first phreatic episode, at 8:20 WIB, lasting 2 minutes, was accompanied by a plume rising to 6,000 meters, as described in the article yesterday. 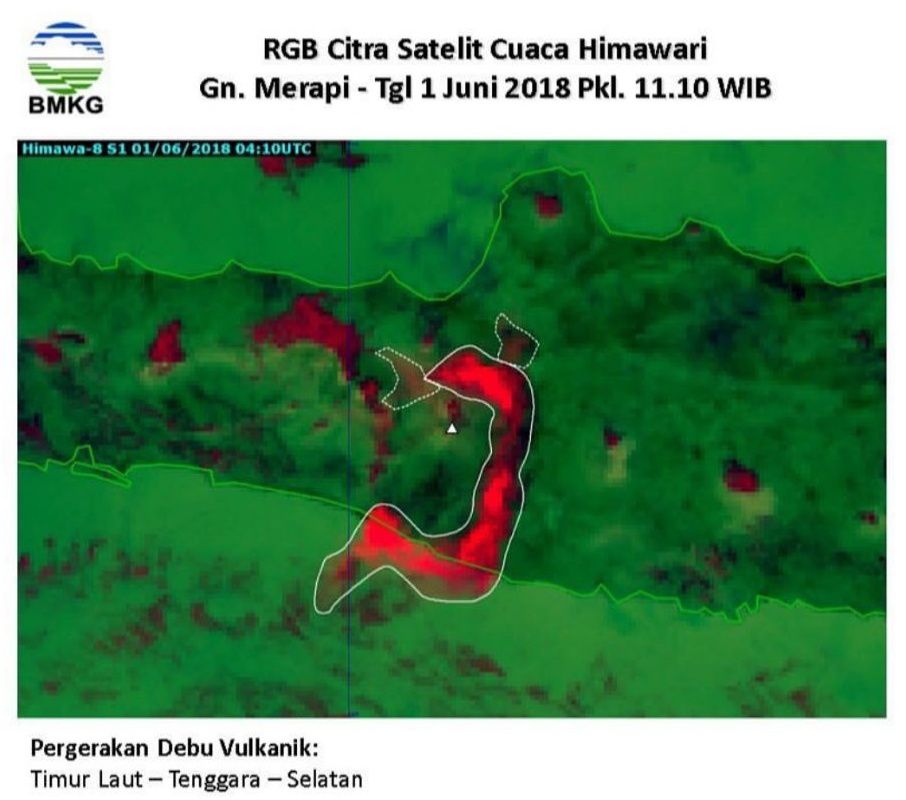 At 20:24 WIB, there was a new eruption at Mount Merapi with a maximum amplitude of 64 mm, lasting 1.5 minutes with a 2500 m high eruptive column dispersing to the northeast, observed from the PGM post Jrakah. 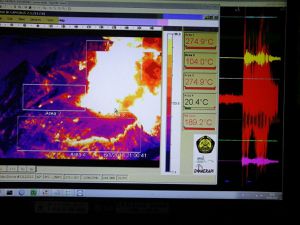 Merapi - control screens of the eruptive episodes of June 1st, respectively at 20h26 and 21h - one click to enlarge - Doc. BPPTKG 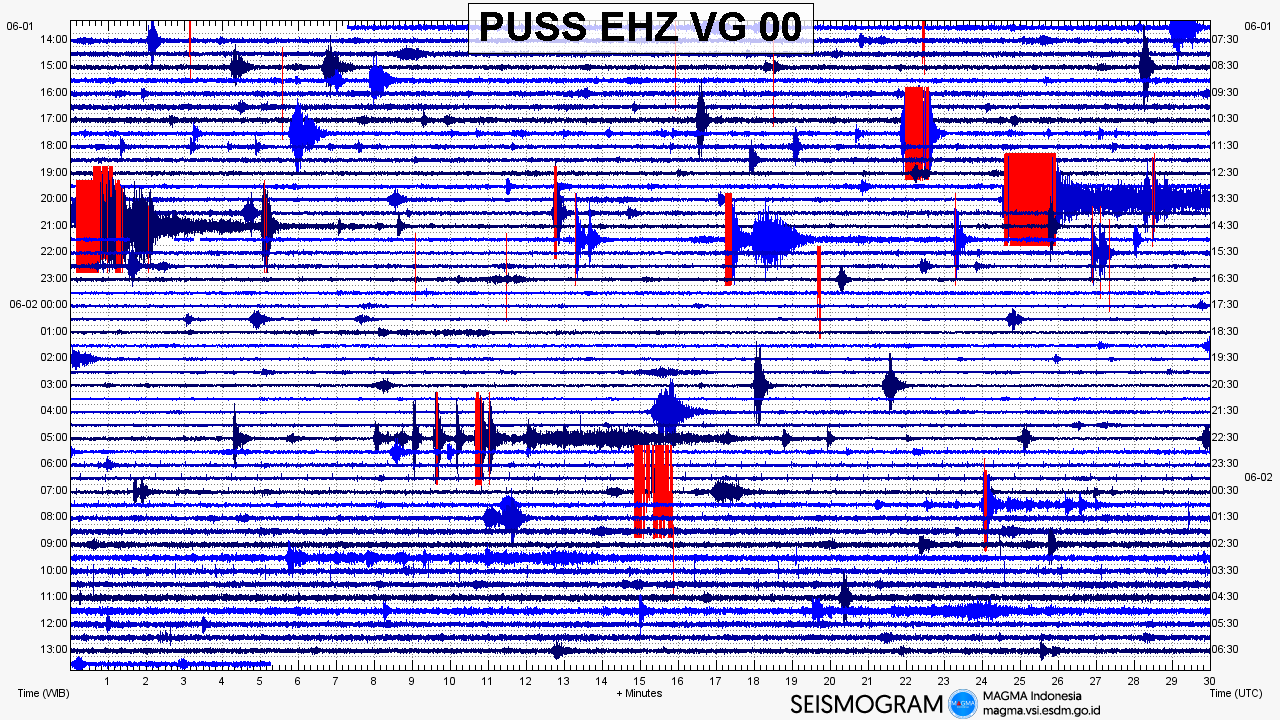 This June 2 at 5:18 local, a photo taken by Oystein Lund Andersen shows a degassing following a few minutes a signal on the seismogram.

The alert level of the volcano remains at II / Waspada. VAAC Darwin issued a red aviation code on 1 June at 20:30. At Kilauea, the eruption continues in the East Rift Zone.

During the night of May 31 to June 1, the lava fountains of crack 8 continued to feed the channelized lava flow to the northeast; minor overflows occurred, including at several locations near the intersection of Highway 132 and Pohoiki road. She approaches Four Corners, the crossing between Highway 132 and 137, strategic point of circulation.

The crack 18 and its associated flows are only weakly active. At the top, ash emissions have declined over the past few days ... reflecting an accumulation of rubble at the base of the Overlook vent.

Radar images taken by the Italian Space Agency's Cosmo-SkyMed satellite system between 23 and 31 May 2018 / 18h HST show not only an expansion of the Overlook vent, but also the expansion of the Halema'uma'u crater itself. same, on its southeast part mainly. These changes result in rocky collapses in the top vent, which covers its rubble floor.

On the 1st of June in the morning, the summit plume is whitish, composed mostly of vapor and gas. Kiluaea - crater Overlook on 31.05.2018 - An aerial view of Halema'uma'u at the summit of Kīlauea Volcano captured from an Unmanned Aircraft Systems (UAS) overflight video

Some features of this fissural eruption :

- The lava fountains of fissure 8 form of reticulite: an extremely delicate deposit formed of highly vesiculated (98%) and friable basaltic glass.

- Many Pelé hairs, and tears of Pelé are produced and transported remotely ... can cause irritation of the skin, mucous membranes and eyes, which should be protected. 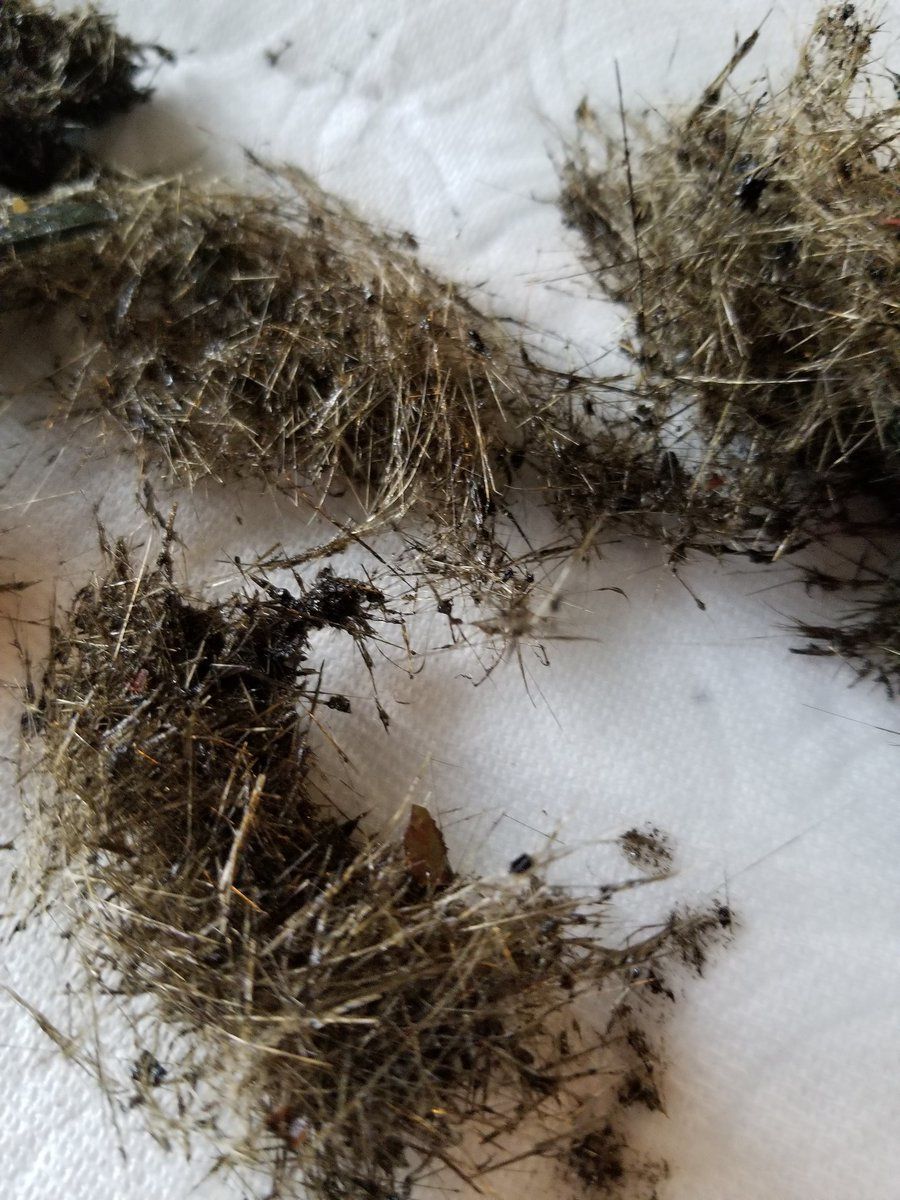 - USGS scientists have also noted the formation of particular clouds associated with the fissure rash in the vicinity of Leilani Estates: pyrocumulus, or flammagenic clouds.

These cumulus clouds can form storms ... induced indirectly by the eruption. - The advance of the flows on the wooded zones includes the destruction and the burial of vegetation. The combustion releases methane, which moves in the cracks of the ground, and can explode or burn with blue flames. The transition to the backup phase is accompanied by access still prohibited to the Enclos, as justified by a statement from the Prefecture.

Despite the end of activity from the geophysical point of view and the stop of the feeding (end of the tremor, vibration associated with the path of the magma and the gases which it contains), an eruption remains probable in the days and hours to come up.

Consequently and pending the exploitation of the conclusions of the reconnaissance, the public access to the Fouqué enclosure, from the Pas de Bellecombe trail or from any other path, as well as the landing of aircraft in the area of ​​the volcano, remain prohibited. The Sainte-Rose Coupé Nose Trail is also closed to pedestrian traffic from the Piton Partage due to a real danger of collapse since the April 3rd eruption.

Sources: OVPF and Prefecture of Reunion