50 years ago, the last day of Cerro Arenal.

Known as Cerro Arenal or Cerro Costa Rica by locals in the 20th century, it was not a danger to them, and was not known as a volcano.

Five hundred years without known activity make disappear the danger of memories, especially as the cerro was wooded to the top, like its neighbor Cerro Chatto. 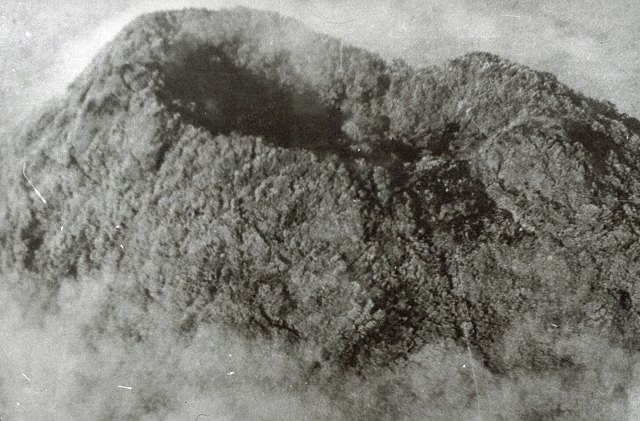 Only photo of the Cerro Arenal summit, before the eruption of 1968, taken by Y. Monestel, 1968 (courtesy of Jorge Barquero, OVSICORI-UNA)

The Cerro Chatto, and its crater lake, are close to the Arenal; the two neighboring volcanoes border the Arenal lake.

Its formation dates back to 7,000 years ago, making it the youngest of the Costa Rican volcanoes.

Some fumaroles in 1937, 1951 and 1959 should have already put on alert; colorless gas emissions on the north-east flank in 1965, the drying up of Lake Cedeño in 1965 on the north flank, and the increase in the discharge temperature of the hot spring waters on the Tabacón River in 1967 were not no more alarming.

Two weeks before the events of July 29, 1968, cattle descend the slopes of Cerro Arenal.

A seismic swarm marks the day of July 28: the magnitude of the earthquakes is increasing over time, the strongest being of magnitude 5.1, to decrease 2 hours before the first eruption. The eruption begins on July 29 at 7:30 am with the opening of three vents; the three explosion craters are aligned east-west and will be designated by the letters A, B and C.

The initial explosion releases bombs and pyroclastic surges; on July 30th and 31st, pyroclastic flows and surges occur; the eruptive column is estimated between 6,500 and 10,000 meters.

This explosive phase is followed by small ejections of ash between 1 ° and 12 August, then fumaroles until 13 September.

A new explosive phase begins on September 16th and lasts until September 18th. On September 19, begins the emission of a lava flow in blocks which advances at the rate of 10-30 m. by day, reaching in November 2,500 meters long near the river Tabacón.

The physiognomy of the volcano has changed: the pre-existing crater is named crater D; Crater A (1060 m asl), the main source of devastating explosions, is bordered with tephra and blocks up to 50 meters in diameter. Craters B (at 1160 m.asl) and C (1400 m asl) are smaller than Crater A.

This tragic activity caused the death of 89 people, including about 70 in Pueblo Nuevo and Tabacón. The Arenal has been in almost constant activity since the eruption of 1968, with lava flows, pyroclastic flows and explosions, strombolian most often. Although the lava flows have reached the base of the volcano, they have been confined in drainages, without significant impacts on populations since 1968. The Arenal - in 1969 - photo Germán Herrbar / Fotos antiguas of Costa Rica. - a click to enlarge