At the Piton de La Fournaise, the eruption started on July 13, 2018 between 03:30 (beginning of the tremor recorded on the OVPF seismic stations) and 04:30 (first light visible on the OVPF webcams) local time was reduced on July 13 around 18 h , with three zones of explosions and not very active flows; it stopped this July 13 at 22:00 local time, after a phase of continuous decay of the tremor and about 3 hours of gas pistons ("gas flushes" typical of the eruptions of Piton de la Fournaise). 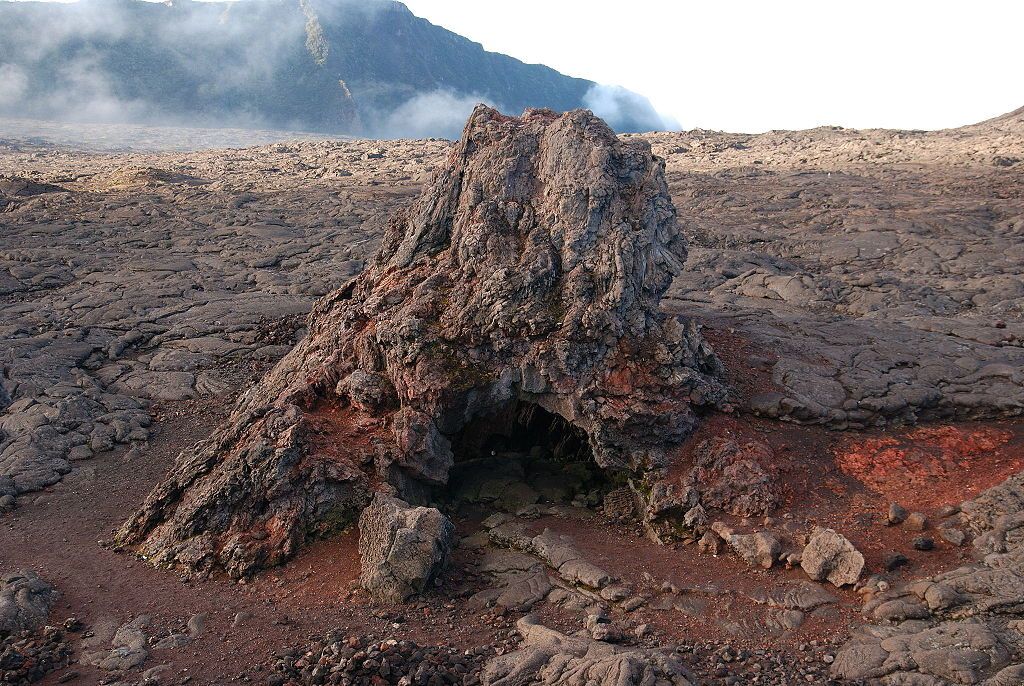 Piton de La Fournaise - Rosemont Chapel, one of the hornitos ... before his disappearance - Dunog photo

It should be noted that this ephemeral eruption erased the Rosemont Chapel site.

This geological formation, listed since the 18th century in writings relating the first expeditions in the Enclos, was buried under the lava.

It consisted of three hornitos developed straight up lava tunnels; these have broken down facilitating the projections that have accumulated around emission sites.

The draining of the lava at the end of the activity left a ogival cavity lined with lava stalactites.

A complete description can be read by following this link.

Level of alert: Safeguarding - While waiting for the exploitation of the conclusions of the reconnaissance, public access to the upper part of the Fouqué enclosure, from the Pas de Bellecombe trail or from any other trail, as well as aircraft in the volcano area, remain prohibited. The Nez Coupé de Sainte-Rose trail is also closed to pedestrian traffic from the Piton Partage due to a real danger of collapse. 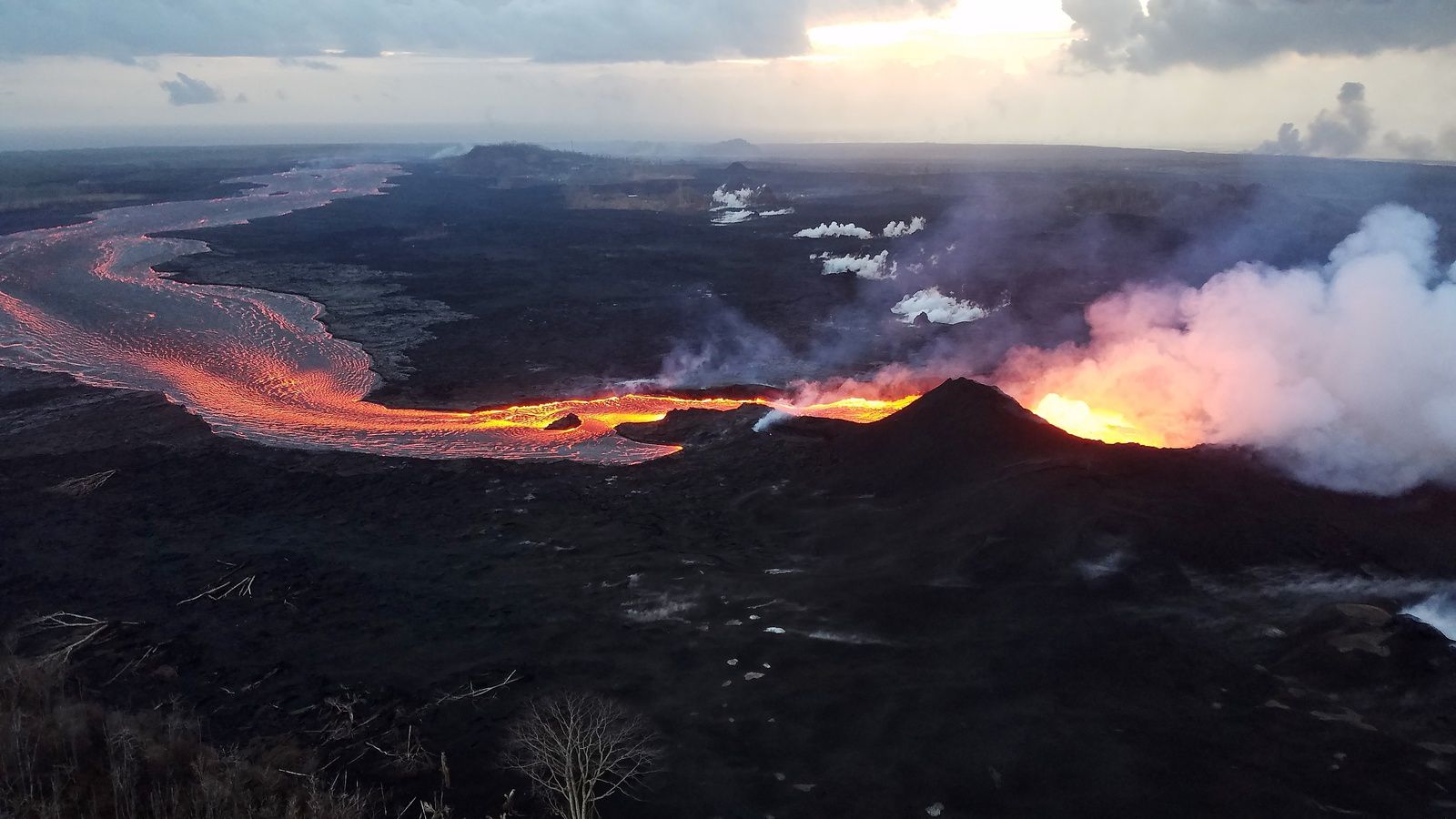 Kilauea East rift zone - 13.07.2018 - the spatter cone on crack 8, the channeled casting and the point of entry at sea signaled by a laze plume (top right) - photo HVO-USGS

In Kilauea, the situation of the eastern rift zone and the lava flow of fissure 8 has not changed since 12 July.

The only novelty: a small island, of 6 to 9 meters in diameter, was formed some meters offshore; it was probably produced by the lava of fissure 8, building a mound under the water and than emerged ... maybe at the place of the explosion at sea filmed yesterday by Mick Kalber (without certainty in the absence of coordinates) 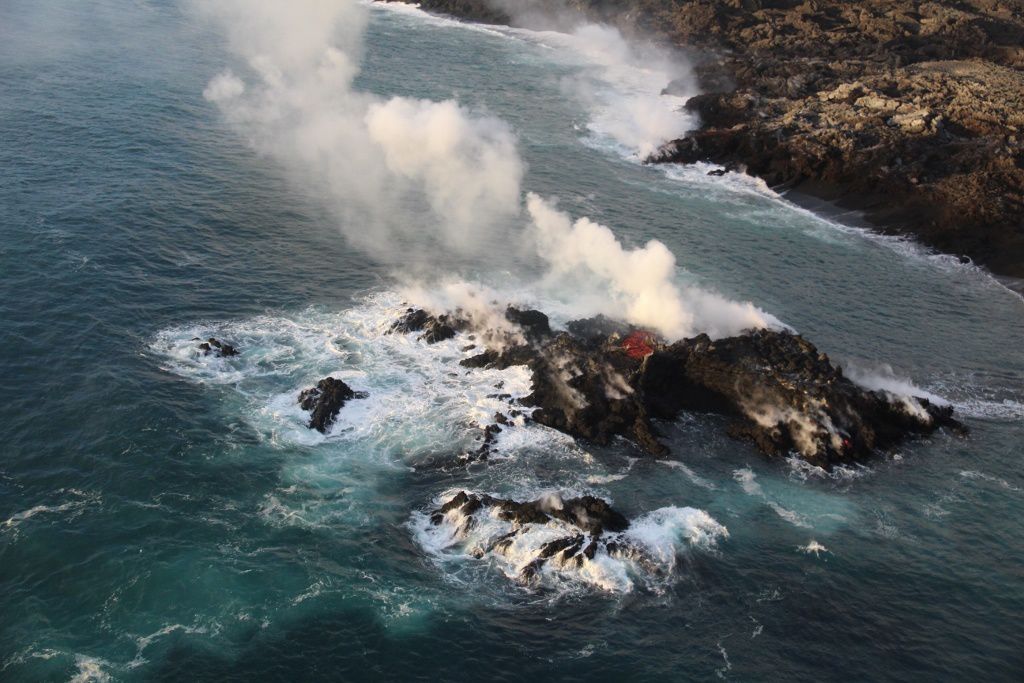 Kilauea East rift zone - up, the entrance to the lava at sea at Ahalanui Beach Park - below, the location of the site before the eruption (green arrow) photo Volcano Hideaways / Facebook

An overflight of the summit on the morning of the 13th discovered the appearance of the crater Halema'uma'u, the summit caldera and the buildings sheltering the HVO and the Jaggar  museum under the layers of gray ash emitted by the successive explosions of the last days. . Kilauea summit - the Halema'uma'u crater, the summit caldera and the buildings housing the HVO and the Jaggar museum under the layers of gray ash - photo HVO-USGS 12.07.2018

After the report of four new degassing vents in the northeast crater of Mount Etna, a Strombolian activity is audible at Bocca Nuova, whose crater is filled with swirling gas on July 12th.

Thermal anomalies were reported on July 12th and 13th, respectively by 2-6 MW and 24 MW, by Mirova.

To follow : because it is the first manifestation of the volcano since its last eruption at the new crater southeast / NSEC 14 months ago. The JMA confirms the activity returned to Nishinoshima from July 12, which corroborates the thermal anomalies reported by Mirova on July 12 and 13, respectively 17 and 37 MW.

On a video of KyodoNews, we can observe an explosive activity located at a vent on the upper side of the cone, near the summit, and a lava flow.

- JMA - Volcanic name Explanatory information on the situation of Nishinoshima volcano No. 1 - July 12, 1990 at 16:15 - JMA Department of Earthquake Volcano

In Cleveland / Aleutian arc, low level instability remains; the low surface temperatures correspond to cooling lava, as observed by the Worlview-3 satellite on July 10th. A circular lava flow 8 meters in diameter, extruded at the end of June 2018, and minor steam emissions are observed.

No significant activity is detected by seismic and infrasonic networks during the past week.