At the Piton de La Fournaise, following the seismic crisis that began shortly before midnight on July 12, the volcanic tremor, synonymous with the arrival of magma close to the surface, appeared very gradually on the OVPF's seismic recordings since about 03:30. local time on July 13th. According to the OVPF recordings, the source of this tremor is located on the northern flank of the volcano.

The first rays of eruption appeared on the OVPF webcams at 4:30 local time. Four fissures opened over 1 km long in the Rosemont Chapel area.

On the first photos, we can see the fissures sections already surrounded by spatter walls, and the lava flows on this sloping ground.

At 08:00 (local time), the 4 cracks are still active with projection heights not exceeding 20 m high. The flows that flow from it propagate over distances of the order of 200 m.

The Prefecture has triggered the alert 2-2 "eruption ongoing in the enclosure". Access to Enclos Fouqué and the Nez Coupé de Sainte-Rose trail are prohibited. Piton de La Fournaise - 13.07.2018 - Location of both ends of the eruptive site. In total there are 4 cracks that opened between these two points and that spread from the Rosemont Chapel to Formica Leo (© OVPF / IPGP) 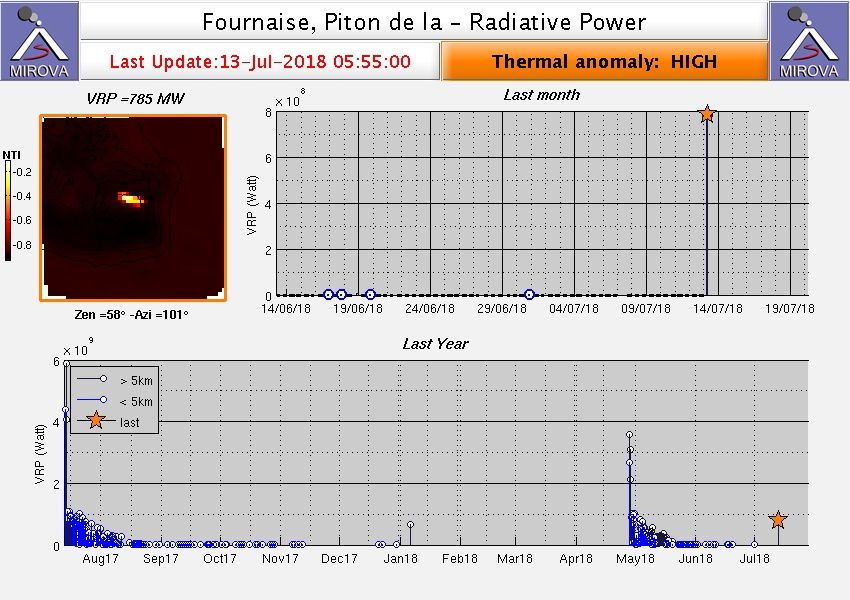 The activity of Anak Krakatau has been increasing for two days: On July 11, 56 earthquakes were recorded, and they exceeded 100 on July 12th. The tremor is continuous, with an amplitude of 2-50 mm, dominant of 40 mm on July 12th.

That night, incandescent and projections are observed above the crater; a lava flow reached the sea from the photos taken from Sunda Strait at 50 km.

Oystein Lund Andersen reported on July 13 at 0:16 that the eruption continues, with strong explosions and vibrations felt at the observatory.

The PVMBG has defined a prohibited zone with a radius of 1 km around the crater. The VONA remains orange, set since July 7 at 17:59. Krakatau - seismograms of 11.07.2018 attesting to numerous explosions (screenshot from video by Andi via Volcanodiscovery) 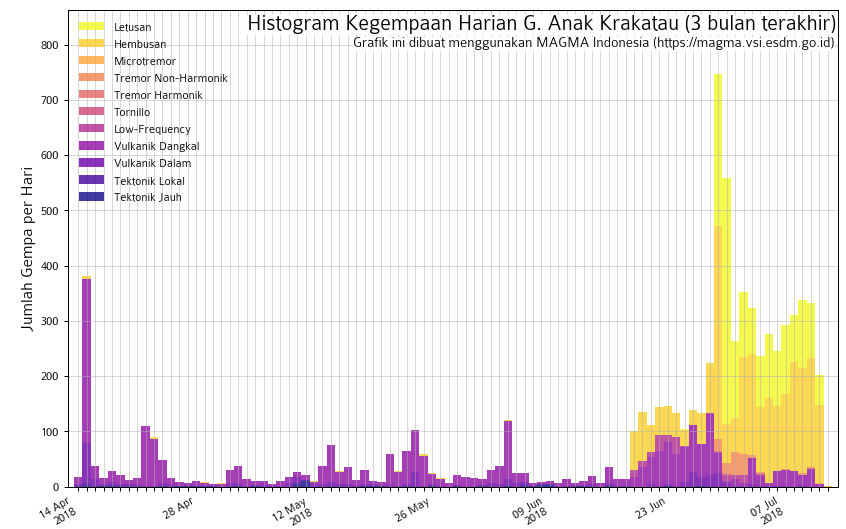 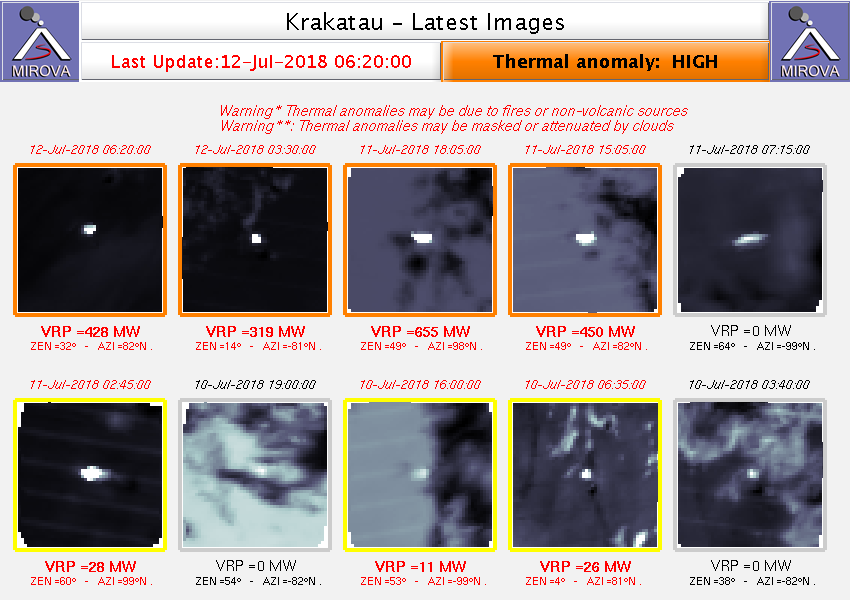 At Kilauea, the eruption on fissure 8 continues.

On the afternoon of July 11th, the huge flow deviated west of Kapoho Crater destroyed Kua O Ka Charter School and Ahalanui Count Beach Park, to form a robust new entry into the ocean, marked by a large plume of laze. Kilauea East Rift Zone - The entrance to the lava at sea at Ahalanui Park is marked by a large plume of laze (in the center-left) while the fumes are more diffuse on the rest of the ocean front. - photo 12.07.2018 / USGS On the morning of 12 July, the observatory reports a drop in the level of the channeled flow between the fissure 8 and Pohoiki road, likely to recover following a collapse at the summit.

Despite a non-visible connection with the channeled flow, the lava continues to ooze at many points of the front of the ocean, 6 km wide now. At Etna, a recent photo, taken by Gio Giusa on July 12 with Boris Behncke, shows four new mouths on the floor of the northeast crater, degassing at the same time.

Activity continues in Pacaya, Sierra Negra, and is reported again in Nishinoshima.